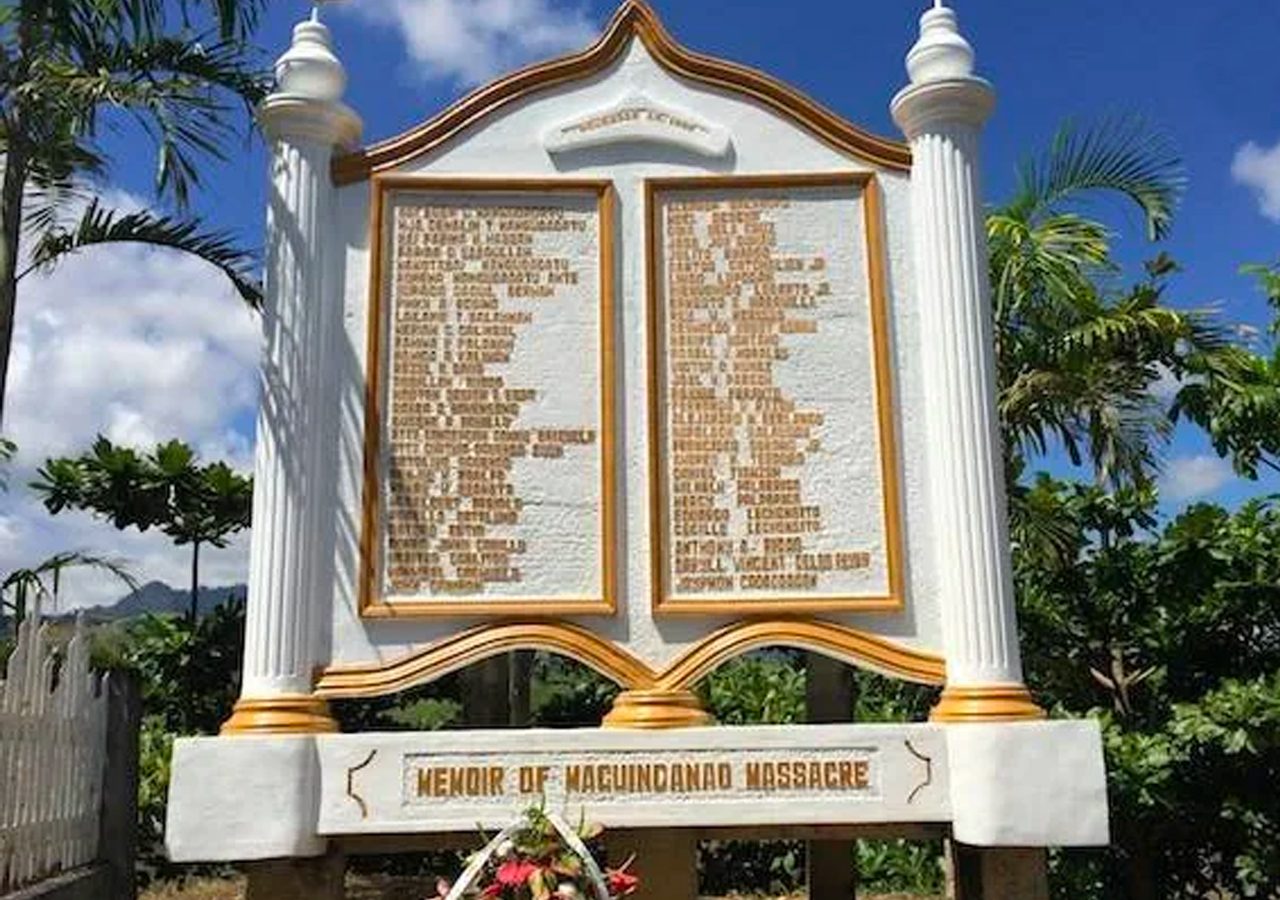 MEMORIAL. A memorial with the names of the Maguindanao Massacre victims stands in Ampatuan town in Maguindanao.

Facebook Twitter Copy URL
Copied
Relatives of the massacre victims say they are virtually left in limbo even after the 2019 convictions of the Ampatuans and their accomplices, and are clueless about what happened to the cases that are now under review

CAGAYAN DE ORO, Philippines – Relatives of the Maguindanao massacre victims complained that they have yet to obtain full justice even after a regional court convicted more than 40 people in connection to the worst case of election-related violence so far in the country.

The murder convictions are being reviewed by the Court of Appeals (CA), said Press Undersecretary Eugene Rodriguez.

Speaking for the group Justice Now, Emily Lopez said she and other relatives of the massacre victims were virtually left in limbo even after Quezon City Regional Trial Court Branch 221 Judge Jocelyn Solis-Reyes sentenced former governor Zaldy Ampatuan of the now-defunct Autonomous Region in Muslim Mindanao (ARMM), his brother former Datu Unsay town Mayor Andal Ampatuan Jr., and more than a dozen others on December 19, 2019.

Lopez said the victims’ relatives and their organization were no longer receiving updates about the cases.

“Hindi namin alam kung ano na nangyari sa kaso (We don’t know what happened to the case),” she said during an online forum organized by the Philippine Press Institute (PPI) and Journalism Studies Association of the Philippines (JSAP) on November 18.

The Ampatuan brothers and 26 others were convicted as principals for 57 counts of murder, while 15 others were meted sentences for serving as accessories in the November 23, 2009 massacre carried out in Sitio Masalay, Barangay Salman, Ampatuan town in what is now known as Maguindanao del Sur.

According to Rodriguez, 83 others remain at large while eight others were recently arrested. Another one was killed while authorities were serving his warrant.

National Union of Journalists of the Philippines chairman Jonathan de Santos said the NUJP will remain vigilant and continue monitoring the cases.

“The fight is not yet over. The 2019 convictions were partial justice. We should remain vigilant, and see to it that something like this won’t happen again,” De Santos said.

Of the 58 people who were massacred by the Ampatuans and their followers, 32 were journalists who joined the convoy that was headed to a Commission on Elections office to file the certificate of candidacy of then-Buluan mayor Esmael Mangudadatu, who was running for governor against Andal Jr.

The media death toll made it the single deadliest attack on journalists so far in history.

De Santos said the fight would be to ensure that those behind the massacre are punished.

Rodriguez said the Office of the Press Secretary (OPS) will be the one to update Justice Now about developments on the cases so the relatives would know.

“The Marcos administration does not forget these heinous crimes against journalists and is strongly committed to protecting them. The President recognizes the role of media in nation-building. He continues to acknowledge the media as a vital pillar of our democracy,” Rodriguez said. – Rappler.com