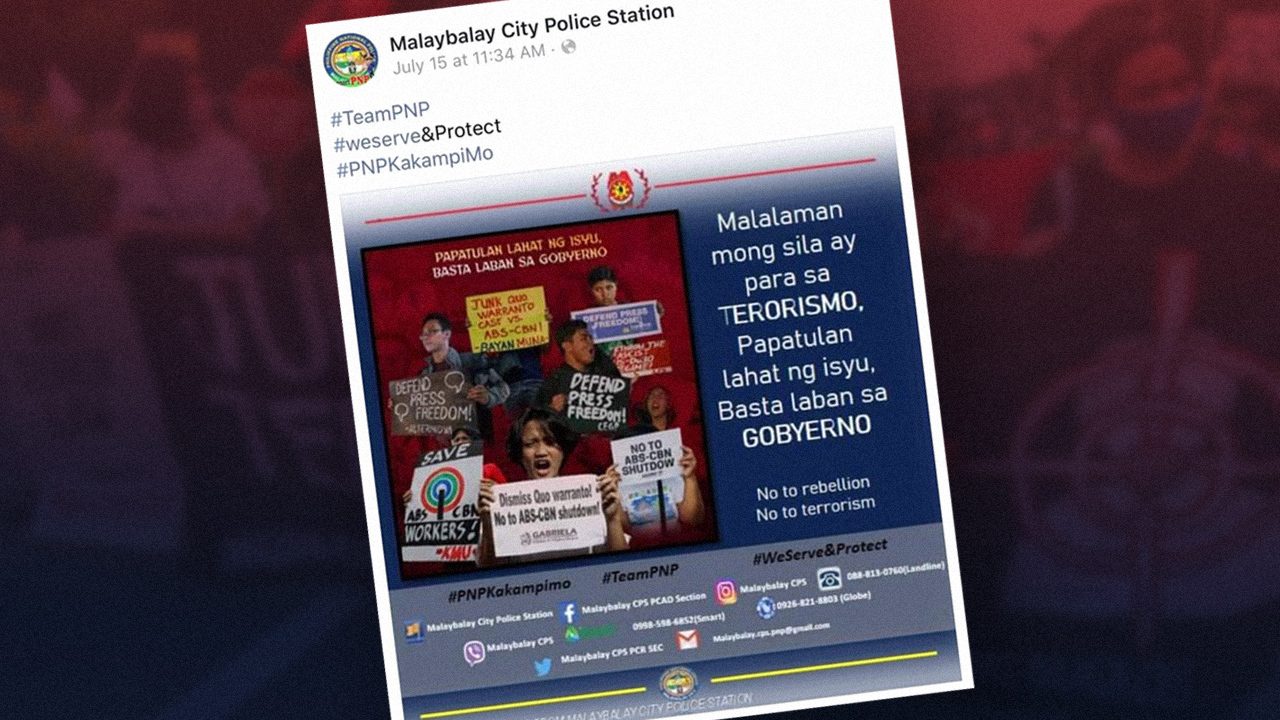 The Philippine National Police office in Northern Mindanao is investigating a recent social media post of the Malaybalay City Police Office equating calls protesting the closure of ABS-CBN to acts of terrorism.

“The Malaybalay police, through a poster on its Facebook page on July 15 but taken down as soon as protests were raised about it, basically equated calls protesting the closure of ABS-CBN and for the defense of press freedom with terrorism,” the National Union of Journalists of the Philippines (NUJP) said in a statement.

According to the NUJP, the poster “showed a collage of people from progressive organizations holding signs calling for the defense of press freedom and ABS-CBN.”

The Malaybalay City Police Office posted on Facebook, “Malalaman mong sila ay para sa terorismo. Papatulan lahat ng isyu, basta laban sa gobyerno (You know they support terrorism when they protest on all issues against the government). No to rebellion. No to terrorism.”

The Facebook post bolstered the argument of anti-terror law critics that the new law gives the Duterte government more room to define terrorism and more power to act against persons or groups it includes in that definition.

The controversial law, which is feared to target activists and administration critics due to its broad definition of terrorism, took effect on Saturday, July 18.

Northern Mindanao police Spokesperson Lieutenant Colonel Mardy Hortilloza said that they asked the Malaybalay police to delete the Facebook post, and will let the city police explain the post.

“We have already the directive not to touch that issue since it is not under our power. We ask for apology to ABS-CBN employees,” Hortilloza said, adding that they know how difficult the coming months will be for employees who will lose their jobs following the non-renewal of the network’s legislative franchise.

Hortilloza said that airing grievances is not a crime, but hurting individuals and damaging properties during rallies are crimes.

“Again our apologies to our friends from ABS-CBN and the whole media in general. We will always protect your press freedom,” Hortilloza said.

Philippine Daily Inquirer journalist Divina Suson told Hortilloza that the Malaybalay police should issue a public apology and post it on their social media account.

Radio reporter Juniel Ucat said that such violation should be penalized, to which Hortilloza replied that if the police are found guilty, they would suffer administrative sanctions.

In May, or a day after ABS-CBN’s franchise expired, the National Telecommunications Commission issued a cease and desist order against the media giant.

Lawmakers at the House of Representatives then held 12 marathon hearings on ABS-CBN’s franchise application. On July 10, the House panel on legislative franchises rejected the bills seeking to grant the network a fresh franchise. – Rappler.com