VACCINE DRIVE. Residents get their Sinovac jabs during a vaccination drive against COVID-19 at the Pasay City West High School on June 3, 2021.

Facebook Twitter Copy URL
Copied
Once all 9 million additional doses are delivered to the Philippines in October, this will make it the largest vaccine procurement of government

After the Philippines purchased an initial 26 million doses of Sinovac’s vaccine earlier this year, government officials ordered at least 19 million more, nearly doubling the country’s total purchase of the shot so far.

Vaccine czar Carlito Galvez Jr. said on Monday, October 4, that of the 41.5 million doses that had been shipped to the Philippines so far, about 2 million were either donated or purchased by the private sector. The remaining 39 million doses were purchased by government.

The latest amount is significantly larger than government’s announcement earlier in 2021 that the Philippines had signed a deal with the Chinese drug firm for 26 million doses.

Once all 9 million additional doses are delivered to the Philippines in October, this will make it the largest vaccine procurement of government. Prior to this, a deal with Pfizer and BioNTech for 40 million doses was the country’s biggest vaccine purchase for 2021. Facing questions over the government’s purchase of Sinovac’s vaccine in recent months, Galvez and other pandemic officials often defended the deals. They cited the Chinese firm’s reliability when it came to ensuring vaccine supplies were shipped to the Philippine on time – something other vaccine manufacturers had difficulty meeting.

Rappler’s tracker of vaccine deliveries showed that Sinovac seldom had shortfalls in its shipments. Delays in deliveries were also only days late at most. Of the 77 million vaccine doses that have arrived in the country, majority are from Sinovac.

Earlier in 2021, lawmakers questioned the task force officials’ seeming “preference” for vaccines developed by the Chinese drug maker, saying they supposedly cost more than other vaccines.

As of the moment, exact prices for vaccines have not been disclosed to the public. At a Senate hearing in June, government officials said Sinovac’s price remained covered by non-disclosure agreements (NDA) signed with vaccine manufacturers.

At the time, Galvez could only say that Sinovac’s shot cost “more or less” P700 per dose, and that its exact price could be disclosed to lawmakers in an executive session instead of a public hearing, to comply with the signed NDA. The situation was similar for other vaccine suppliers, Galvez said previously. 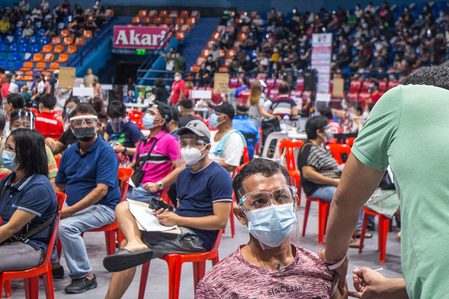 On Monday, Galvez said the government had paid for at least 39 million doses of Sinovac vaccines so far.

An updated assessment from the Health Technology and Assessment Council (HTAC) on Sinovac’s vaccine dated July 30, 2021, found that, based on projected calculations, the volume of vaccines enough to cover 12.5 million Filipinos would cost about P19.4 billion. The cost included the other needs for vaccinations, like storage and supplies.

The HTAC said the amount represented 23.52% of the government’s total allocated budget for vaccination.

With additional deliveries in the coming months raising the total Sinovac delivery to at least 50 million doses, about double the number of Filipinos covered in the HTAC’s assessment are expected to receive the vaccine.

Seven months since the government launched its vaccine drive on March 1, just about 20% of the Philippines’ population have received both doses of a COVID-19 vaccine, while some 22% received the first of two. – Rappler.com