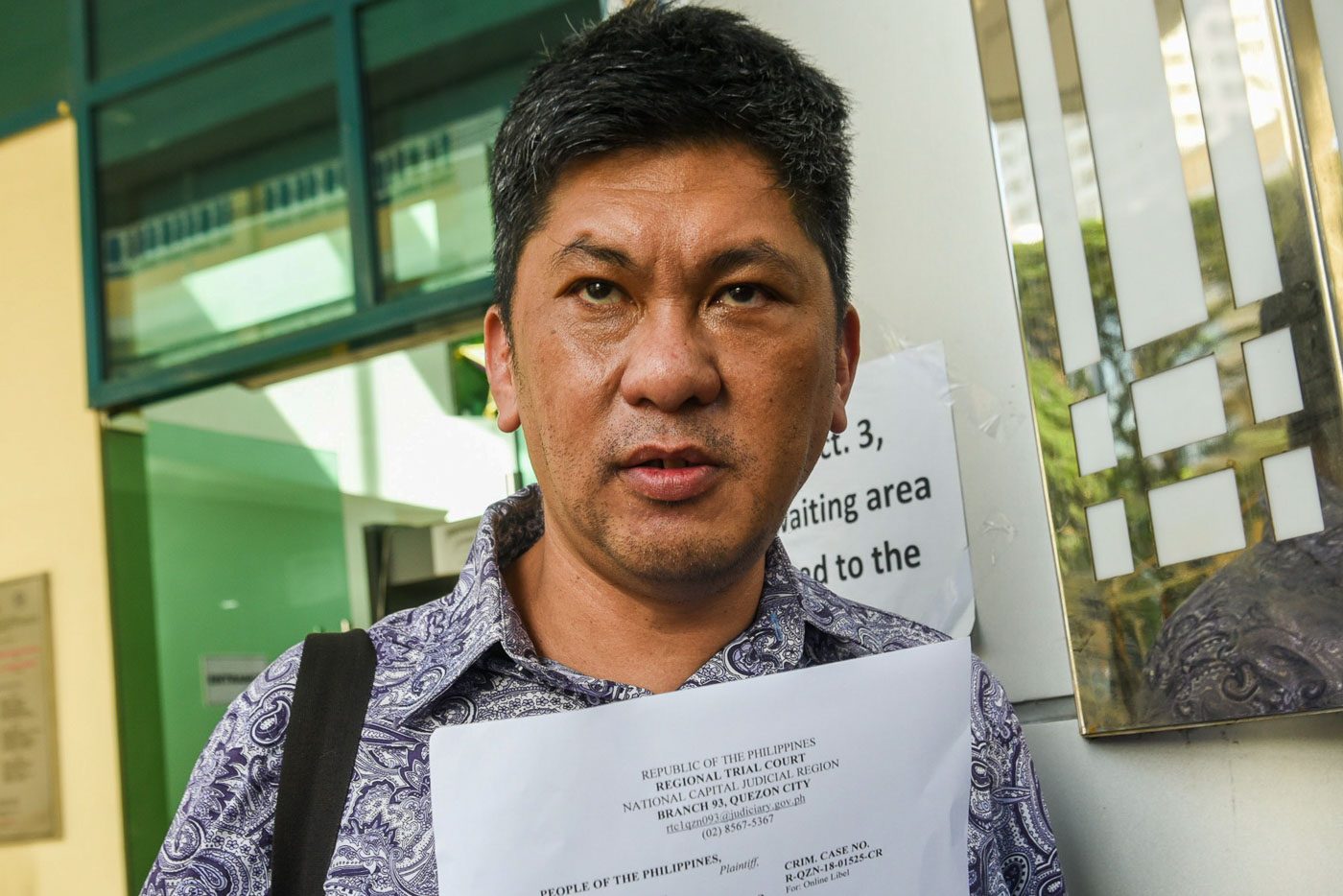 CONVICTED. Rappler correspondent Frank Cimatu attends the promulgation of the cyberlibel case filed against him by former agriculture secretary Manny Piñol at the Quezon City RTC on December 2, 2022.

On Tuesday, December 13, Quezon City Regional Trial Court Branch 93 convicted Cimatu of the cyber libel charge filed by former agriculture secretary Emmanuel “Manny” Piñol over a Facebook post from five years ago. The court set the jail time for Cimatu between six months and five years, five months, and 11 days, and ordered him to pay P300,000 for moral damages.

In a statement, the National Union of Journalists of the Philippines (NUJP) condemned the journalist’s conviction, noting that the right to free expression and press is vital, especially in dealing with public officials.

“With due respect to the local court’s decision, NUJP maintains that the right to free expression and press freedom is paramount, especially when exercised in relation to public officials. A powerful politician such as Piñol crying foul over a Facebook post of a community journalist is ironic in a [supposedly] democratic country,” the NUJP said in a statement.

The group also reiterated its position to decriminalize the country’s libel laws.

“NUJP reiterates its position that libel laws should be decriminalized as these are not compatible with the Bill of Rights stated in the Philippine Constitution and with the International Covenant on Civil and Political Rights, of which the Philippines is a state party,” it said.

The NUJP added: “Even worse is the fact that penalties for cyber libel are stiffer compared to ordinary libel. This makes cyber libel a Damocles’ sword hanging above our head, and reinforces the chilling effect that Filipino journalists need to confront every day in this benighted land.”

Nobel Peace Prize laureate and Rappler CEO Maria Ressa said Cimatu’s case once again proved how libel laws are used to attack journalists. Ressa herself has been convicted of cyber libel over a story that was published even before the cyber libel law was passed. The court said a typographical error corrected years later was considered a re-publication, thus qualifying it under the new cyber libel law.

“This is another example of the weaponization of the cybercrime law to harass and intimidate journalists. We stand behind Frank Cimatu, and, together, we #HoldTheLine,” the Nobel Peace Prize laureate said.

Altermidya Network, a network of alternative media groups in the country, said Cimatu’s conviction amplified the culture of impunity against journalists in the country.

“The court ruling amplifies the climate of impunity already reigning in Philippine society. The case serves as another reminder of how cyberlibel silences critics, even as government officials past and present should be open to criticism in the name of transparency and accountability,” Altermidya said.

“Amid a rapidly eroding civic space, libel has been used to convict journalists and attack the core principles of journalism – accountability, truth, and fair comment. Weaponizing libel promotes impunity and censorship, breeding a scenario where people expressing opinions are adjudged ‘criminal.'”

In a statement, nongovernmental organization Human Rights Watch also expressed concern over Cimatu’s case, and said libel with criminal offense is an assault to democracy.

“These rulings underscore the need to decriminalize libel and cyber libel. No person should spend a day in jail for expressing an opinion or reporting the news. Criminal libel is an assault on democracy and freedom of expression,” Carlos Conde, Human Rights Watch senior Philippines researcher, said.

#FactsFirstPH coalition said instead of attacking the press, the society must protect journalists at the time of disinformation.

“At a time when disinformation continues to proliferate on social media, it’s important we uplift, rather than stifle, the voices of truth-tellers. An attack on one is an attack on all. No one should be silenced for being critical on pressing issues. The #FactsFirstPH coalition stands with journalist Frank Cimatu and we reiterate our call to decriminalize libel,” the coalition noted.

Another coalition, Movement Against Disinformation (MAD), said the recent cyber libel convictions highlighted the fact that instead of addressing concerns, “public officials resort to weaponizing the law in order to stifle public opinion and debate.”

MAD is a group of lawyers, academics, and various groups also advocating for the prevention and stoppage of disinformation.

“Libel as a crime presents unwarranted hindrance or impediment to the performance of duties of the press, who has the duty to report on matters of public concern. It also impairs free speech of ordinary citizens as the law is a threat to a free and open debate and public participation on issues of public importance and consequence,” the group said.

The lower court’s decision on Cimatu’s case can be appealed. – Rappler.com