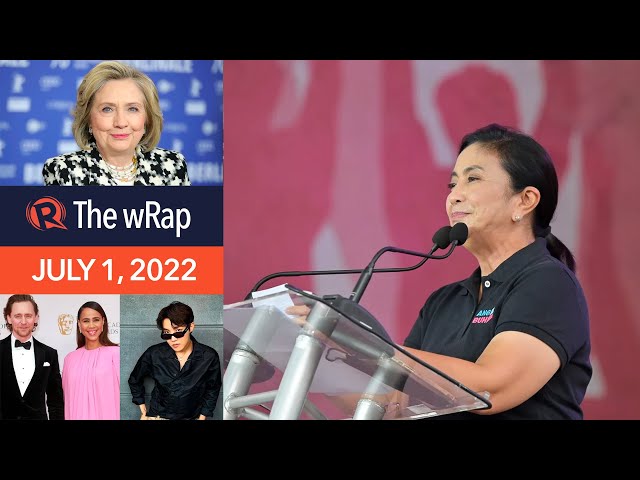 MANILA, Philippines – Former vice president Leni Robredo launched her non-governmental organization “Angat Buhay,” which she hopes would become a platform for the 15 million Filipinos who voted for her in the presidential election to do more to help their countrymen.

In her speech on Friday, July 1, Robredo said that while she lost the 2022 presidential poll, she still saw the great potential in the massive volunteer-led movement that her campaign inspired.

She urged her supporters to harness the passion and dedication they showed on the campaign trail into actively joining Angat Buhay’s advocacy work, to turn their post-election grief and frustrations into something more “productive” and would directly aid communities regardless of political color.

“’Yung challenge talaga sa atin: Papaano natin maha-harness ’yung energies nating lahat into things that are productive? And we feel like ang Angat Buhay will be the perfect platform for it,” said Robredo.

(This is the real challenge for us: How can we harness all our energies into something more productive? And we feel like Angat Buhay will be the perfect platform for it.)

Why supporters should feel triumphant despite election loss

Though she lost in the polls, Robredo considers the spirit of volunteerism that her campaign inspired to be a triumph for her supporters.

They would have only truly lost, Robredo argued, if they are to allow all their efforts to go to waste just because the elections did not go the way they wanted.

“Nasa sa atin po ang lahat para sabihin na hindi tayo failure nung eleksiyon. Naging matagumpay tayo. Because of the campaign, we were able to start the spirit of volunteerism all over the country,” said Robredo.

(We’ve got what it takes to be able to say we didn’t fail in the elections. We still triumphed. Because of the campaign, we were able to start the spirit of volunteerism all over the country.)

The atmosphere during the launch felt like a return to Robredo’s campaign sorties, although the crowd’s energy was more subdued. The NGO launch served as an event for supporters, artists, and celebrities who volunteered during Robredo’s campaign to reunite and work together again. They gave each other hugs and took selfies in groups. They spoke of being excited about working with Angat Buhay in the months to come.

Many of them came home with a Robredo painting of their own, bought from the Angat Buhay’s art exhibit to help raise funds for the NGO. Robredo is selling several of the paintings she received from her campaign supporters to finance Angat Buhay’s advocacy projects. Donors can donate any amount in exchange for a painting.

How to join, what you can do for Angat Buhay

The Angat Buhay NGO, whose duly registered corporate name is Angat Pinas Inc., will continue and build on the anti-poverty and advocacy programs that Robredo started during her vice presidency.

Several programs Robredo started as vice president – like her community learning hubs, nutrition and food security programs, classroom-building projects, and free dormitories for indigent students – will all now be continued by Angat Buhay with the other NGOs and groups they have partnered before.

Donors can make donations via the Angat Buhay app under three schemes:

Potential to become a political movement

But several analysts believe Robredo’s NGO can someday evolve into a political movement or even a political party, one that would have learned from the opposition’s fatal mistakes under the previous Duterte regime, and become a more viable movement under the presidency of the late dictator’s son Ferdinand Marcos Jr.

He said Robredo supporters do not necessarily have to think about the elections right now, but they can organize themselves this early.

“When I say it has to evolve into a political party, I don’t necessarily mean it has to compete in elections this early. What I mean is for the movement to fall into an institutional political structure so that the young people in this movement can engage in politics,” Yusingco told Rappler in May.

“I would hope that they would participate in legislation, in policy-making, in making their voices heard as a political party, not necessarily as mere individuals or groups,” he added.

This is even more crucial with Duterte leaving behind a crushed opposition and serving his successor Marcos power on a silver platter.

“A new opposition has to be born, a combination of the Left or of the progressive groups with the remnants of the other groups. The Robredo coalition can be the new opposition, but they have to organize and support whatever champions they have left,” La Viña told Rappler in June.

Before stepping down as vice president, Robredo passed the torch of being opposition leader to Senator Risa Hontiveros, the lone candidate from Robredo’s slate to clinch a Senate seat in 2022.

Still, Robredo would likely remain in the public eye. She may no longer be vice president, but trolls and propagandists backing Duterte and Marcos continue attacking her.

A Bicolana hailing from Naga City, Camarines Sur, the former vice president also said she would still primarily be based in Metro Manila to run the Angat Buhay NGO.

Robredo’s office would be located on the second floor of the “Museo ng Pag-asa” she will be opening in July. This museum will showcase the many gifts she received from supporters during the campaign and will tell the “awakening story” of Filipinos in 2022. – Rappler.com