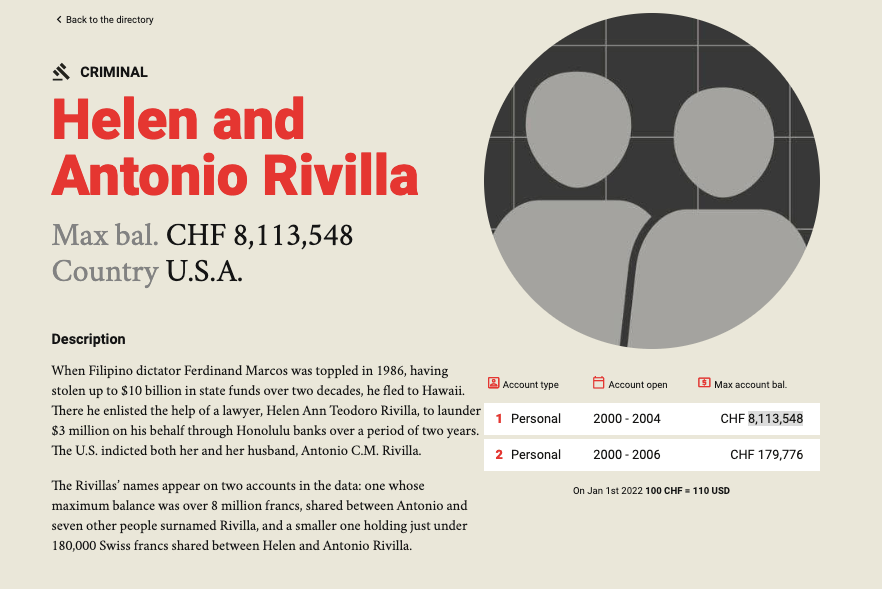 Screenshot from the OCCRP database.

Facebook Twitter Copy URL
Copied
2nd UPDATE. Helen Rivilla admitted to a US court in the 90s that she opened bank accounts and withdrew money there on the instructions of the late dictator Ferdinand Marcos 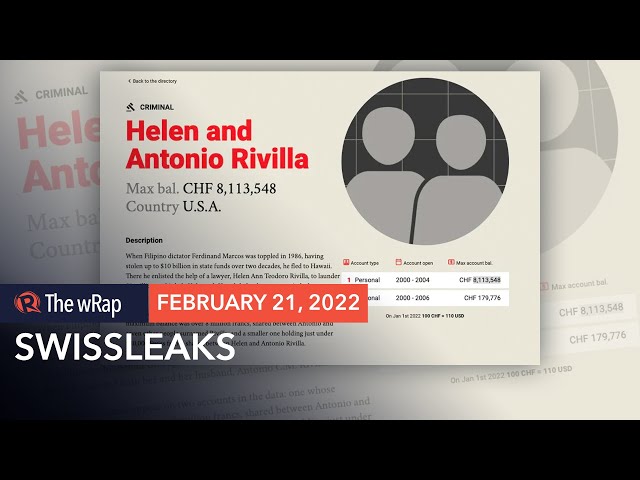 MANILA, Philippines – New massive leaks from Swiss bank Credit Suisse reveal that a Philippine lawyer who had been convicted of money laundering for creating and maintaining accounts for the late dictator Ferdinand Marcos was able to hold 8 million francs in a joint account before it closed in 2006.

Helen Rivilla, with husband Antonio, had a personal account with Credit Suisse from 2000 to 2004 worth 8.113 million francs, and another personal account from 2000 to 2006 that held 179, 776 francs. Together, the two accounts are worth P462.9 million in today’s exchange rate, according to the database of the Organized Crime and Reporting Project (OCCRP).

The largest leak from a major Swiss bank, the Credit Suisse leak “points to widespread failures of due diligence by Credit Suisse, despite repeated pledges over decades to weed out dubious clients and illicit funds,” said The Guardian in its report published Sunday, February 20. The Guardian was part of the consortium which reported on the massive leak.

The Rivilla couple’s accounts raised red flags because Helen has been convicted of money laundering in the United States for being a middleman to the late dictator Ferdinand Marcos, whose $658 million worth of wealth has been declared as ill-gotten by the Philippine Supreme Court in 2003.

Marcos’ only son Ferdinand Jr. aka “Bongbong” is the frontrunner in the pivotal Philippine elections in May. Bongbong has refused to acknowledge nor apologize for his father’s corruption. As executor of the late dictator’s estate, he has been trying to contest assets and properties that had been recovered by the Philippine government to distribute to the Filipino people. For his compromise agreement with the Philippine government in 1993, Bongbong was held in contempt of US court, an order worth $353 million that he continues to evade to date, and is effective until January 25, 2031.

Helen Rivilla pleaded guilty to money laundering charges involving $3 million before a Hawaii court in 1992. According to a report by the Associated Press, Rivilla “admitted structuring bank transactions to avoid federal reporting laws while working for Marcos in Hawaii from 1986 to 1988.”

“In her plea, Rivilla said that on Marcos’ instruction, she opened bank accounts in her name, then deposited and withdrew money at Marcos’ bidding. She said Marcos told her to make each transaction for less than $10,000 to avoid having to report them to the federal government,” said the AP report published in 1992, which is about the same timeline of the Marcos’ trial in the United States.

Former Presidential Commission on Good Government (PCGG) commissioner Ruben Carranza said “Helen Rivilla is more than just the Marcos money-launderer in the US and a Credit Suisse client.”

Rivilla, according to news accounts, was a very close associate to the late dictator that she managed the most personal affairs.

In 1993, Rivilla met with an Australian model who claims that her baby was Marcos’ child and was asking to have a cut of the estate, the Sydney Morning Herald reported in 2004.

Vera Files reported in 2011 that the PCGG was also going to look into ill-gotten wealth that may be held by the model by the name of Evelin Hegyesi.

The Azio Foundation, according to Supreme Court records, is among the Swiss entities that held for Marcos his ill-gotten wealth.

Carranza said Rivilla was in the US court when Marcos wouldn’t answer why he signed as William Saunders when he opened a Credit Suisse account. Imelda Marcos was caught to have been using the alias Jane Ryan when opening and maintaining Swiss accounts.

It was over these Swiss foundations that the anti-graft court Sandiganbayan convicted Imelda of seven counts of graft in 2018. Sandiganbayan records show that Ferdinand Jr aka Bongbong, his sisters Imee and Irene, were named beneficiaries of these foundations.

In the 90s, the Marcoses were on trial in the US over assets placed in the country, and where human rights victims filed a petition for damages, seeking to source the payment from their US assets.

Marcos’ source of wealth was under scrutiny when he ran for vice president in 2016, because he spent all his adult life as a public official. His Statements of Assets, Liabilities, and Net Worth (SALNs) from 2008 to 2013 showed a steady increase in wealth even if his declared businesses went in the red. In previous interviews, Marcos said he is willing to publicly release his SALN but he wouldn’t make it mandatory for public officials.

Data culled over the years by the Rappler team and a later consortium of fact-checkers show the extent of fake news perpetrated to burnish the Marcos image, so that many of their supporters do not believe there was corruption during the dictatorship. According to Tsek.PH, in the campaign season, fake news has benefited Marcos the most.

The Rivilla couple could not be reached by The Guardian for comment.

“It is hard to know how Credit Suisse could have missed the money-laundering case linking the couple to the corrupt Philippine leader, which was reported by the Associated Press,” said The Guardian.

Rappler reached out to Marcos’ spokesperson Vic Rodriguez and campaign manager Benhur Abalos for comment, but we have yet to get a response. We will update this story once we do. 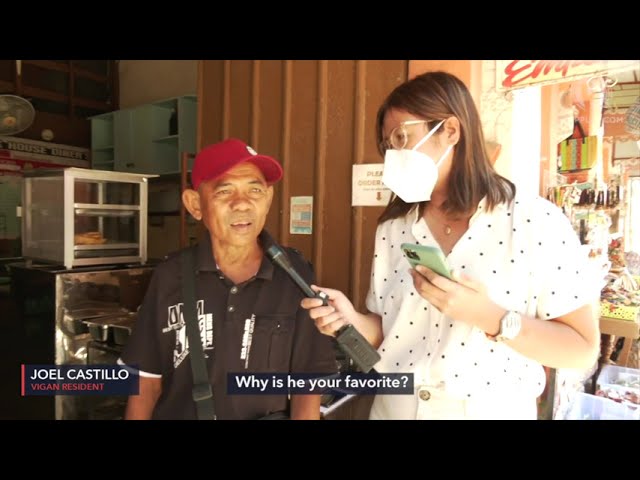