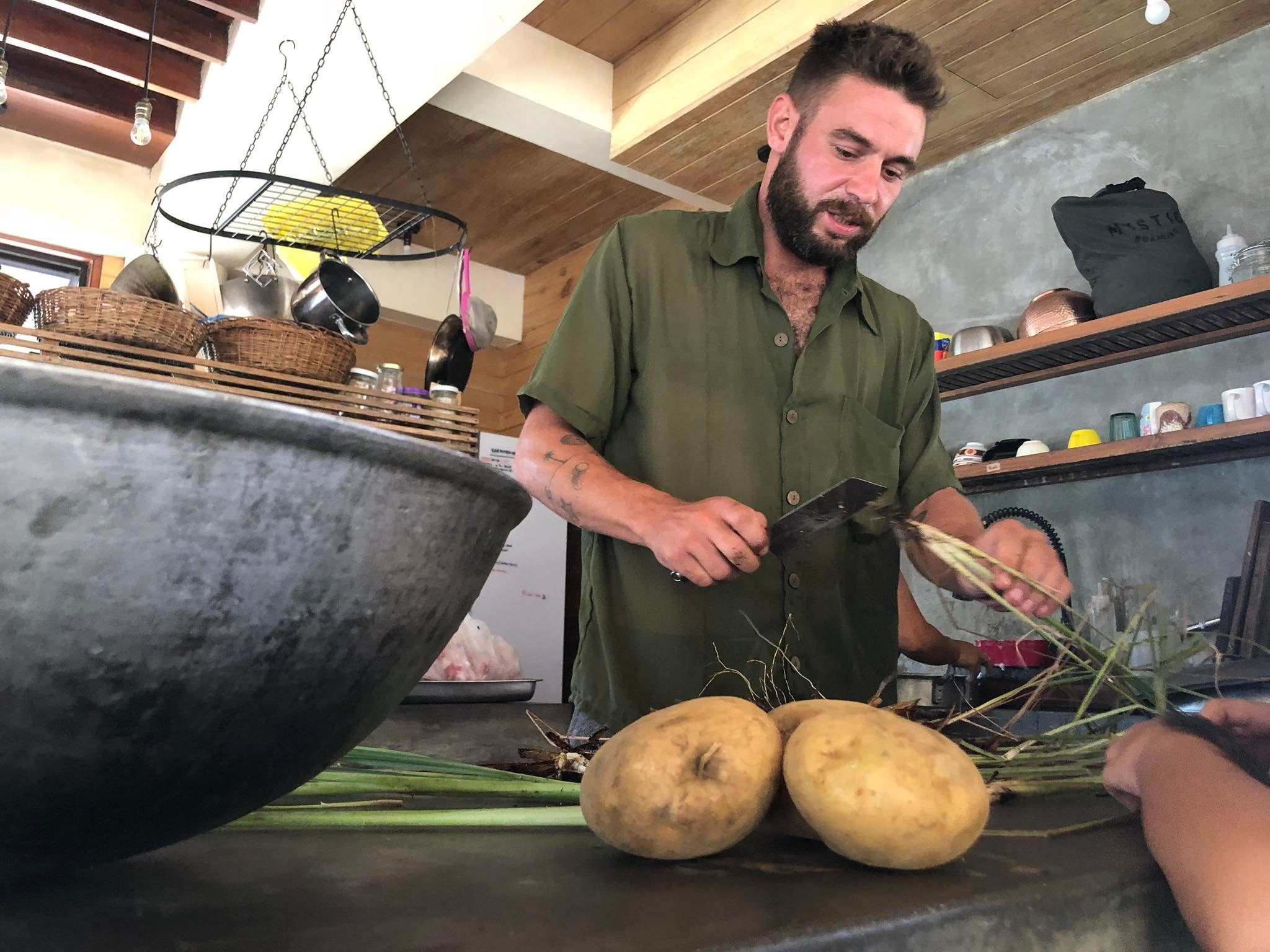 GOOD SAMARITAN. Swiss chef Ivo Zwicker prepares some vegetables for meals he is about to cook in a community kitchen in Siargao Island.

Facebook Twitter Copy URL
Copied
Ivo Zwicker, who lost his restaurant during the onslaught of Typhoon Odette in Siargao, thought of leaving the Philippines but has a change of heart

SURIGAO DEL NORTE, Philippines – Swiss chef Ivo Zwicker lost the restaurant he built on Siargao Island the day Typhoon Odette (Rai) unleashed its fury on Surigao del Norte in December 2021. Despite the misfortune, he returned to help the people of the island that he has come to love.

Zwicker, a 33-year-old chef from Switzerland, lost his restaurant, Kung Fu Ganda, along Tourism Road in the town of General Luna. The restaurant and everything in it were destroyed during the first December 16 landfall of Odette.

He thought of leaving the country but had a change of heart. He returned to Siargao from Manila and, together with his friends and other good Samaritans, organized and established a community kitchen on the typhoon-ravaged island that has been world-famous as the Philippines’ surfing capital.

For weeks now, Zwicker has been cooking meals at Vedya, a restaurant that withstood Odette’s fury. It has since been turned into a community kitchen where a few hundred meals are produced daily for needy communities.

Five days after the devastation, Zwicker flew to Manila. His plan then was to go back to Switzerland.

“But I felt so sad for the people there. My conscience didn’t allow me to abandon the place that I have come to love,” he said.

After a few days in Manila, Zwicker returned to Siargao with a passion to help and see what he could do to make things easier for the islanders.

He said he did what he knew best – “to cook,” but, this time, not for profit but for the hungry and needy.

Zwicker first came to the island in September 2019. Seeing its potential as a major tourism destination, he decided to settle there and build his restaurant.

What he did not foresee was the global COVID-19 pandemic which hit a few months later.

“For more than a year, it’s all disaster. First, COVID-19 struck, and then the super typhoon knocked us down. But it did not rid us of our passion,” Zwicker told Rappler.

Vedya, the community kitchen where Zwicker now cooks, has been known for its sumptuous vegetarian meals. It still manages to produce healthy meals that now include meat.

Several other foreigners stayed to help.

A freelance journalist from China, for instance, was vacationing on Siargao Island in December. She ended up staying and volunteering to help at Vedya.

“We are delivering food to different communities,” 28-year-old Wendy Lin told Rappler when asked how she was helping the community. “It’s truly amazing to see people helping one another.”

But that’s not all. Lin, who saw the island get pummelled by Odette, helped in single-handedly raising P1.4 million in donations from her friends for the relief efforts.

Lin said half a million pesos was spent on canned goods, and the rest on medicine, bottled water, solar lights, and construction materials.

Filipino-German Erik Reinnermann, who has been helping in relief and rehabilitation efforts on Siargao Island, was all praises for the volunteers at the Vedya community kitchen. “They keep the fire burning in the kitchen, producing food for hungry stomachs,” he said.

Joselito Saavedra, barangay chairman of Catangnan in General Luna, said he was very thankful to all those who have been helping people in his village and other islanders.

“Our people were able to receive their food. They are heroes in these troubled times,” Saavedra said. – Rappler.com