US donates P200M worth of aerial device to PH military ANOTHER DONATION. Manila's Defense Secretary Delfin Lorenzana receives P20 million-worth of donation from the US on October 13, 2021.

The United States donated on Wednesday, October 13, P200-million ($4 million) worth of aerial military devices to the country as part of the its commitment to beef up the Armed Forces of the Philippines (AFP).

In a ceremony on Wednesday at Clark Air Base, Mabalacat, Pampanga, the US turned over four ScanEagle Unmanned Aerial Systems to the Philippine Air Force (PAF). According to the AFP, the donated equipment would boost the aerial capabilities of the PAF.

“These platforms will provide additional capabilities in unmanned Intelligence, Surveillance, Reconnaissance and in support of counterterrorism, humanitarian assistance and disaster relief efforts,” the Philippine military said in a statement Thursday, October 14. 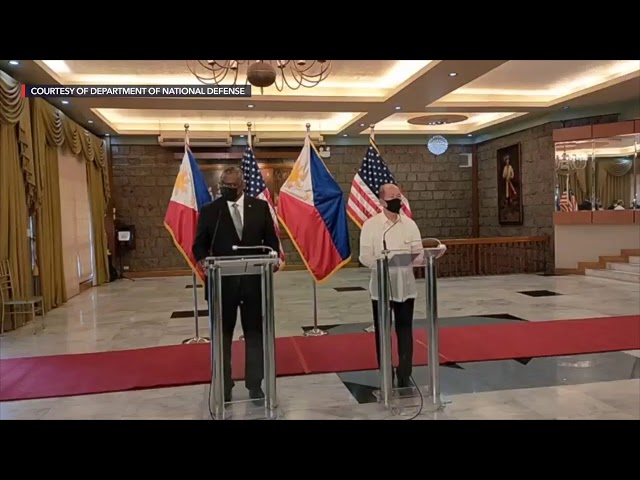 “We remain committed to our promises on helping modernize the Armed Forces of the Philippines, and we hope this will further strengthen our combined capabilities in working together towards a free and open Indo-Pacific,” Variava said during the ceremony, as quoted by the AFP.

Since Lorenzana revived his calls to review the Mutual Defense Treaty (MDT), which includes acquisition of more advanced weapons from its long-time ally, the US has donated more military assets to the Philippines. The MDT is the agreement that binds the military and defense cooperation between the Philippines and the US. Last July, the AFP received P48.5 million-worth of equipment from the US. According to the US Embassy in Manila, the Philippines remains the largest recipient of military assistance from the US in the entire Indo-Pacific region.

From 2015 to present, the country already received P50.6-billion worth of military aid. – Rappler.com