DETAINED. Senator Leila de Lima has been detained for five years due to drug charges filed by the government.

Facebook Twitter Copy URL
Copied
'That she has lost five years in jail due to these spurious charges is a travesty,' says several Democratic and Republican senators 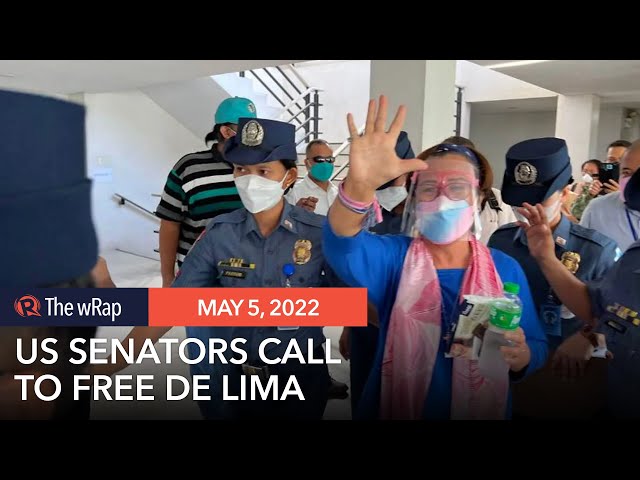 On Wednesday, May 4, (Manila time), Democratic Senators Edward Markey, Dick Durbin, Chris Coons, and Patrick Leahy, along with Republican Senators Marco Rubio and Marsha Blackburn, said “bogus charges” against the Philippine senator “were, as we suspected all along, politically-motivated and based on false information.”

The US politicians issued the statement following major developments in De Lima’s case, including the retraction of testimonies made by  former corrections chief Rafael Ragos, the Philippine Department of Justice’s star witness.

“The recent recanting by key witnesses of allegations made against Senator Leila de Lima warrant her immediate release,” said the senators.

De Lima, jailed during her first year as a sitting senator, has been in prison for five years over conspiracy to commit drug trading charges, which she claims, are fabricated cases masterminded by President Rodrigo Duterte as revenge for her investigation into extrajudicial killings.

She has so far been acquitted in one of the three cases filed against her, though US lawmakers, including Durbin, Leahy, and Markey, earlier said in February 2021, that this wasn’t enough and that De Lima should see “full exoneration.” “That she has lost five years in jail due to these spurious charges is a travesty. She should be released immediately and any remaining charges should be dropped without further delay,” the senators said on Wednesday.

US lawmakers who reignited their calls for De Lima’s freedom passed a resolution in 2020 that sought Magnitsky sanctions against Philippine officials linked to the detention of De Lima and to alleged extrajudicial killings under the Duterte administration.

In 2019, the US Senate appropriations committee also passed an amendment to the 2020 budget that includes a provision denying entry to those involved in De Lima’s detention.

Action taken by US lawmakers to sanction Philippine officials linked to human rights violations under the Duterte administration prompted President Rodrigo Duterte to bar the entry of Markey, Durbin, and Leahy to the Philippines.

Rather than issuing threats, US senators urged a “quick and credible trial” or De Lima’s release. At the time, Durbin said De Lima’s case would be an “important test” of democracy in the Philippines. – Rappler.com