KEY WITNESS. Former BuCor officer-in-charge Rafael Ragos testifies on September 20, 2016 before the HOR committee on justice doing an inquiry into the drug trade at the New Bilibid Prison. 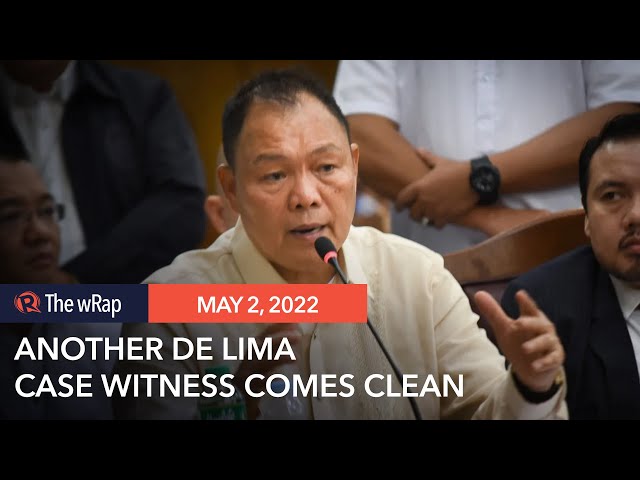 This is a huge development for De Lima as unlike alleged drug lord Kerwin Espinosa who also retracted last week, Ragos is a witness on record for the prosecution, and whose testimony was a big part of the reason the judge in Muntinlupa proceeded with trial.

“I now hereby declare and make known to the whole world that there is no truth whatsoever to any of these affidavits or House and court testimonies, or any other statement made in the media or other investigative proceedings, including the Senate and the Department of Justice (DOJ), on the delivery of monies to Secretary De Lima or Ronnie Dayan in whatever amount,” Ragos said in a sworn affidavit dated April 30.

Ragos was the acting chief of the Bureau of Corrections (BuCor) in 2012, and until this affidavit, his story was that he delivered money on two occasions to De Lima’s home as instructed by a convict. It’s part of the grand narrative that De Lima enabled the drug trade to thrive inside the New Bilibid Prison (NBP), and she allegedly collected kickback to fund her senatorial bid in 2016.

Ragos was initially charged alongside De Lima, but in 2017, the DOJ dropped him from the case and turned him into a witness. His testimony, combined with that of his sidekick-turned-foe Jun Ablen, was given a lot of weight by the Muntinlupa Regional Trial Court (RTC) Branch 205 when it decided in 2021 to continue trial.

Justice Secretary Menardo Guevarra told reporters: “All these happened before I became Secretary of Justice. Allow me to discuss these matters with the prosecutors concerned.”

Ragos took the witness stand in Muntinlupa and like what he said there in 2019, his affidavit again accuses Ablen as “the one engaged in illegal drug trading at the Bilibid.”

Ragos said “personalities who harassed me include Usec. Mecate who persistently pressured me to further implicate and manufacture lies against Senator De Lima, and [NBI] Deputy Directors Rachel Angeles and Vicente De Guzman who made my life difficult during my detention,” said Ragos.

“Mecate” refers to Aguirre’s former undersecrertary Raymund Mecate, who was one of the officials whom Justice Secretary Guevarra asked to resign when he took over the department in 2018.

Ragos, who faced De Lima in court and swore he was telling the truth, now tells the senator: “I beg the forgiveness of these innocent persons who suffered from my transgression of bearing false witness against them. I hope they find it in their heart to do so, knowing that I was only forced to transgress against them to save my own life. May God help me.”

Espinosa first executed an affidavit retracting similar accusations against De Lima, but there was a legal complication as to how much it could affect the senator’s cases because Espinosa is neither a respondent nor a witness in any of the cases.

Ragos, on the other hand, is at the heart of the current charges. His retraction would give De Lima’s defense lawyers much leeway to argue before the courts that the case needs to be dropped because retraction by one of the star witnesses is sufficient to establish reasonable doubt.

De Lima’s spokesperson lawyer Dino De Leon said that “most definitely, we shall formally inform the courts about these latest developments.”

De Lima was originally charged with three counts of conspiracy to engage in the drug trade, but she was acquitted of one count in 2021, and the two remain on trial.

De Lima earlier called on the other convicts to follow Espinosa’s cue and retract their statements.

De Lima has been in jail for five years, and is mounting her 2022 senatorial campaign from Camp Crame.