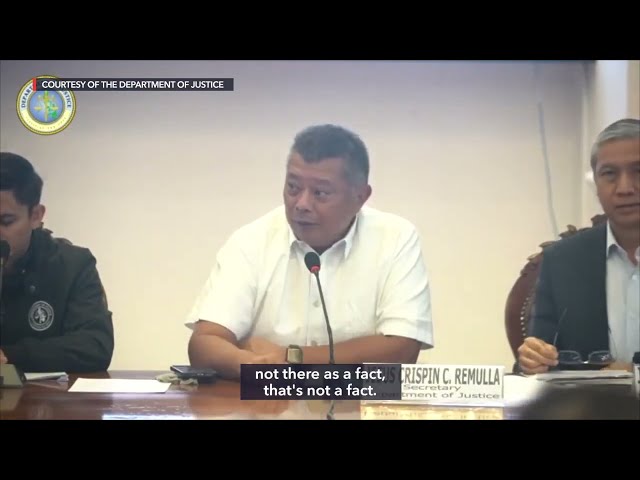 Facebook Twitter Copy URL
Copied
'Wala naman tayong sinasanto eh, kahit sino pa yan,' says Remulla, but adds, 'That's too biased for us to even consider a statement like that'

MANILA, Philippines – Justice Secretary Jesus Crispin “Boying” Remulla said there will be no sacred cows in his department’s drug war review, but was defensive when asked categorically if the probe will include former president Rodrigo Duterte.

Remulla held a press conference on Wednesday, August 3, to reiterate efforts of the Department of Justice (DOJ) to investigate abuses in the war on drugs. This domestic effort, he says, removes the jurisdiction of the International Criminal Court (ICC).

Rappler asked: “Some ICC experts say it’s not only looking at whether the justice system is working, but if our justice system is looking at the same individuals or the same conduct. And this was tweeted too by Senator [Leila] de Lima: Are you prepared to ask whether any of the killings were ordered by Duterte or any of his generals?”

“Are you asking a question or are you stating a fact? Because I don’t see a question coming from you,” Remulla replied.

Remulla then said, “Wala naman tayong sinasanto eh, kahit sino pa ‘yan (There are no sacred cows, whoever that is),” but added, “That’s too biased for us to even consider a statement like that.” – Rappler.com