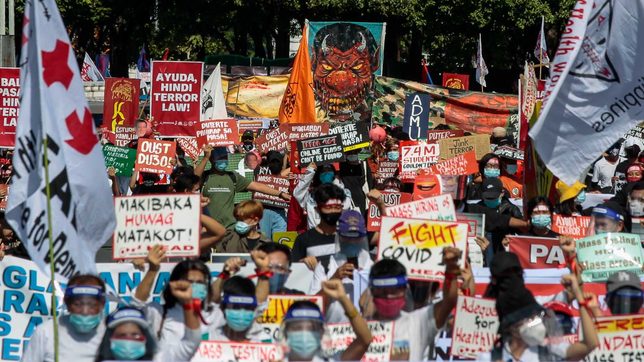 Rallies for democracy and press freedom hounded President Rodrigo Duterte’s 5th State of the Nation Address (SONA) on Monday, July 27, as protesters slammed the Anti-Terror Law and the shutdown of broadcast giant ABS-CBN.

Here is a compilation of Rappler videos from Monday’s protests.

From the energy of the SONA rally dubbed #SONAgKAISA on Monday, it seemed the tensions between the Left and Liberal Party-allied groups have evaporated. Groups converged at the University Avenue in the University of the Philippines – Diliman on Monday.

Among those who participated in the #SONAgKAISA rally was ABS-CBN journalist Ces Drilon, who lost her job after ABS-CBN shutdown.

Before the rally in UP Diliman, Manila police confiscated Anti-Terror Law protest materials from some Akbayan members who were attending Mass inside Quiapo Church.

A video showed at least two policemen walking confiscating the protest materials – which were not being used – from people who were seated at the back.

In the morning of July 27, ABS-CBN workers and supporters called to defend press freedom.

They mobilized in front of ABS-CBN and hold a very quick program before driving off in a motorcade for the protest convergence in UP Diliman.