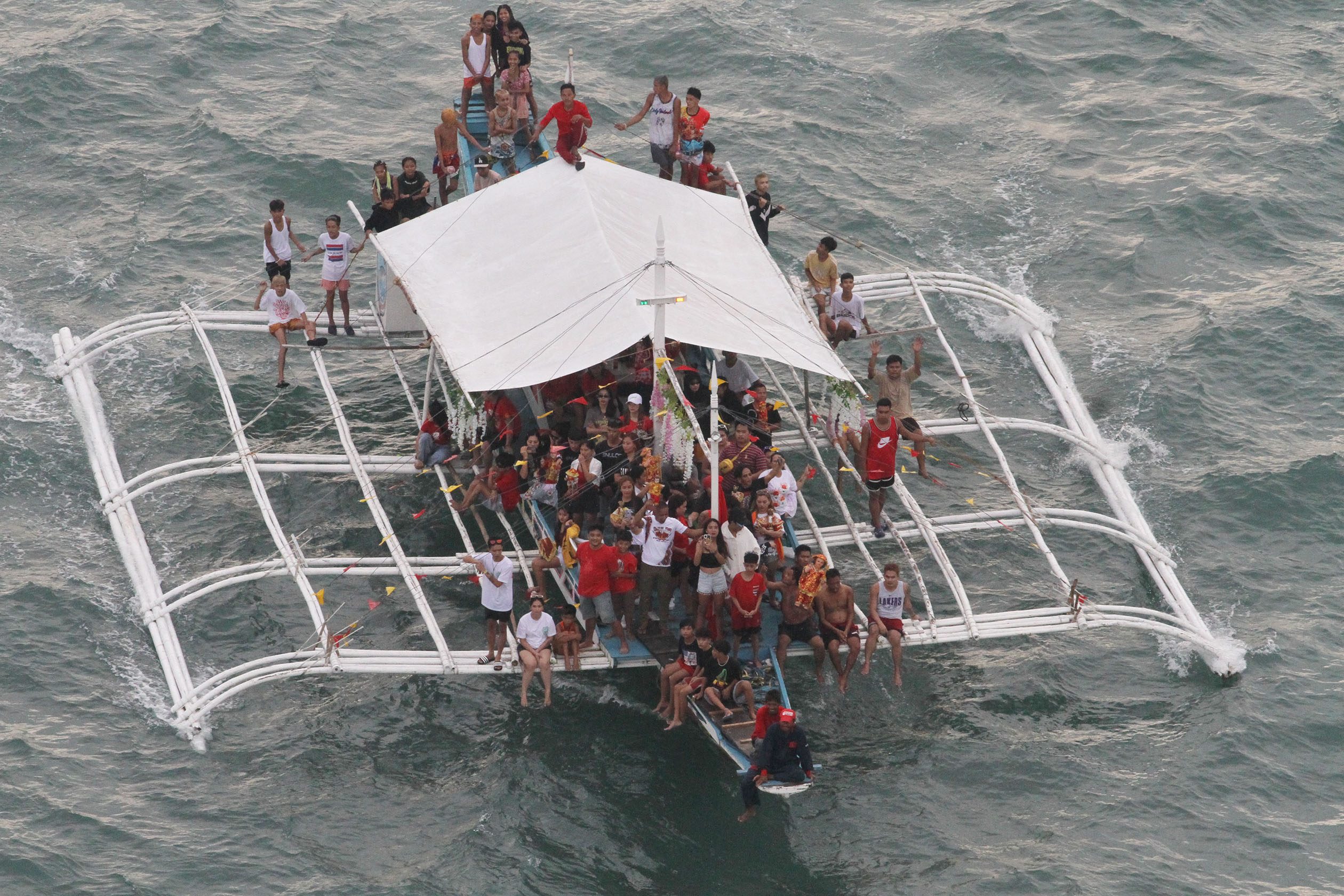 FESTIVAL. Hundreds of vessels and watercraft pass under the CCLEX bridge during the Fiesta Señor 2023 fluvial procession early morning on January 14, 2023.

CEBU, Philippines – On board the BRP BATAK (LC 299) navy vessel, Jude Thaddeus Aragon, 23, prayed to the Señor Santo Niño, the image of the Child Jesus. He prayed for his family’s welfare and future success during the fluvial procession held along the Mactan Channel on Saturday, January 14.

It was his first time joining the parade, which garnered around 700 devotees aboard 180 sea vessels and watercraft. The fluvial procession is one of the main highlights of the Sinulog and Fiesta Señor festivities. It was scuttled in the last two years due to the COVID-19 pandemic.

Leading the vessels was the Philippine Coast Guard ship BRP Cabra, which carried the image of the Child Jesus.

For this celebration, Aragon traveled all the way from Bogo City to the headquarters of the Naval Forces Central in Lapu-Lapu City – a 100-kilometer drive.

He recalled praying to the Santo Niño for new photography equipment and a studio that could help his career as a visual media professional.

Although alone on the trip, Aragon knew that the Santo Niño would listen to his prayers, especially when it came to seeking help for his family. “Lahi ra gyud ang feeling basta si Santo Niño na (The feeling is really different when it’s already the Santo Niño).“

Forty-five-year-old Cecille Cabrera, a high school teacher at the University of Cebu, had the same sentiment.

“It’s amazing if you really are a devotee of the Senior Santo Niño. The feeling is really different,” she said.

Cabrera said she had joined the fluvial parade several times over the years. When the pandemic restrictions became less strict, she finally had the opportunity to continue the tradition she follows.

The teacher was joined by her soldier husband Sherwin Cabrera during the celebration.

For John Bonafos, a retired officer of the Armed Forces of the Philippines (AFP), the weather in their province was in their favor, allowing them to hold the colorful celebration.

This is Bonafos’ fourth time joining the parade, and every time, he always came with his family. The retired lieutenant general and former commander of the AFP Central Command shared that his prayers are for his kababayan (countrymen) and for thanksgiving.

“Of course, I want to thank [Santo Niño] for all the blessings, not just for me but also for all of us here in Cebu.”

This year, Bonafos hopes that the Santo Niño will continue to “heal the world” – not just people who are struggling with illnesses but also the country and its problems.

Like many other devotees, Bonafos, Cabrera, and Aragon will join the 458th Fiesta Señor and Sinulog Festival that will be held at South Road Properties in Cebu City.

The event will begin on Sunday, January 15, with a Pontifical Mass to be presided by Cebu Archbishop Jose Palma at the Basílica Menor del Santo Niño de Cebú at around 5 in the morning. – Rappler.com