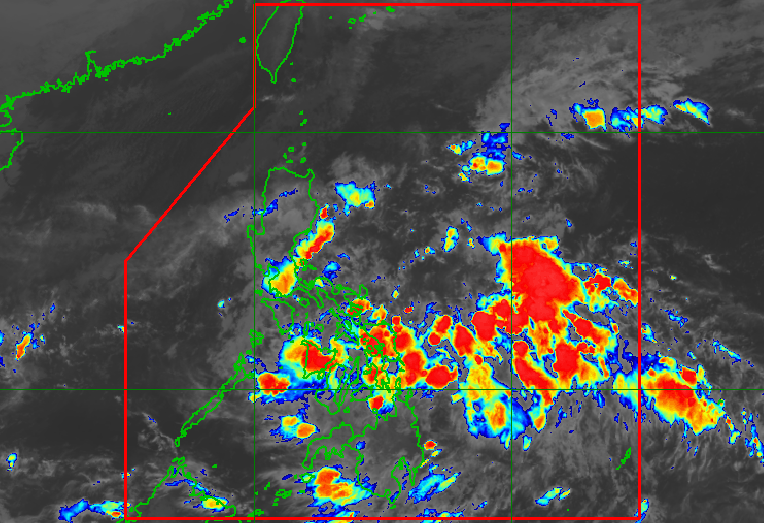 MANILA, Philippines – The trough or extension of a low pressure area (LPA) inside the Philippine Area of Responsibility (PAR) is bringing rain to much of the country on Friday, December 9.

The LPA was last spotted 610 kilometers east of Hinatuan, Surigao del Sur, said the Philippine Atmospheric, Geophysical, and Astronomical Services Administration (PAGASA) in its forecast issued at 4 am on Friday.

Its trough is causing scattered rain showers and thunderstorms in the following areas on Friday:

PAGASA Weather Specialist Benison Estareja said early Friday that the LPA is expected to move west northwest toward the Eastern Visayas-Bicol area in the next 24 hours.

He added that the LPA, as it moves offshore, may be closest to Caraga and Eastern Visayas on Friday; Northern Samar and Bicol on Saturday, December 10; Quezon and Aurora on Sunday, December 11; and Cagayan Valley on Monday, December 12.

The LPA is seen to start moving north on Sunday. By Monday, it could either recurve away from the Philippines or move east of Batanes, said Estareja.

The LPA may also develop into a tropical depression within 36 hours, or by Saturday at the latest. If it does, it would be given the local name Rosal.

Meanwhile, the shear line is affecting Northern Luzon. Scattered rain showers and thunderstorms are likely to persist in these areas on Friday:

PAGASA warned that flash floods and landslides are possible in areas affected by the trough of the LPA and the shear line.

As for Metro Manila, it is seeing localized thunderstorms on Friday.

PAGASA expects one or two tropical cyclones to enter or form within PAR in December. The Philippines has had 17 in 2022, so far. – Rappler.com