TROPICAL CYCLONES. Tropical Depression Agaton (Megi) inside the Philippine Area of Responsibility and Severe Tropical Storm Malakas outside PAR, as of April 11, 2022, 11 pm.

MANILA, Philippines – Rainfall warnings were still in place for parts of the Visayas late Monday evening, April 11, due to Tropical Depression Agaton (Megi).

The likelihood of Severe Tropical Storm Malakas entering the Philippine Area of Responsibility (PAR), meanwhile, has decreased, though its potential entry is not yet being ruled out.

Agaton was already in the vicinity of Santa Rita, Samar, slowly moving north northwest, the Philippine Atmospheric, Geophysical, and Astronomical Services Administration (PAGASA) said in a briefing past midnight on Tuesday, April 12.

The tropical depression continues to have maximum sustained winds of 45 kilometers per hour, while its gustiness slightly increased from 60 km/h to 70 km/h.

PAGASA warned that rain may persist until Tuesday evening, with most of the affected areas still in the Visayas and Bicol.

“Under these conditions and considering significant antecedent rainfall, scattered to widespread flooding and rain-induced landslides are still expected,” the weather bureau said. 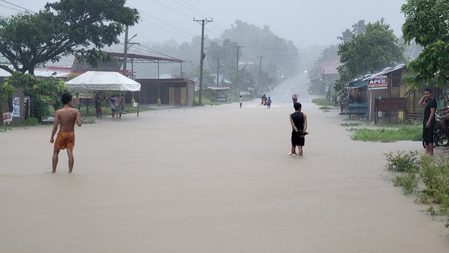 In terms of winds, these are the areas left under Signal No. 1 as of 11 pm on Monday:

Agaton made landfall twice, in these areas:

The weather bureau also said Agaton is likely to weaken into a remnant low within 36 hours, “due to the combined effects of land interaction, increasing vertical wind shear, and the effects of the upper-level outflow of Severe Tropical Storm Malakas.”

Whatever would be left of Agaton could head east over the Philippine Sea, or away from land, as it gets absorbed within Malakas’ circulation.

As for Malakas, it was last spotted 1,255 kilometers east of Southern Luzon late Monday evening, moving north northwest at 15 km/h. It is expected to maintain this direction for the next 12 hours.

PAGASA noted that there has been a slight eastward shift in Malakas’ track, which means the likelihood of it entering PAR has decreased.

Even if Malakas enters PAR, its stay would only be brief, and it could exit by Tuesday evening or Wednesday morning. Its local name would be Basyang.

As of late Monday evening, Malakas still had maximum sustained winds of 100 km/h and gustiness of up to 125 km/h. It is still likely to intensify into a typhoon, but PAGASA now expects this by Tuesday evening. Malakas is also projected to reach a peak intensity of 150 km/h by Wednesday evening.

Malakas will have no direct effect on weather in the Philippines, even if it briefly enters PAR. But the weather bureau warned that swells triggered by the severe tropical storm could cause moderate to rough seas in the northern and eastern seaboards of Luzon and the eastern seaboards of the Visayas and Mindanao. Such conditions could be risky for small vessels.

Sea travel remains dangerous on Tuesday due to Agaton.