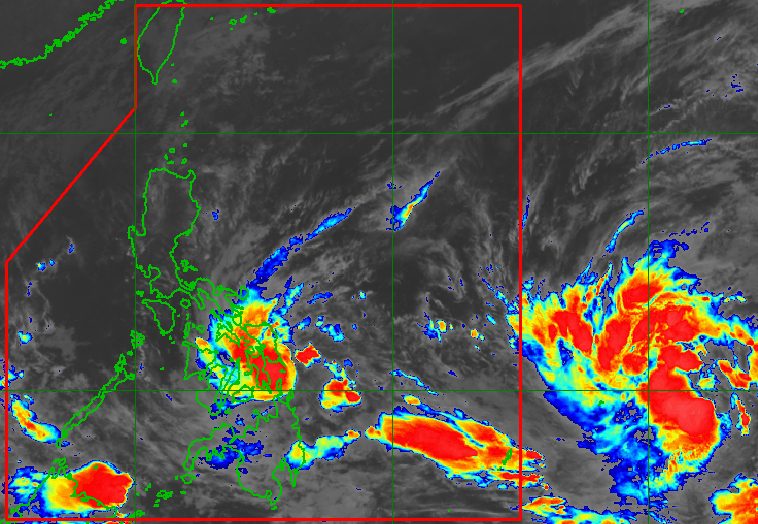 TROPICAL CYCLONES. Tropical Depression Agaton inside the Philippine Area of Responsibility and Tropical Storm Malakas outside PAR, as of April 9, 2022, 11 pm.

The tropical depression is likely to stay almost stationary until Monday, April 11, but the possibility of landfall in Eastern Samar is not being ruled out.

Agaton maintained its strength late Saturday evening, with maximum sustained winds of 55 kilometers per hour and gustiness of up to 70 km/h. But it is still seen to intensify into a tropical storm within the next 12 to 24 hours.

PAGASA warned that scattered to widespread floods and landslides are expected in areas affected by Agaton. The weather bureau updated its rainfall forecast as of 11 pm on Saturday:

Signal No. 1 is still raised in four areas as of 11 pm on Saturday. These areas are experiencing strong winds which pose “minimal to minor threat to life and property”:

Agaton could begin turning northeast on Monday evening or on Tuesday morning, April 12, as it interacts with the incoming Tropical Storm Malakas, which remains outside the Philippine Area of Responsibility (PAR).

Malakas, located 1,815 kilometers east of Mindanao late Saturday evening, is moving northwest at 20 km/h. It could enter PAR late Monday or early Tuesday and would be given the local name Basyang.

As of late Saturday evening, Malakas still had maximum sustained winds of 75 km/h and gustiness of up to 90 km/h. But it is expected to strengthen into a severe tropical storm on Sunday, April 10, and then into a typhoon on Sunday evening or Monday morning. It could reach a peak intensity of 155 km/h on Tuesday.

Its stay inside PAR is likely to be short. PAGASA expects Malakas or Basyang to leave PAR late Tuesday or early Wednesday, April 13, which means it would only be in the region for around a day.

This brief stay also means Malakas will not directly affect the weather in the Philippines. But PAGASA said it may “influence the movement and development” of Agaton.

Agaton could weaken into a remnant low by late Tuesday as it gets absorbed by Malakas or Basyang.

Meanwhile, PAGASA reminded the public that sea travel is still risky due to Agaton and the northeasterly surface windflow.

PAGASA Weather Specialist Benison Estareja said the LPA only has a slim chance of developing into a tropical depression, but it is bringing rain to Palawan. – Rappler.com