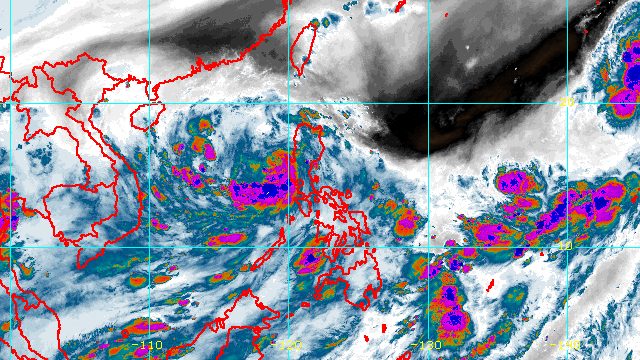 Facebook Twitter Copy URL
Copied
Rain from Typhoon Karding (Noru) is expected to persist until noon on Monday, September 26. Signal Nos. 1, 2, and 3 also remain in effect as of 5 am.

It then crossed Nueva Ecija, Tarlac, and Zambales.

By 4 am on Monday, Karding was already over the coastal waters of Santa Cruz, Zambales, the Philippine Atmospheric, Geophysical, and Astronomical Services Administration (PAGASA) said in its 5 am bulletin.

The typhoon was moving west northwest at 30 kilometers per hour, faster than its previous speed of 20 km/h. It will keep moving over the West Philippine Sea toward Vietnam, with its exit from the Philippine Area of Responsibility (PAR) expected on Monday evening.

Rain from the typhoon is expected to persist until noon on Monday. PAGASA warned that there may still be scattered to widespread floods and landslides.

The southwest monsoon or hanging habagat will also affect the western parts of Central Luzon; Southern Luzon, including Metro Manila; and the Visayas on Monday.

Meanwhile, Signal Nos. 1, 2, and 3 remain in effect, but PAGASA said “rapid de-escalation of wind signals remains likely as Karding moves further away from the landmass of Luzon.” PAGASA is no longer warning of storm surges, but it said that high waves breaking along the coast of Zambales, Bataan, and Pangasinan may cause floods in “exposed and low-lying coastal communities.”

A new gale warning was issued at 5 am on Monday, covering the western seaboards of Northern Luzon and Central Luzon, particularly Ilocos Sur, La Union, Pangasinan, Zambales, and Bataan. Seas are rough to very rough, with waves 2.8 to 4.5 meters high. PAGASA advised fishing boats not to sail and larger vessels to watch out for big waves.

The enhanced southwest monsoon may also cause moderate to rough seas in the western seaboards of Southern Luzon, the Visayas, and Mindanao. Waves could be 1.5 to 3 meters high, which may be risky for small vessels.