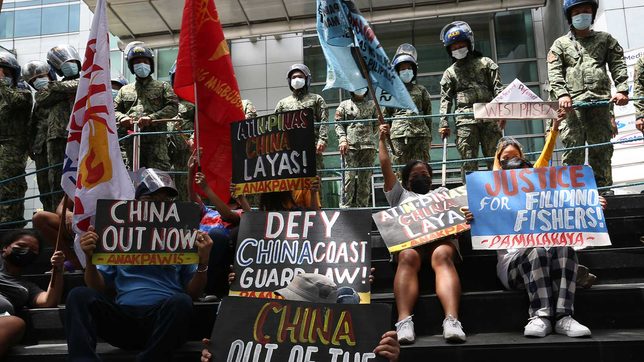 PH VICTORY. Various groups troop outside the Chinese consulate in Makati City on July 12, 2021 to mark the fifth anniversary of the Philippines' victory over China at the Permanent Court of Arbitration on the West Philippine Sea.

Countries across the world celebrated the Philippines’ 2016 arbitral award on Monday, July 12, the fifth anniversary of the landmark legal victory that affirmed Filipinos’ rights in the West Philippine Sea.

Widespread public support comes after years of the Philippines downplaying its own award until finally renewing its explicit commitment to the ruling in 2020 – when the Department of Foreign Affairs said the award was “non-negotiable” and called on China to abide by it.

The Hague ruling, which the Philippines won against Beijing, declared there was no legal basis for China’s expansive claims in the South China Sea, a vital International trade route.

“History is what we make happen,” German ambassador to the Philippines Anke Reiffenstuel said, recalling the historic decision of the Philippines to file its case against China at the Permanent Court of Arbitration in 2013.

Reiffenstuel said the rules-based order laid down the United Nations Convention on the Law of the Sea (UNCLOS), which ensured international cooperation and stability.

On Monday morning in Manila, United States Secretary of State Antony Blinken commemorated the award, saying the Philippines’ actions “scored an important victory” for the rule of law in the South China Sea. Blinken reminded the Philippines and China that based on their treaty obligations, both states “are legally bound to comply with this decision.”

In a separate statement from the US Department, Blinken took the occasion to reaffirm the scope of Washington’s Mutual Defense Treaty with the Philippines, saying any armed attack on Philippine forces, public vessels, or aircraft in the South China Sea wold invoke the defense pact of the two countries.

Blinken also reiterated the US’ updated policy on the South China Sea which branded many of China’s actions in the waterway as “unlawful.” He hit China’s continued coercion and intimidation of Southeast Asian states and its threat to freedom of navigation in the South China Sea.

The US called on China to stop its “provocative behavior” and “take steps to reassure the international community that it is committed to the rules-based maritime order that respects the rights of all countries, big and small.”

The European Union (EU) also celebrated the ruling, citing its impact not only on the Philippines, but also on the rest of the International community. “What happens in the South China Sea matters to the EU, ASEAN (Association of Southeast Asian Nations), and the whole world,” it said.

The statement was echoed by France and Denmark.

Japan also marked the fifth anniversary of the award by reiterating its “serious concern” and objection to claims in the South China Sea that were inconsistent with UNCLOS. Like ASEAN states, Japan faced its own dispute with China in the East China Sea.

“The claim by China that it will not accept the award is against the principle of peaceful settlement of disputes in accordance with international law, in particular UNCLOS, and undermines the rule of law as a fundamental value of the international community,” it said.

Japan called on China to comply with the award and said it “highly appreciates” the Philippines renewed commitment to the award expressed by President Rodrigo Duterte’s speech at the United Nations 75th General Assembly last September 2020 and Foreign Secretary Teodoro Locsin Jr.’s latest statement celebrating the legacy of the ruling.

Canada, meanwhile, joined countries in calling on “all involved parties” to comply with the ruling. “This decision is a significant milestone and a useful basis for peacefully resolving disputes in the South China Sea,” it said.

Canada likewise reiterated its concern over China’s “escalatory and destabilizing actions” in both the East and South China Seas, including the recent swarming of ships in Philippine waters.

“Canada is committed to defending and revitalizing an effective rules-based international order, including for the oceans and seas, and to the peaceful resolution of disputes in accordance with international law,” it said.

Experts have often called on countries in both Southeast Asia and other parts of the world to support the Hague ruling, saying this was one way to enforce it and preserve international law in the disputed waters. Doing so would also put up a united front against China’s expansionist moves, they added.

In an earlier Rappler Talk interview, Paul Reichler, the Philippines’ lead counsel in its case against China, said international cooperation could also put pressure on China to comply with the ruling.

“How do you get a big and powerful state to comply with its obligations especially if you are a much smaller and much less powerful state? It has to be by joining forces with other states that have similar interests in encouraging China, in pressuring China, to comply with international law and to respect their sovereign rights,” Reichler said. – Rappler.com