Newsbreak Chats: The GCTA law, Cardema, Bikoy, and how laws can be twisted

Aug 29, 2019 4:16 PM PHT
Rappler.com
Facebook Twitter Copy URL
Copied
On Thursday, August 29, the Newsbreak team sits down to discuss and analyze how some political personalities have tried to trifle with the law 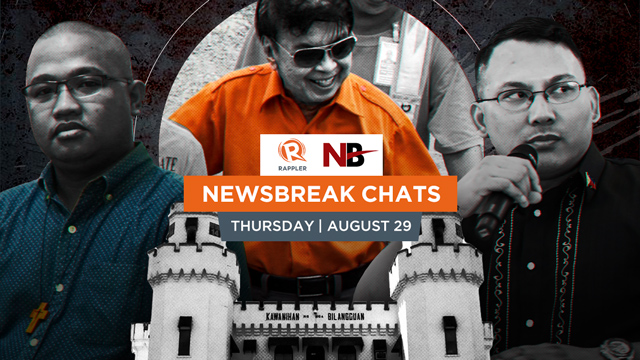 Bookmark this page to watch and join the discussion live on Thursday, August 29, at 4 pm!

MANILA, Philippines – Laws that were twisted or whose loopholes were abused in the past few months take center stage in Newsbreak Chat discussions on Thursday, August 29.

The Newsbreak team sits down to discuss and analyze the events that dominated the news cycle in the past month, including the inciting to sedition charge against the opposition, the long battle between Ronald Cardema and the Commission on Elections (Comelec), and the good conduct time allowance law.

August saw the filing of inciting to sedition charges against 36 people, including Vice President Leni Robredo, members of the opposition, and Catholic church figures, on the basis of an affidavit by Peter Joemel Advincula over the viral Bikoy videos. (READ: Bikoy vs Bikoy: The biggest flip-flops of the government’s star witness)

Former National Youth commissioner and frustrated politician Ronald Cardema still insists that he should be in the House of Representatives – to the disgust of Comelec Commissioner Rowena Guanzon whom he accused of bribery. (READ: Stretching the rules: Duterte Youth’s bid for Congress)

The month ends with controversy over the supposed early release of convicted murderer-rapist Antonio Sanchez. As the public backlash put a stop on this plan, the discussions now focus on whether or not there is a need to revisit good conduct time allowance law.

Are laws in the Philippines taken seriously or are they being twisted to suit a personal agenda? What safeguards should be undertaken? Watch the discussion on Thursday, August 29, at 4 pm! – Rappler.com