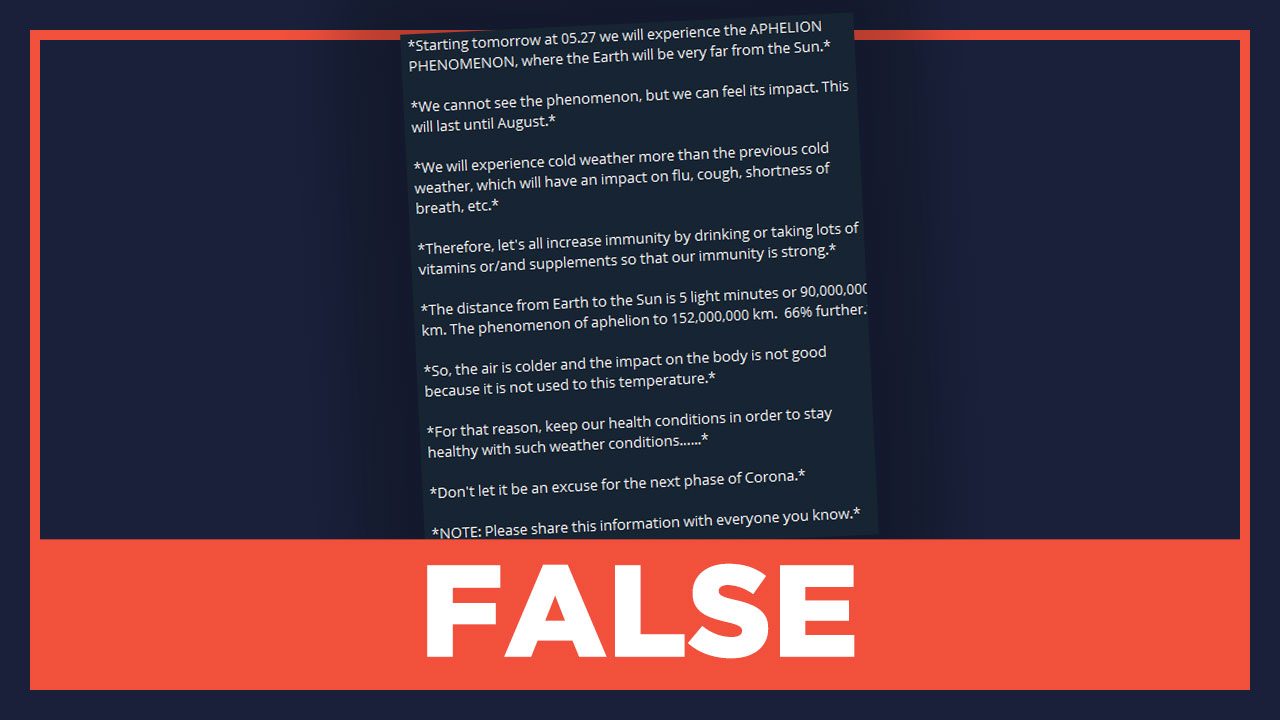 Facebook Twitter Copy URL
Copied
Indonesia’s weather agency, the California Academy of Sciences, and NASA say that the increase in distance between the Earth and the Sun during aphelion is not enough to affect Earth’s weather

A claim circulating on the internet says a cosmological event called “aphelion phenomenon” will cause cold weather that is colder than usual due to the increased distance between the Earth and the sun during the event.

The claim says that the aphelion phenomenon will increase the distance between the Earth and the Sun to 152 million kilometers compared to the average distance of Earth from the sun, which is only around 90 million km.

The claim says that this large increase in distance will cause colder weather, warning the public that the event will “have an impact on flu, cough, shortness of breath, etc.”

The claim was submitted to Rappler through email for checking.

According to the National Aeronautics and Space Administration (NASA), aphelion is the point in Earth’s orbit that is farthest from the sun. It is the result of Earth’s elliptical orbit, and the planet is at this point every June.

According to NASA astronomer George Lebo, the distance between the Earth and the sun during aphelion, in which the Earth is farthest from the sun, is 152 million km. Both CAS and NASA said that the 2-million-kilometer difference is not enough to make a difference in Earth’s weather. – Lorenz Pasion/Rappler.com

Keep us aware of suspicious Facebook pages, groups, accounts, websites, articles, or photos in your network by contacting us at factcheck@rappler.com. You may also report dubious claims to #FactsFirstPH tipline by messaging Rappler on Facebook or Newsbreak via Twitter direct message. Let us battle disinformation one Fact Check at a time.

FACT CHECK: There is no discovered cure for diabetes

There is no evidence that Vicks VapoRub treats acne