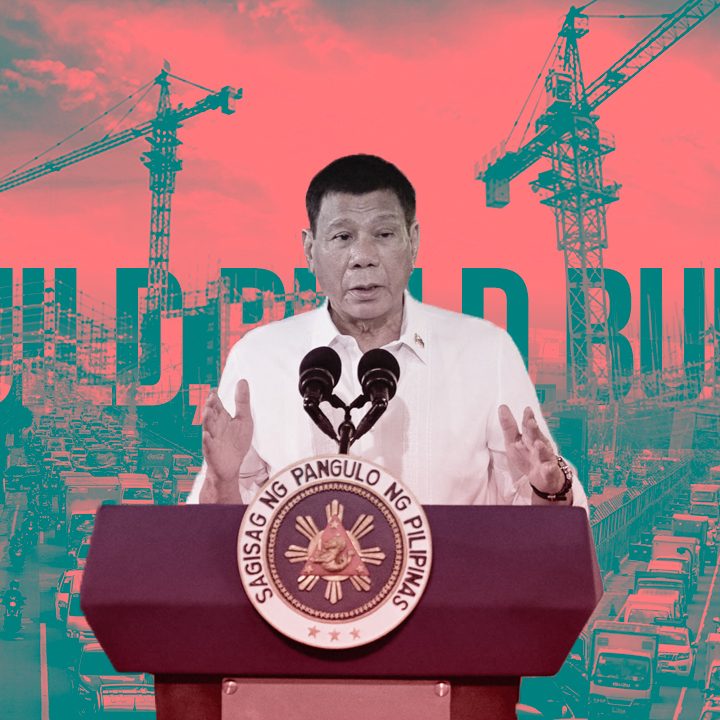 Rappler has since debunked this claim. The reduction in traffic in the nation’s capital is a result of the restrictions brought about by the pandemic, not new infrastructure.

Claims that new infrastructure will fix Manila’s traffic issues are not new.

In Metro Manila, the Department of Public Works and Highways (DPWH) has repeatedly boasted about how “Build, Build, Build” projects, such as Skyway Stage 3 and the BGC-Ortigas Bridge, will decongest Manila.

Herein, however, lies the inherent issue with “Build, Build, Build”: its current focus is on new roads and bridges. In 2021, only P60 billion will be spent by the Department of Transportation (DOTr) for the support of land- and rail-based public transportation nationwide, compared to the P149.9 billion allocated to the DPWH for the network development and bridge programs. The network development program includes road widening, construction of bypass roads, and building of flyovers, among others.

Building more space for cars does not improve traffic, thanks to a phenomenon called “induced demand.”

In an interview with Rappler, #MoveAsOne coalition co-convenor Robert Siy explained that when a new road or bridge is created, traffic will be temporarily reduced. Relatively light traffic, however, “attracts more people to use that very road or bridge. Very soon, [cars] fill up that space and you get back to the same congestion.”

An example of induced demand is the Interstate 10 (I-10), or Katy Freeway, in Texas. In 2004, an I-10 interchange was ranked as the second-worst traffic bottleneck in the United States. To counteract this, the Texas Department of Transportation spent $2.8 billion to widen it.

An Asian Development Bank study concluded that Metro Manila traffic could actually get worse than pre-pandemic levels due to people opting for private vehicles during the pandemic.

Further, Regin Regidor, the former director of the University of the Philippines National Center for Transportation Studies, explained to Rappler that Skyway Stage 3 would likely have minimal impact on traffic. Because of the roadway’s “prohibitively expensive” toll fees as high as P264 for Class 1 vehicles and P528 for Class 2, traffic induced here will likely be exclusive to private vehicles.

The solution is to get people out of private vehicles.

A November 2020 Social Weather Stations survey commissioned by the Department of Health found that 87% of Filipinos believed that roads would be better off if public transportation, bicycles, and pedestrians were given priority over private vehicles.

To the credit of the government, “Build, Build, Build” has invested in upgrading Manila’s rail infrastructure in projects such as the LRT-2 extension and Manila Subway.

Siy explained, however, that although these public transportation projects have “great potential,” it isn’t the most efficient way to solve Manila’s public transportation issues – rail is expensive and slow to build. The LRT-2 extension took six years to complete, while the Manila Subway Phase 1 is scheduled to be partially operational by 2022 and fully completed by 2025.

Siy and Regidor agreed that the government should invest in ground-based infrastructure in ways they had already begun doing. While the Metro Manila Bus Rapid Transit system had been awaiting construction and implementation for nearly a decade, Regidor pointed out that projects such as the EDSA Busway and creation of bike lanes had proven to be extremely cost-effective and fast to implement.

To compare, P4.5 billion was spent on extending the LRT-2 by two stations, and at least P355.6 billion will be spent on the Manila Subway. The DOTr, meanwhile, has spent only P1.5 billion on paying around 19,000 drivers and operators nationwide under the “Libreg Sikay” (Free Ride) program, of which the EDSA Busway was temporarily part of, and P1.1 billion to create permanent bike lanes in Metro Manila.

“To the credit also of the government, they’ve been able to [implement the EDSA Busway] with very meager spending. But now that we know that this is a good concept, we’ve demonstrated that buses can move as efficiently as trains. We need to invest in it,” said Siy.

For example, in 1973, a segment of the West Side Highway in Manhattan, New York, collapsed. The highway previously served 80,000 vehicles a day. Rather than these vehicles getting displaced, therefore increasing congestion in New York, a New York State Department of Transportation study found that 93% of the traffic that used to commute through the West Side Highway weren’t actually displaced. They simply vanished. The study indicated that these commuters who used to drive through the bridge instead used public transportation.

Other countries have implemented other non-infrastructure-related solutions to solve traffic. In Stockholm, Sweden, the city government implemented a congestion pricing scheme for vehicles entering the inner parts of Stockholm. Prices ranged from 20 SEK (P116.59) to 35 SEK (P204.02). Traffic in Stockholm was reduced by 20% and the money collected was then funneled back into Stockholm’s infrastructure.

With the amount of resources the Duterte administration has been willing to put into “Build, Build, Build” and new infrastructure, solving Manila’s traffic woes is an attainable goal. It requires, however, the political will to change the policy makers’ mindset from building more roads to developing public transportation. – Jose Atienza/Rappler.com