FALSE: ‘No proof’ that Marcos couple stole billions from Filipinos 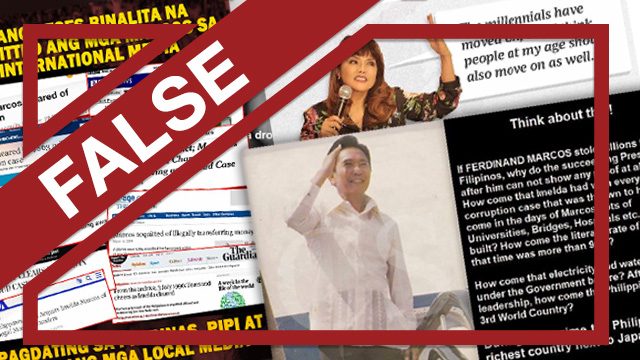 Facebook Twitter Copy URL
Copied
At least two court cases show that Ferdinand and Imelda Marcos have had ill-gotten wealth. In one of these, the Supreme Court forfeited the recovered Marcos assets in favor of the Philippine government.

Claim: A Facebook post on the page “Pinoy Rap Radio” questioned the allegations of corruption against former President Ferdinand Marcos. It claimed that succeeding administrations “could not show proof” of the money that Marcos stole from the Filipino people.

The graphic on the post, dated May 2014, starts a series of questions about Marcos and his wife Imelda with: “If Ferdinand Marcos stole billions from Filipinos, why do the succeeding presidents after him can not show any proof at all? How come Imelda won every corruption case that was thrown to her?”

The 4-year-old post has more than 331,000 shares, more than 38,000 comments, and more than 369,000 reactions as of this posting. It has been shared again publicly by some Facebook users in recent days.

Pinoy Rap Radio is the verified Facebook page of a Philippine-based online radio streaming station of the same name. Their “About” page says they were founded in 2012. Today, they have more than 8 million followers.

There are various versions of this claim in other posts in pro-Marcos groups and pages, like a post shared by the Forever Marcos page in August, and a post shared in the DUTERTE MARCOS SUPPORTERS Facebook group in October.

The facts: Imelda did not win every corruption case thrown at her. Apart from losing the recent criminal case at the anti-graft court Sandiganbayan, she lost in a number of local and overseas cases involving the loot she and her husband, the late dictator Ferdinand Marcos, amassed during their rule from 1965 to 1986.

For instance, on December 21, 1990, the Swiss Federal Supreme Court affirmed a prosecutor’s findings that the Marcoses hid $356 million in Swiss banks through dubious foundations during their two-decade rule. The money was then held in escrow by the Philippine National Bank in 1999.

In 2003, the Supreme Court allowed the forfeiture of the money – which by then had grown to over $658 million due to interests and other accrued amounts as of January 2002 – in favor of the Philippine government.

In 1993, Imelda Marcos was convicted of two counts of graft over anomalous contracts involving a lease between the Light Rail Transit Authority and the Philippine General Hospital Foundation. But the Supreme Court acquitted her in 1998.

In addition, since its inception in 1986 until 2015, the Presidential Commission on Good Governance (PCGG) recovered more than P170 billion (over $3 billion in current peso-dollar exchange rates) of the Marcoses’ ill-gotten wealth. (READ: At 30: PCGG by the numbers)

Their children Imee and Ferdinand “Bongbong” Jr were also named as beneficiaries of these foundations.

This was the last criminal case against the Marcoses with the Sandiganbayan, but there are still 23 civil forfeiture cases pending before the anti-graft court, with one of them nearing decision.

Asked about the claim that previous presidents were not able to pin down the Marcoses in a corruption case, lawyer and former Supreme Court spokesperson Theodore Te told Rappler: “I think the answer lies in the length of time the cases took. This [recent] case versus Imelda wasn’t won by a president, it started with previous presidents.”

Rappler previously analyzed data on long pending cases lodged with the Sandiganbayan. We noted that, with respect to this particular case, both government prosecutors and the Marcoses’ defense teams share the blame. Both camps took turns asking the Supreme Court to intervene at various points in the proceedings. (READ: What are the Sandiganbayan’s oldest pending cases?)

Transparency International estimates that the Marcoses embezzled $5 billion to $10 billion over the 20 years they were in power, citing CNN, Time Asia, and the United Nations Office on Drugs and Crime.

Rappler emailed Pinoy Rap Radio some questions about their post, but it has yet to respond as of posting time. – Vernise L. Tantuco and Michael Bueza/Rappler.com