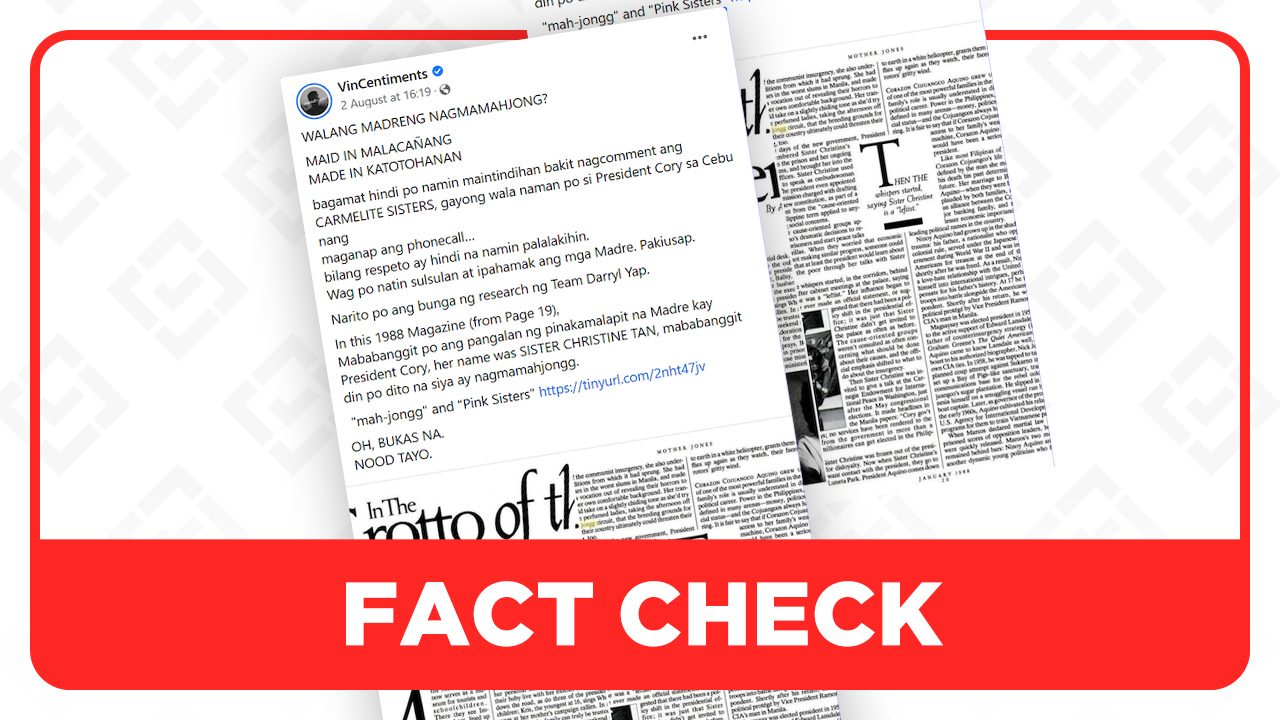 Facebook Twitter Copy URL
Copied
The article’s author Anne Nelson clarifies that she referred to some ladies whom Sister Christine Tan talked to as playing mahjong, not the nun herself

Why we fact-checked this: The claim was made in an August 2 post on the Facebook page “VinCentiments” by writer and director Darryl Yap and cinematographer Vincent Asis. Yap directed the movie, Maid in Malacañang, released on August 3. It supposedly shows the Marcos family’s final 72 hours in Malacañang from their own perspective.

The post claimed that according to Nelson’s story, Sister Christine Tan was playing mahjong: “In this 1988 Magazine (from Page 19), Mababanggit po ang pangalan ng pinakamalapit na Madre kay President Cory, her name was SISTER CHRISTINE TAN, mababanggit din po dito na siya ay nagmamahjongg.” (The name of the nun closest to President Cory was mentioned, her name was Sister Christine Tan, it is also mentioned here that she plays mahjong.) As of writing, the post had about 7,700 reactions, 1,900 comments, and 1,200 shares.

The bottom line: The dispute over who was referred to as playing mahjong in Nelson’s article revolves around this sentence: “Her [Sister Christine Tan’s] tranquil voice would take on a slightly chiding tone as she’d try to convince the perfumed ladies, taking the afternoon off from the mah-jong circuit, that the breeding grounds for such misery in their country ultimately could threaten their own well-being, too.”

Nelson herself clarified in an August 4 Twitter post that there was no mention in the article of Sister Christine, or of Cory Aquino, playing mahjong. Instead, she said that it was some of the ladies, whom Sister Christine talked to, who played mahjong.

The correction was in reference to a previous tweet where she used the name “Christine Yap” instead of “Christine Tan.” Also, in both the current and previous tweets, she inadvertently stated 1989 as the publication year of her article instead of 1988.

The backstory: One scene in Yap’s Maid in Malacañang depicted Carmelite nuns as playing mahjong with Cory Aquino during the EDSA Revolution. The Cebu Carmelite sisters objected to the depiction, which they described as “malicious.” – Percival Bueser/Rappler.com

Neri Colmenares is not the new health secretary