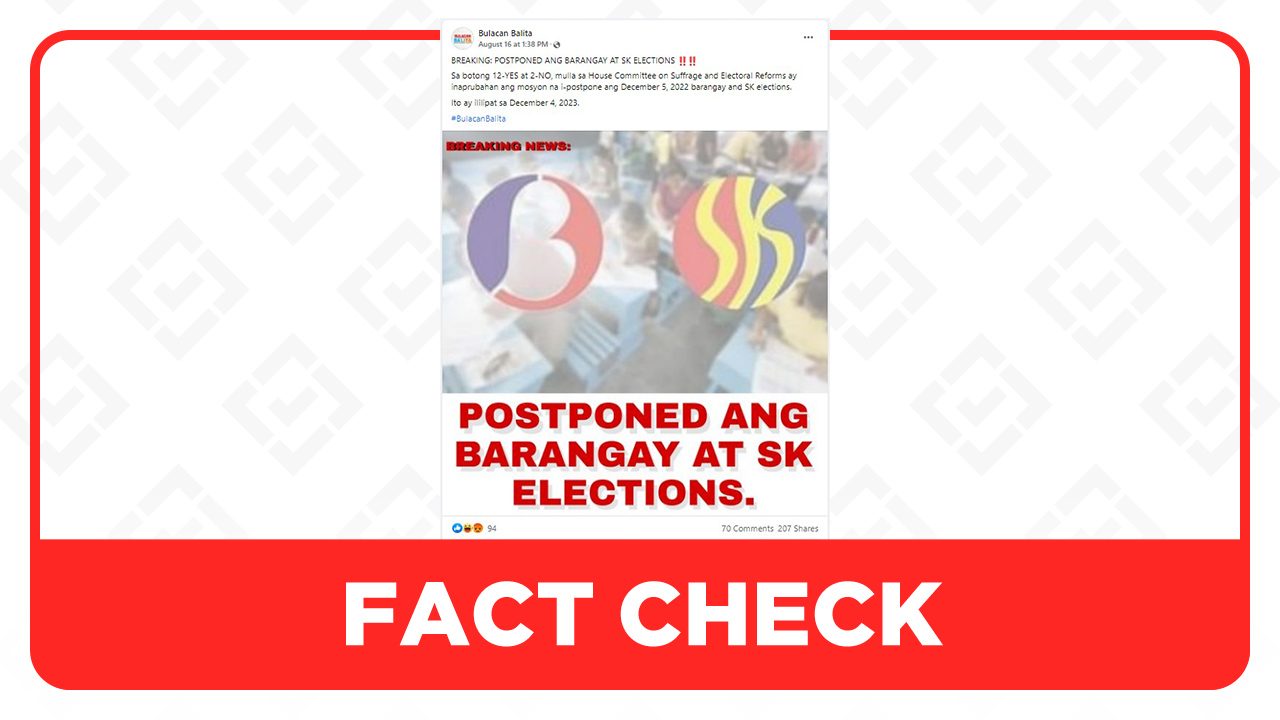 Claim: The Barangay and Sangguniang Kabataan (SK) elections scheduled in December 2022 are postponed.

Why we fact-checked this: The Facebook post with this claim has 207 shares, 70 comments, and 94 reactions, as of writing.

The bottomline: No law providing for the postponement of the barangay and SK elections scheduled on December 5, 2022 has been enacted.

Law required: Section 42 of the Local Government Code mandates that the date of local elections, barangay and SK elections, is scheduled on the second Monday of May, unless otherwise provided by law.

The said provision had been amended five times in the past – rescheduling the supposed date of the elections –  with Republic Act No. 11462 being the latest law, which postponed the May 2020 election to December 5, 2022.

Still pending in Congress: The House panel on suffrage and electoral reforms, on August 25, voted 11-0 on the substitute bill, which seeks the postponement of the said election to the first Monday of December 2023.

The said proposal is still subject to the House plenary’s approval for the proposed bill to move forward. It will also need an approved Senate version. Both House and Senate versions will have to be reconciled at the conference committee, which will debate and deliberate on the bill. The final version must be signed by the president into law or it can lapse into law when it is left unsigned for 30 days upon receipt.

The Commission on Elections, however, earlier warned about the additional costs that a postponement would bring. Voter registration, for one, will need to continue if the election is moved to 2023.

Still, no law postponing the election has been passed. Currently, there are three pending Senate bills and at least 38 House bills filed with the Congress that seek the postponement of the election scheduled for December 2022. – Ailla Dela Cruz/Rappler.com