FALSE: Media did not report on 23 additional quarantine facilities 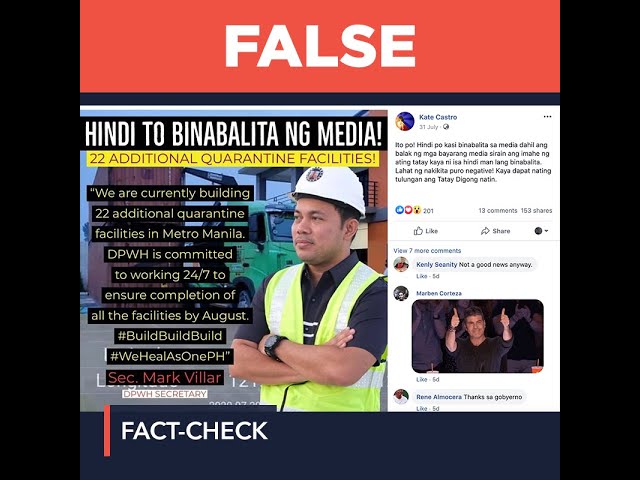 Media agencies did not report on the construction of 22 additional quarantine facilities in Metro Manila, a project spearheaded by the Department of Public Works and Highways (DPWH).

(Media isn’t reporting this because paid media agencies plan to destroy the image of our father [President Rodrigo Duterte] which is why it is not being reported. All they see is the negative. This is why our Tatay Digong needs our help.)

The image includes a quote attributed to Villar, which says, “We are currently building 22 additional quarantine facilities in Metro Manila. DPWH is committed to working 24/7 to ensure completion of all the facilities by August. #BuildBuildBuild #WeHealAsOnePH.”

The post gained 201 reactions, 153 shares, and 13 comments since it was published on Saturday, August 1. It was no longer available as of Friday, August 7.

At least 3 media agencies thus far have reported about the construction of these additional quarantine facilities. These media agencies include CNN, Inquirer, and GMA.

CNN published their article about the additional facilities on July 30, with the headline “DPWH eyes completion of 22 new COVID-19 isolation facilities by August.”

Inquirer did the same on August 3, with its article titled, “DPWH eyes to finish 23 quarantine sites in Metro Manila by end of August.”

GMA News reported the story also on August 3, under the headline “DPWH: 23 new quarantine facilities in NCR to be completed this month.”

The official DPWH and Philippine News Agency websites also published their own articles about the construction on August 3 and August 4, respectively.

The quote in the claim attributed to Villar is accurate and is from his Friday, July 31, Facebook post.

No evidence suggests that media agencies have been bribed by anti-Duterte groups or individuals to refuse reporting on this matter. – Aleijn Reintegrado/Rappler.com