Facebook Twitter Copy URL
Copied
Lawmakers are asking for the increase, not the Office of the Vice President. The OVP is requesting for an allocation of P723 million. 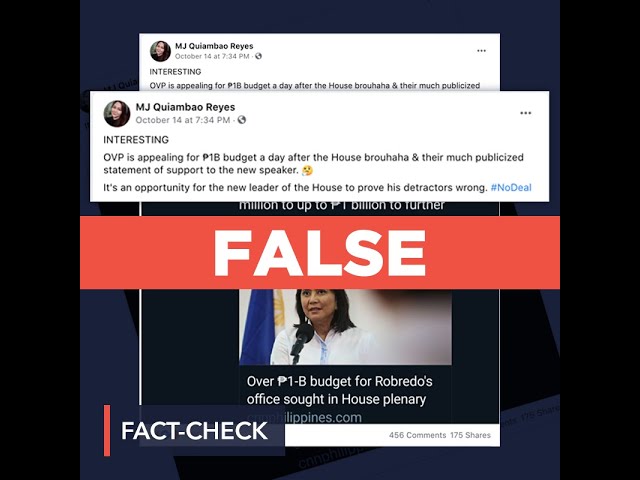 The Office of the Vice President (OVP) is appealing for its 2021 budget to be increased to P1 billion.

Facebook user MJ Quiambao Reyes posted this claim on Wednesday, October 14. The post had a screenshot of a tweet from the official Twitter of CNN Philippines. As of writing, it had over 1,900 reactions, 456 comments, and 175 shares.

A reader sent the post to the fact-checking group Fact-checking in the Philippines for verification. Facebook’s monitoring tool Claim Check also flagged the post for containing potentially false information.

Lawmakers proposed to increase the OVP’s budget to over P1 billion, not the OVP itself. The OVP is only requesting a budget increase of roughly P44 million. (READ: Lawmakers seek higher funds for Robredo office following DBM’s budget cut)

The OVP originally requested a P723.39-million budget for 2021, but the Department of Budget and Management set the OVP budget ceiling at P679.74 million under the National Expenditure Program. This is smaller than OVP’s 2020 budget of P708.01 million.

Vice President Leni Robredo, who appeared at the House hearing in September, welcomed the lawmakers’ proposal but said that they will “make do” with what is given to them. The House committee on appropriations terminated the budget hearing that same day without approving the proposed increase.

The Senate committee on finance also quickly approved OVP’s budget on September 30, but some senators expressed support for Robredo’s request for the roughly P44 million to be restored to her office’s 2021 budget. (READ: Done in 21 minutes: Senate panel approves OVP budget for 2021)

During the plenary deliberations on October 14, House members reiterated their appeal to raise OVP’s budget to over P1 billion.

The CNN Philippines article, which was in the screenshot of Reyes’ post, clearly stated that House lawmakers sought the increase to P1 billion “to allow the OVP to continue efforts in reaching out to different pandemic-hit sectors.” The article also mentioned that the OVP was only asking for a P723-million budget in 2021.

Robredo said the roughly P44-million increase requested by the OVP was meant for research and development, and for the replacement of 6 vehicles that could no longer be used. – Pauline Macaraeg/Rappler.com