FALSE: Media did not report on deficiencies in OVP spending flagged by COA 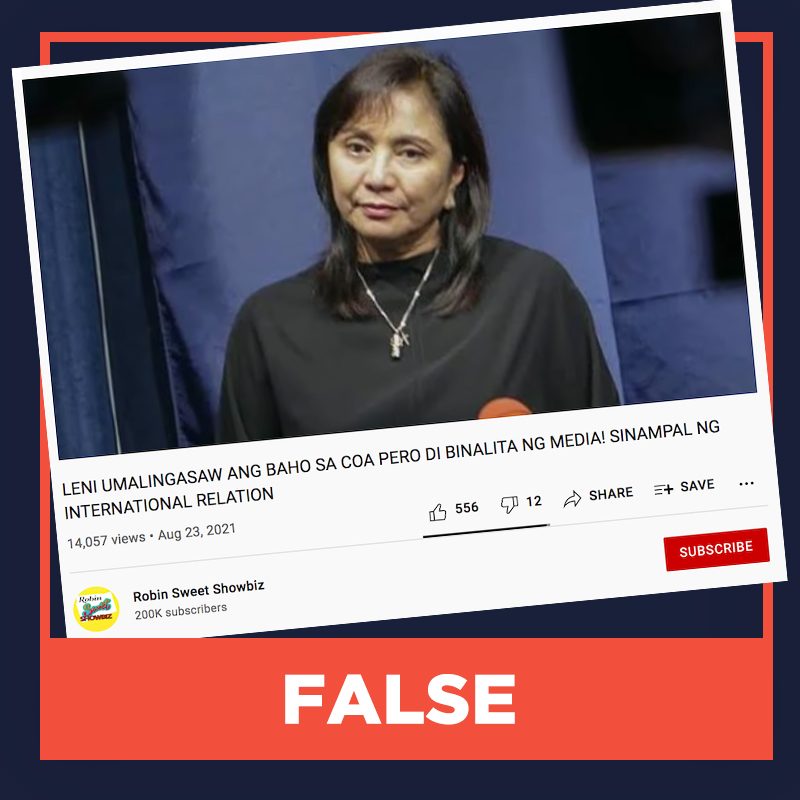 YouTube channel Robin Sweet Showbiz posted a video on August 23 falsely claiming that the media did not report particular deficiencies shown in the 2020 annual audit report (AAR) on the Office of the Vice President (OVP) under Vice President Leni Robredo.

(This is about relief goods, in-kind donations, where deficiencies were apparently flagged, but why were they not reported by the mainstream media? This is the exposé by international relations expert Ms. Sass Rogando Sasot.)

A post by Sasot cited COA’s observations with regard to the verification of in-kind donations received by the OVP, among others. These included “lack of item description, unit, quantity, and cost of several items, inclusion in the relief packs was not itemized, and variances between the summary/list of donations and distribution list.”

This was mentioned in a number of news reports. First, Manila Bulletin published a report on July 1, 2021, entitled “Deficiencies found despite OVP’s ‘highest audit ratings’ from COA.”

Meanwhile, the OVP responded to these observations by attributing the discrepancies mostly to the “difference in the unit of measure of the summary/list of donations and the distribution report,” and said that some pre-packed kits with varying contents were not repacked but distributed as is.

The audit team gave further recommendations and said, “We acknowledged the difficulty experienced by OVP due to voluminous in-kind donations received during the period of quarantine when the accuracy of the reports needs to be established as well.”

For the third consecutive year, COA gave the OVP its “unqualified opinion,” which is the highest audit rating.

FALSE: Palparan did not get media attention in prison before SMNI interview