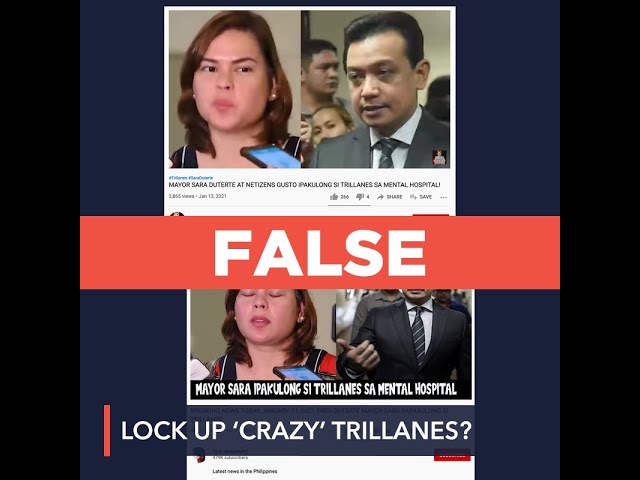 This is false. Mayor Duterte did call Trillanes “crazy” in an interview back in 2018, but she never said that she wanted to lock up the former senator in a mental institution. The clips used in the videos were from this interview.

The official Facebook page of the City Government of Davao uploaded the interview on February 5, 2018, where Duterte was asked if she would file a complaint against Trillanes in relation to the plunder complaint filed by the former senator against President Rodrigo Duterte in May 2016.

There was no mention of a mental hospital in the whole interview, which lasted for almost 3 minutes.

In 2016, Trillanes alleged that there was P2.4 billion worth of deposits in President Duterte’s account and that funds could be coming from a possible scheme of hiring ghost employees in Davao City. On February 13, 2018, Solicitor General Jose Calida said the Office of the Ombudsman already “closed and terminated” the investigation into the plunder complaint in November 2017.

The two videos had 446,615 combined views as of writing. The videos were spotted through social media monitoring tool CrowdTangle. – Pauline Macaraeg/Rappler.com