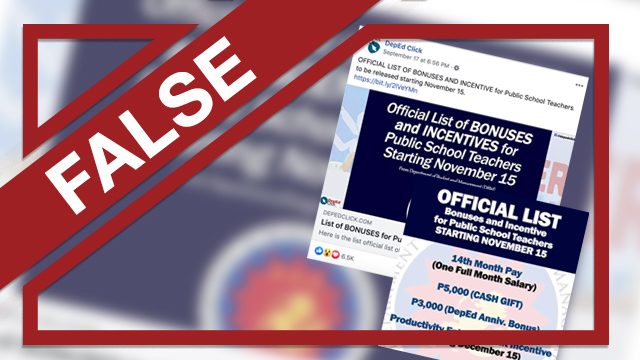 Website DepEd Click posted an article on September 17, 2019 listing the bonuses to be received by public school teachers starting November 15 of “every year.” A reader emailed the post to Rappler for fact checking.

Along with the anniversary bonus, DepEd Click also said teachers are entitled to a 14th-month pay, a P5,000 cash gift, and productivity enhancement incentive (PEI). The website called it the “official list of the bonuses and incentive for public school teachers.”

As of writing, Deped Click’s post on Facebook got over 2,000 shares, 6,500 reactions, and 361 comments. Social media monitoring tool CrowdTangle also estimated that the link got over 12,585 Facebook engagements from posts shared by private accounts.

The facts: Public school teachers are not entitled to the Department of Education (DepEd) anniversary bonus this year, because it is only given every 5 years. The last time it was given was in 2018.

“It is given only in milestone years – every 5 years. So next anniv bonus will be on 2023,” clarified Annalyn Sevilla, DepEd undersecretary for finance-budget and performance monitoring.

DepEd Click’s post is also not the official list of bonuses to be received by public school teachers in the country because the list did not come from DepEd.

Sevilla also confirmed to Rappler that the website is not affiliated with the department.

This is not the first time Rappler has fact checked DepEd Click. Earlier this month, the website also made a claim that there is no pay hike for teachers in proposed 2020 budget, which was misleading. – Pauline Macaraeg/Rappler.com