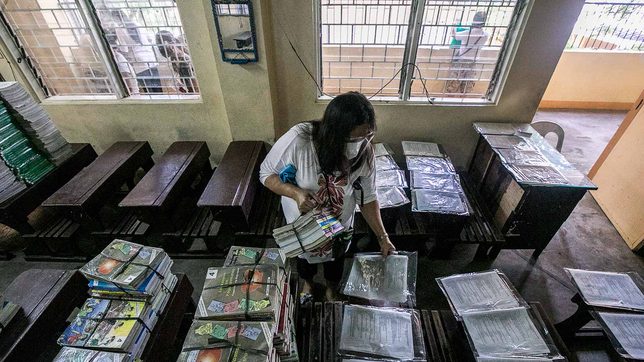 Facebook Twitter Copy URL
Copied
If the system is not carefully planned and thought out, things will not change for the better

At a small corner of a principal’s office in a public elementary school in Laguna are a wooden table and two plastic chairs reserved for emergency health consultations between a teacher and an ill student.

The makeshift clinic, as Dana* described it, has no bed, much less a nurse, and only a first aid kit pouch.

Dana, a teacher and also the Red Cross coordinator of the school, said that this would be a problem when face-to-face classes resume in 2021.

Nearly 10 months into the pandemic, government officials considered the proposed resumption of face-to-face classes as they expressed apprehensions about the ability of students – especially those unable to take online classes – to retain and process knowledge from the current modes of distance learning. (READ: FAST FACTS: DepEd’s distance learning)

Several groups have denounced the plan, saying that opening classrooms in the middle of a still untamed pandemic is dangerous, given the lack of health facilities in schools.

Meanwhile, the Department of Health (DOH), said that it supports face-to-face classes in low-risk areas, or areas where the pandemic is under control.

The DOH also said that health facilities in schools should be made available in compliance with minimum health standards, which include frequent handwashing and physical distancing.

Dana, however, said that aside from the lack of a school clinic, they also don’t have enough handwashing facilities for their over 300 students.

(We have handwashing facility because it was the project of the PTA before. But it’s only one. It is located in the middle of our school near the covered court.)

This would pose a problem since immediate attention is needed when a student figures in an emergency related to the raging pandemic. To date, it has infected over 452,000 people in the country.

On December 14, Malacañang announced that President Rodrigo Duterte had approved a trial run of face-to-face classes in areas deemed “low risk” for COVID-19.

The approved proposal put forth by the DepEd involves the “pilot implementation or dry run of face-to-face classes in select schools within areas with low COVID risk for the whole month of January 2021.”

Regional field units of the DepEd have nominated 1,114 schools to join the dry run, which Secretary Leonor Briones will finalize on December 28.

Briones said that 3 areas, including virus epicenter Metro Manila, asked to be excluded from the dry run. The other two were Davao and Cotabato.

She noted that the actual number of schools that will participate in the dry run scheduled to take place from January 11 to 23, will be “very much lesser than the 1,114.” After the pilot, the DepEd will evaluate starting January 25.

Not a few have expressed misgivings about the dry run as this could expose students and teachers alike to the virus. However, the DepEd gave assurances the pilot test will only be done “under strict health and safety measures, and where there is commitment for shared responsibility among DepEd, local government units, and parents.”

It also said that students are not compelled to participate in the dry run and that it requires consent from parents allowing their children to join the limited face-to-face classes.

What is a low-risk area?

A low-risk area has an ADAR that is less than 1. ADAR is the number of new cases in a city or province over a two-week period, divided by the population of the city or province.

Rappler asked the DOH for the list of areas considered low-risk now, but Health Undersecretary Maria Rosario Vergeire said they could not provide it because “this might have misinterpretations [from the public]” and because the list was really used “for quarantine classification levels.”

Meanwhile, here are the provinces in the Philippines with the least number of reported cases as of December 13:

According to the World Health Organization (WHO), data suggests that children under the age of 18 comprise only 8.5% of the reported cases of COVID-19, with relatively few deaths compared to other age groups. They are often mild cases, too.

But the Centers for Disease Control and Prevention (CDC) warned that children, like adults, who have COVID-19 but have no symptoms can still spread the virus to others.

“Most children with COVID-19 have mild symptoms or have no symptoms at all. However, some children can get severely ill from COVID-19. They might require hospitalization, intensive care, or a ventilator to help them breathe. In rare cases, they might die,” the CDC said.

Dana is afraid that children will become superspreaders of the virus. She said that students will surely be excited when classrooms open again after months of being on lockdown.

“They are children. It’s possible they will contract the virus among themselves. They won’t be able to contain their excitement once they see each other. Once they are allowed to go to school, they will play. Then they will go home to their families who could include vulnerable grandparents,” she said in Filipino.

Education Secretary Briones, who has recovered from COVID-19, assured the public that “limited” face-to-face classes would be done in “absolutely safe areas.”

University of the Philippines Professor Jomar Rabajante, an expert studying the coronavirus outbreak in the country, said that if there is “zero or very low number of cases in the area,” face-to-face classes can be considered, given the following conditions:

Rabajante said the logic for prioritizing elementary students is that they have less activities than the upper levels so superspreader events could be avoided.

Meanwhile, schools in other countries have closed again, following a spike in COVID-19 cases. In South Korea, for example, schools in Seoul and surrounding areas were ordered closed from December 15 after the worst outbreak of COVID-19 erupted since the pandemic began, surpassing even the previous peak in February.

Dana said that while face-to-face classes are more effective than the distance learning system, students would be safer in the current remote setup. (READ: Mistakes were made: Errors in DepEd distance learning materials)

(Let’s not do face-to-face classes this school year. Let’s just continue first with how we started. But I hope that they will be able to address the gaps, especially in resources.)

For Dana, the government must use the remaining months of the school year to strategize for the safe return of students to school.

In a statement on December 3, the Alliance of Concerned Teachers said that the government should first address the gaps in health infrastructure in schools before resuming face-to-face classes.

“How will the government ensure these given the big shortages in classrooms and teachers, the lack of water supply and handwashing facilities in schools, and the glaring absence of school nurses?” the group asked.

Classroom shortages have been a problem even before the pandemic. A class of 75 to 80 students were packed into one classroom supposedly meant for a class of only 40. To make up for the lack of classrooms, class shifting had been implemented to accommodate enrollees every year. (READ: Classroom shortages greet teachers, students in opening of classes)

One of the ideas being floated was to conduct classes in batches. For example, a class of 45 would be divided into 3 batches.

In a press briefing on Wednesday, December 16, Education Undersecretary Nepomuceno Malaluan said that DepEd is giving its regional units the “flexibility” to schedule their face-to-face classes, noting that students in the classroom should be limited to only 15 to 20 students at a time.

But for Dana, this is another looming problem, considering that she handles 45 students in her class and she teaches 7 subjects to her grade 1 students.

“That would mean that if there were 3 batches, we, teachers, would have to teach a subject thrice. Our energy levels for the first batch would be different from the succeeding batches. We would be tired by then. We might not have enough energy for the last batch. Students will suffer,” she said in a mix of Filipino and English.

If the system will not be carefully planned and thought out, things will not change for the better. – Rappler.com