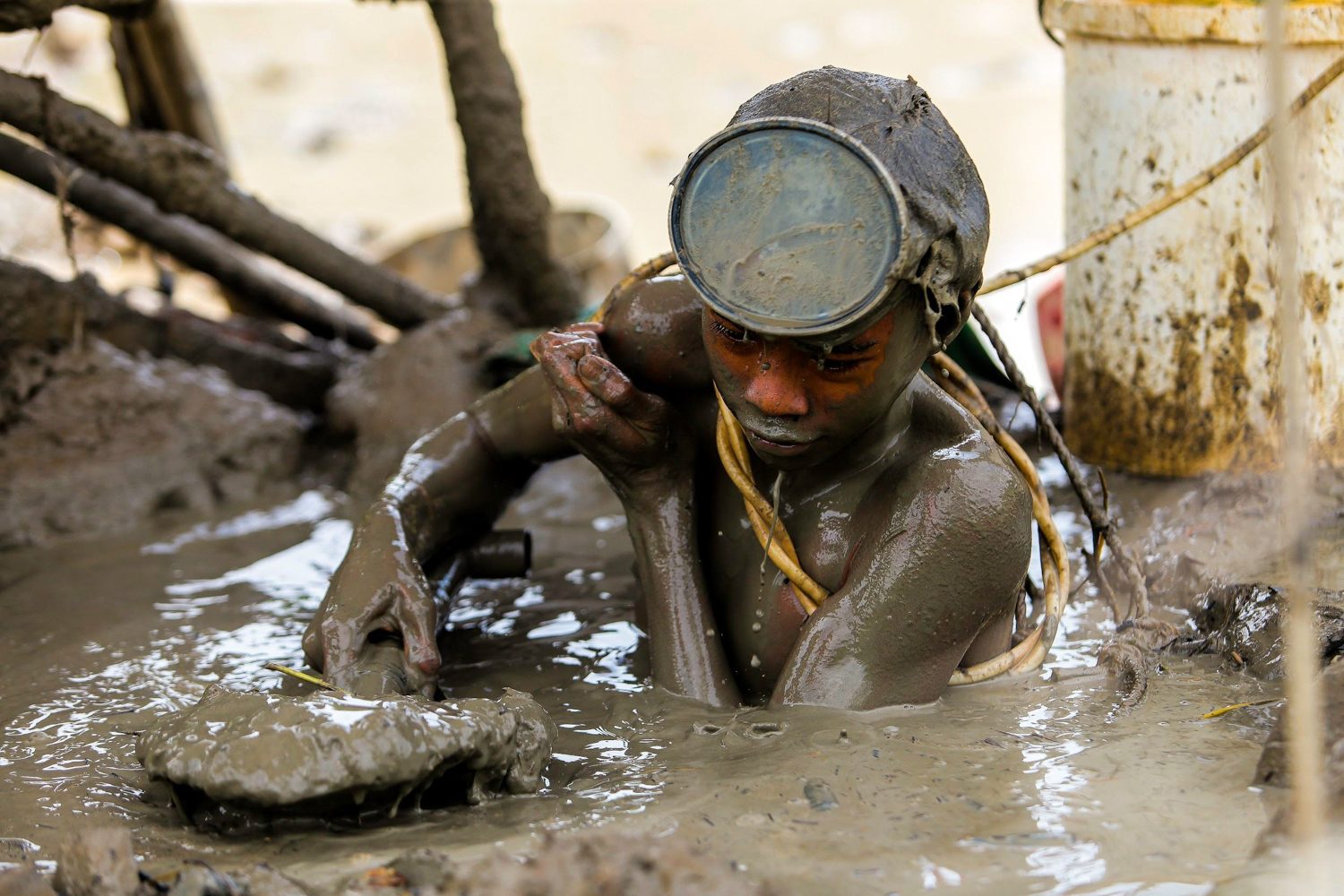 CHILD LABOR. Drenched with mud, a boy rises from his dive in a 40-feet tunnel using a compressor hose on August 14, 2021, in the village of Gumaus, Paracale, in Camarines Norte.

Facebook Twitter Copy URL
Copied
The Philippines had been making slow progress in its long fight against child labor, but the pandemic reversed the gains that had been made

The children of the village of Malaya were freed from child labor four years ago, but the pandemic has brought them back to where they were – a life of dangerous and backbreaking work from which there may be no escape.

In 2017, a government program took in Eron, then 15, from the mines of Malaya in Labo, a town in the gold-rich province of Camarines Norte in southern Luzon, the largest of the Philippine islands.

“I was very happy then,” he said. “I could go to school without thinking about earning money. I felt that my life had taken the right direction.”

The pilot program Eron took part in provided education and other support for 49 of 70 underaged youths employed in small-scale gold mining operations in Malaya. Called the Strategic Help Desks for Information, Education, Livelihood, and other Developmental Intervention (SHIELD), it was a joint project of the government’s social welfare department and international NGOs.

At the time, the Philippines was already making slow progress in its long fight against hazardous child labor. Malaya, a Filipino word which means “free,” was one of the two towns in Camarines Norte formally recognized by the government as small-scale mining areas. This recognition meant that these towns would commit to taking children out of hazardous work and former child workers would qualify for government assistance.

Camarines Norte, a poor province with large, untapped gold deposits, is a hotbed for illegal artisanal and small-scale mining funded by local businessmen. Mining is one of the few job opportunities there, so Eron, like many youths in his village, grew up with his father working in the mines while his mother spent hours on most days panning for gold in the Bosigon River.

The children’s work exposes them to mercury, which they handle with their bare hands so they can mix it with the gold ore to create refined gold.  Mercury is a toxic metal that has no known safe level of exposure and can be fatal. It can hurt the nervous, cardiovascular, digestive, and immune systems, and can also damage the lungs.

In most parts of Camarines Norte, many children also dive deep into mud-filled mine tunnels to search for gold. They do this with a diesel-powered compressor hose that provides oxygen. In 2015, Human Rights Watch reported that this practice put underage mine workers at risk of drowning, decompression sickness, and bacterial infections.

In 2011, the Philippine Statistics Authority reported that there were 2.1 million Filipino child workers, nearly all of whom work hazardous jobs, including small-scale mining.

Philippine law prohibits children from engaging in any form of hazardous labor. It allows only two forms of child work: employment in the entertainment industry or in family-run businesses as long as the children are continuously provided with education.

Since 1948, the Philippines has been a member of the International Labour Organization (ILO), a United Nations agency that considers mining hazardous for children and has mandated its member organizations to commit themselves to eliminating all forms of hazardous child work.

But these laws and commitments are honored more in the breach. The Philippine government has committed to removing all 2 million children out of the worst forms of child labor by 2022, as stated in the Philippine Development Plan. It has also committed to the United Nations Sustainable Development Goals, which aim to end child labor by 2025. The country is unlikely to meet any of these targets.

A program to rescue children

The Department of Social Welfare and Development launched SHIELD, an ILO-supported program, in 2017.

“The SHIELD program was initiated so that we can see the problems of the children,” said Lovely Galicia, a social worker employed by the town of Labo. “Since 2017, we have traced that the reason why these children engage in such dangerous work was for them to fund their education. We heard them and we asked what they think can solve this and their answer was the same – education.”

In Malaya, the nearest school was 17 kilometers from the village center and the children needed to walk two to three hours each way to attend classes.  SHIELD provided funds and school supplies so the minors who were withdrawn from the mines could go to school.

When the COVID-19 pandemic struck, classes moved online. Those who didn’t have internet access were given the option to do modular learning, which meant children had to study on their own and claim their weekly printed materials from the school. The Department of Education has reported that nearly 3 million schoolchildren in the entire country didn’t enroll in school year 2020-2021 because of pandemic-related difficulties.

Eron was among the millions of children who struggled to cope. “I’d rather go to school and learn face-to-face with my classmates,” he said. The hardest part, Eron explained, was that they were obliged to learn on their own and answer the questions in the modules.

“Sometimes I do not understand the lesson, especially in music. Once a week we get to consult with our teacher online, but the internet here is very weak, and I’d usually miss the chance to ask,” he continued.

Eron didn’t enroll  the following school year. At age 16, he was still in the seventh grade; most of his classmates were age 13.

Eron also saw his parents struggling to put food on the table, so he decided to step up. His four older siblings are married and no longer living at home. Eron was the oldest of the remaining four children still relying on parental support.

By then, mining operations had stopped because of the pandemic and Eron’s family had to make do with panning gold by the river. Meanwhile, gold prices had also dipped. In the past, families could sell matchstick-sized gold pieces for around $15 (P748.38). Now, they’re being offered only $10 (P498.92) apiece.

“No parent would ever want their child to work for them,” said Lydia, Eron’s mother, who has panned gold for years to supplement the family income. “But I can’t really do anything especially when they insist and tell me that they, too, are struggling and would rather help.”

“Right now,” she said, “there’s not much gold in the river anymore, the prices are really low, and we can really use an extra hand.”

When Eron dropped out of school in 2020, he joined his mother and sometimes his father in panning for gold and then mixing it with mercury. “Sometimes, after 10 hours in the river, I still can’t find something worth $10, the most I have earned was just $4 (P199.57),” he said. He would use that money to buy a kilo and a half of rice to take home.

Eron misses the days when his only worry was whether he could catch the jeepney that left the village each morning so he could get a free ride to school.

From the start, SHIELD was slowed down by bureaucratic problems.

In the beginning, the program distributed financial help directly to the youths withdrawn from the mines. But new rules required the children to apply to get the aid.

Galicia, the social worker, said that since the pandemic hit their work is “back to zero.” They have been unable to keep track of the number of children who have returned to mining.

“It’s really hard especially during the height of the pandemic, we can’t prioritize and focus on the situation on the ground since we were also considering that we might be carriers of the virus,” she said. “Then we had issues with the funding, so we were also a bit hesitant to come up here in the community without any money to help them.”

This year, the town government allocated $60,000 (P2.99 million) for child labor programs but the money has yet to be used because government workers have not been able to report for work and all government programs have been stalled, said Galicia.

She is still hopeful, however, that SHIELD can be revived by the town government once it’s been passed on to them. At the very least, she said, the program has already provided hope for the children, who felt there was a structure that was looking out for them.

“I hope I can enroll for the start of this school year in September,” Eron said. “I think I can do my school modules in the evening after mining.”

Other children in need

Many children, however, have not been helped at all. In the village of Gumaus in Paracale town, an hour and a half’s drive from Malaya, boys are risking their lives daily for meager pay.

Dylan, 14, is one of them. He was just nine when he stopped going to school to work in compressor mining.

On a sunny Saturday in August, he was deep in 40 feet of muddy water, breathing through a compressor hose as he collected soil in a mine tunnel that might contain gold. Nearby, a group of boys were huddled, waiting for him to ascend from the mud.

With him were Ryle and Vince, both 13, and also covered with mud. Unlike Dylan, who had been working for several years, the two boys just started a year ago when the pandemic left their families with no food to eat.

“Down there, it’s very dark, silent, and cold. When I start to go back up, the mud gets inside my eyes,” said Vince.

“We’re no longer afraid, we’re used to it,” said Ryle. “We can even stay under the water one hour straight.”

“I don’t have a choice, I must help my family,” Dylan said.

In a June 2021 report, the ILO and the United Nations Children’s Fund (UNICEF) warned that the number of children around the world who are engaged in child labor has risen to nearly 160 million – about 9 million more since 2016.

Because of the pandemic, the number of children in hazardous jobs has gone up to 79 million after two decades of continuous decrease

There is no way of estimating the pandemic’s impact on child labor in the Philippines, said Hassan, since there is insufficient information on who these children are. One indicator of the extent of child labor, he said, is “when you don’t see other children in school, they might be working somewhere.”

The labor department recognizes this challenge. Its last survey of child laborers was in 2011 and it had scant information on the children, making it difficult to provide services for them, said Ma. Karina Trayvilla, director of the department’s Bureau of Workers with Special Concerns. She said that in the last five years, the agency had identified only 290,000 child laborers and removed just 68,000 of them from hazardous labor.

“We are quite sad that children feel compelled to go back to work because of the pandemic. This could be the same situation in many parts of the world. But it is not a reason for any of us to give up,” said Concepcion Sardana, senior program officer of ILO- Philippines.

“The adage ‘It takes a village’ is so true – but it takes the combined efforts of all individuals, families, organizations, [and] government structures at all levels for our initiatives to address child labor to work,” she added.

Eron, meanwhile, keeps the hope alive. “I don’t think I can come out of this situation soon,” he said, looking at his hands, which are scarred from hours of gold panning. “I can’t say for sure. I hope so, but life is so hard.”

This story was supported with funding and training by the Friedrich Naumann Foundation for Freedom.