Facebook Twitter Copy URL
Copied
Cumpio, who celebrated her 22nd birthday in jail, chose to be a journalist in a region where there is a lack of independent media

A year after the arrest of Tacloban-based journalist Frenchie Mae Cumpio, her colleagues in alternative media say she is still in good spirits.

Cumpio was arrested on February 7, 2020, at the Eastern Vista staff house in Tacloban City, Leyte, during a series of raids on what the military claimed were “identified Commmunist Terrorist Group safe houses.”

Also arrested were activists  Marielle Domequil, Alexander Philip Abinguna, Marissa Cabaljo, and Mira Legion. They were all charged with illegal possession of firearms and were tagged as suspected members of the New People’s Army.

The young journalist and human rights activist was one of the first arrested in a year of repression against vocal citizens, activists, and journalists.

The manner of her arrest is consistent with how others like her have been detained across the country.

First there is a search warrant. Then a raid. Then the police find explosives.

This is also how young activist Reina Mae Nasino – who was pregnant at the time – was arrested in 2019.

Another journalist of progressive news outlet Manila Today Lady Ann Salem was also charged with possession of illegal firearms and explosives after police raided her home in Mandaluyong on December 10, 2020.

The court later cleared Salem and voided the search warrant against her. 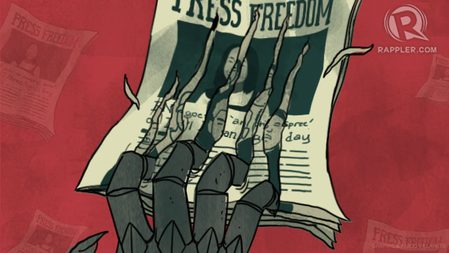 Salem is one of the lucky ones as illegal possession of firearms is a non-bailable offense and is precisely why many journalists and activists arrested under these circumstances have a slim chance of being released.

Cumpio, meanwhile, waits for her day in court.

Cumpio, who celebrated her 22nd birthday in jail, chose to be a journalist in a region where there is a lack of independent media.

In 2018, she became a member of Altermidya, a network of smaller independent media, after joining Leyte-based online alternative news publication Eastern Vista.

She also anchored a local radio program in Aksyon Radyo-Tacloban DYVL where she discussed social justice and other local issues.

Her colleagues in the media say they look up to Cumpio for her dedication to journalism despite her relatively young age. Padilla told Rappler she was “amazed” by Cumpio’s “passion and commitment.”

From 2018 up to her arrest in 2020, Cumpio reported on a wide variety of human rights issues that covered the killings of farmers in Northern Samar; the violent conflict fueled by President Rodrigo Duterte’s Memorandum No. 32, or the deployment of more military personnel in alleged rebel hotbeds, including Samar; Negros Oriental and Negros Occidental; land-grabbing; and post-disaster relief operations.

Having started as a student journalist, Cumpio also lent her time giving workshops and having discussions with then-fellow campus journalists.

Neil Eco, a staff member of UP Vista, UP Tacloban’s official campus publication, recalled that he first met Cumpio during his early days at the student paper.

“She was there at the orientation to give an educational discussion on the ‘tools for analysis,’” he said.

Cumpio had dealt with intimidation and threats months before her arrest.

By the end of 2019, Cumpio reportedly alerted her colleagues in Altermidya that she was being tailed by unidentified men aboard motorcycles in Tacloban. Padilla said she informed them during an Altermidya meeting in December 2019, the last time the two interacted before her arrest.

Days prior to her arrest, a funeral wreath with Cumpio’s picture was delivered to the same staff house where she was arrested in.

Now, over a year after her arrest, Padilla said Cumpio still maintains the same cheerfulness she held when she was free. In photos sent by her lawyers, Cumpio is often seen beaming a smile despite being behind bars.

“Every time we ask for a photo from the lawyer, she’s always smiling, grinning. For us, we’re angry about the situation because it’s taking so long. It’s been a year,” Padilla said.

According to a report by the Philippine Collegian, in July of 2020, the court junked a petition filed by Cumpio’s legal counsel to exclude evidence, and to quash the information and search warrant used for her arrest.

The National Union of Journalists of the Philippines, in a statement released to commemorate the anniversary of her arrest on Sunday, said Cumpio’s story is a “travesty that has become all too familiar.”

“The ordeal of Frenchie Mae is part of the increasing persecution of the critical media by the forces of a government so intolerant of criticism and dissent that the mere exercise of democratic rights is enough for one to be branded an ‘enemy of the state,'” the statement read.

The road ahead is long for Cumpio. But if these lines she managed to get out are any indication, she has not given up hope yet.

“And if you’re going to speak,
I hope you also speak for yourself
You, who’re nothing but one of them
Poor citizen of this nation, wrapped in false comfort.”