Facebook Twitter Copy URL
Copied
Producers, not paid for more than a year, have stopped producing lessons for DepEd TV 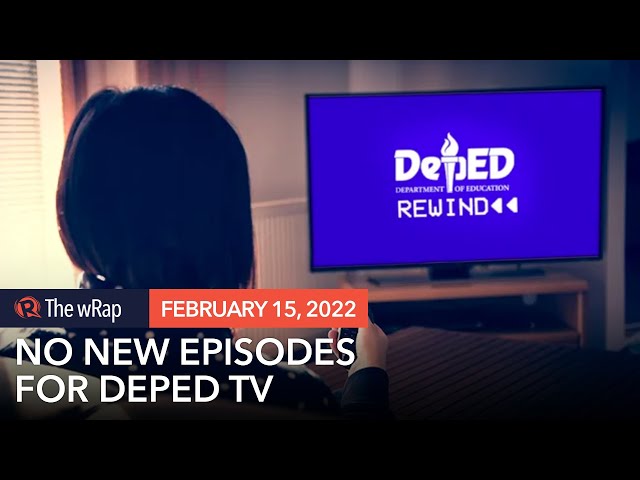 MANILA, Philippines – The Department of Education’s DepEd TV, a platform for students who don’t have access to internet at home, has stopped airing fresh episodes – therefore, no new lessons – since October 2021, Rappler has learned.

There are some 26 million basic education students enrolled for school year 2021-2022. Due to the pandemic, starting in 2020, schools in the country shifted to a distance learning system – a mix of online learning, modules, and TV and radio programs. There are 60,000 public and private elementary and high schools in the country.

The educational programs were based on the self-learning modules distributed to students. Ideally, TV lessons should be synchronous with SLMs. The department had allocated P45 million for the first phase of the DepEd TV project.

According to the producer, they were supposed to produce some 5,000 TV lessons for the whole school year, but they had turned in only around 2,000 episodes when they decided to stop the production.

Education Undersecretary Alain Pascua confirmed to Rappler that producers stopped production in October 2021. But he seemed unbothered by the move.

When asked if DepEd did something to convince the producers not to halt production, he said: “They did not advise DepEd. They advised Ei2. DepEd has no contractual relationship with those producers.”

But a screenshot of conversation by one of the producers and DepEd Director Abram Abanil, who’s also in-charge of DepEd TV, retrieved by Rappler tells otherwise. In the conversation thread, Abanil acknowledged the advise by the producer.

The DepEd tapped Ei2 Tech, a production company owned by news anchor Paolo Bediones, to produce the TV episodes for distance learning. Bediones’ production house, however, was marred by controversy as some media workers he contracted for the project reportedly remained unpaid for the work they rendered.

The decision to stop production was not easy, but the source said they had to do it because they had families to feed.

“The learners are the ones suffering. It’s a very good project, but because something happened internally, the project was tainted. We patiently waited for two years, even though we were not getting paid, because we were still hoping,” the source said. In a Viber message to Rappler, Pascua said that due to non-production of TV lessons, the third and fourth grading quarters of some 26 million students would be affected.

“There will be no new lessons to be aired, until such time that the project will be successfully procured and the episodes will be delivered. Pending the decision of the BAC (Bids and Awards Committee) on the matter, we are finding other alternative ways on how to address this concern,” he said.

Pressed if DepEd was hopeful that that issue would be resolved soon, Pascua said: “I really hope so.”

What happened to the producers?

In March 2021, Rappler ran a story about media workers hired by Ei2Tech who complained about delayed compensation, with some staff saying that they had not yet received full payment for the work they had rendered since September 2020. Almost a year after the report, some of the media workers have yet to receive their compensation.

One of the former program managers of DepEd TV, requesting anonymity, told Rappler that some 200 media workers had not received their compensation amounting to P42 million.

The program manager said a total of 116 media workers agreed to file a case against Bediones in the event their attempt at a settlement fails. Their lawyers will also be sending Bediones a demand letter.

“There was no communication from their end. We’re looking forward to the demand letter that our lawyers will be sending him. Paolo mentioned to us that his accountant would be communicating with us, but until now there’s no clear direction where this is heading,” the program manager said.

Rappler reached out to Bediones for a comment on the issue, but he has not replied yet as of writing. In a Pep.PH article on January 27, he said his company was “fully aware of its obligations.”

“However, there are also some areas of dispute and compliance which have yet to be resolved, like the non-issuance of ORs, unliquidated advances, non-completion of tasks and no clearance,” he said. This is the same reason he told Rappler when we ran the story in March 2021.

Unbothered by the issues hounding the production house of Bediones, Ei2Tech in joint venture with Radenta Technologies Inc. was shortlisted for a P654-million contract for Phase 2 of the DepEd TV project, and another P30-million deal for a teacher-broadcaster project.

There’s one complication, however: for Bediones to get 60 points under the Qualification of Personnel in the Firm criterion, he allegedly used the names of 39 media workers without their consent.

The group of producers Rappler spoke to said they wrote to Education Secretary Leonor Briones, asking the DepEd to withdraw their names and documents from the bid because those were submitted without their knowledge.

Pascua told Rappler that the BAC was still reviewing the disqualification case against Bediones’ bid. – Rappler.com