He is just one among at least 54 people aged 18 years old and below killed in either police operations or vigilante-style killings in Duterte’s first year, according to data from the Children’s Legal Rights and Development Center in July 2017.

Malacañang called his death an “isolated” case. This response is not surprising as Duterte himself, in an interview with Al Jazeera in October 2016, referred to children killed in his drug war as “collateral damage.”

Below is a list of individuals aged 18 years old and below, together with college students, killed in Duterte’s war on drugs as reported by media and human rights organizations.

Althea died on September 1, 2016, from gunshot wounds sustained during a buy-bust operation against her father, Aldrick Barbon, in Guhuilngan City, Negros Oriental.

A teenager and an infant were killed, together with 4 other people, in a police raid in Maguindanao on May 2, 2017, according to a GMA News report.

The police were supposed to serve a search warrant when the suspects allegedly resisted and fought back.

Hideyoshi was killed during a buy-bust operation in Caloocan City in January 2017 for allegedly helping a drug suspect, according to a GMA News report. The police claimed the 17-year-old was armed with an Uzi submachine gun which the family denied.

Joshua was allegedly dragged by armed men to an alley near their home before being killed by Delpan beat patrolman Ronald Alvarez and a companion, according to the victim’s cousin, Jimmy Walker.

The 18-year-old is one of the 4 drug-related deaths witnesses attributed to Alvarez during the course of a 3-month investigation by Rappler’s Patricia Evangelista and Magnum Foundation photographer Carlo Gabuco. (READ: Where the drug war began) Jefferson, a criminology student and student-beneficiary of Kaibigan Foundation, was killed during a police operation on July 18, 2016, in Sta Ana, Manila.

The foundation belied the claims of police that the 20-year-old fired shots. His sister, Lovely, maintained that he was unarmed. (READ: The Drug War: Legendary)

Carl was allegedly killed in a shootout between him and police after he robbed a taxi. Suspected shabu sachets and packets of marijuana were also allegedly recovered from the 19-year-old, according to the police report.

His body was found two weeks after being reported missing by his parents. PAO autopsy results showed Carl was handcuffed, beaten up, and dragged before he was shot.

Sean was killed during an alleged police encounter in Dasmariñas, Cavite in March 2018. Myca died from injuries sustained during a police shootout during a buy-bust operation against her father Renato on June 29, 2019 in Rizal. Police claimed she was used as a “human shield,” an allegation disputed by her mother, who already filed a case against cops before the Office of the Ombudsman. Danica was preparing to go to school in Dagupan, Pangasinan on August 23, 2016, when a stray bullet took her life. Two motorcycle riders allegedly barged into their house looking for Maximo Garcia, Danica’s grandfather.

The bullet hit the 5-year-old’s nape and passed through her right cheek. (READ: Danica, my Danica)

Francis died with his father, drug surrenderee Domingo, after an unidentified gunman shot through an unopened window in Pasay City in December 2016, according to an Inquirer report.

The 5-year-old was sleeping on the floor with his mother and other siblings when the bullet hit him in the forehead.

San Niño was killed by a bullet meant for another 17-year-old teenager. He was shot  by unidentified gunmen in Consolacion, Cebu.

According to a report by Cebu Daily News, the 7-year-old was inside his home with his parents when a bullet hit him on the stomach. He was declared dead on arrival at the hospital. Kristine was hit by a stray bullet on December 22, 2016, which was meant for alleged drug suspect Allan Hernandez.  She was attending a pre-dawn mass in Laguna with her mother, Kimberly, then motorcycle-riding men made the attack. 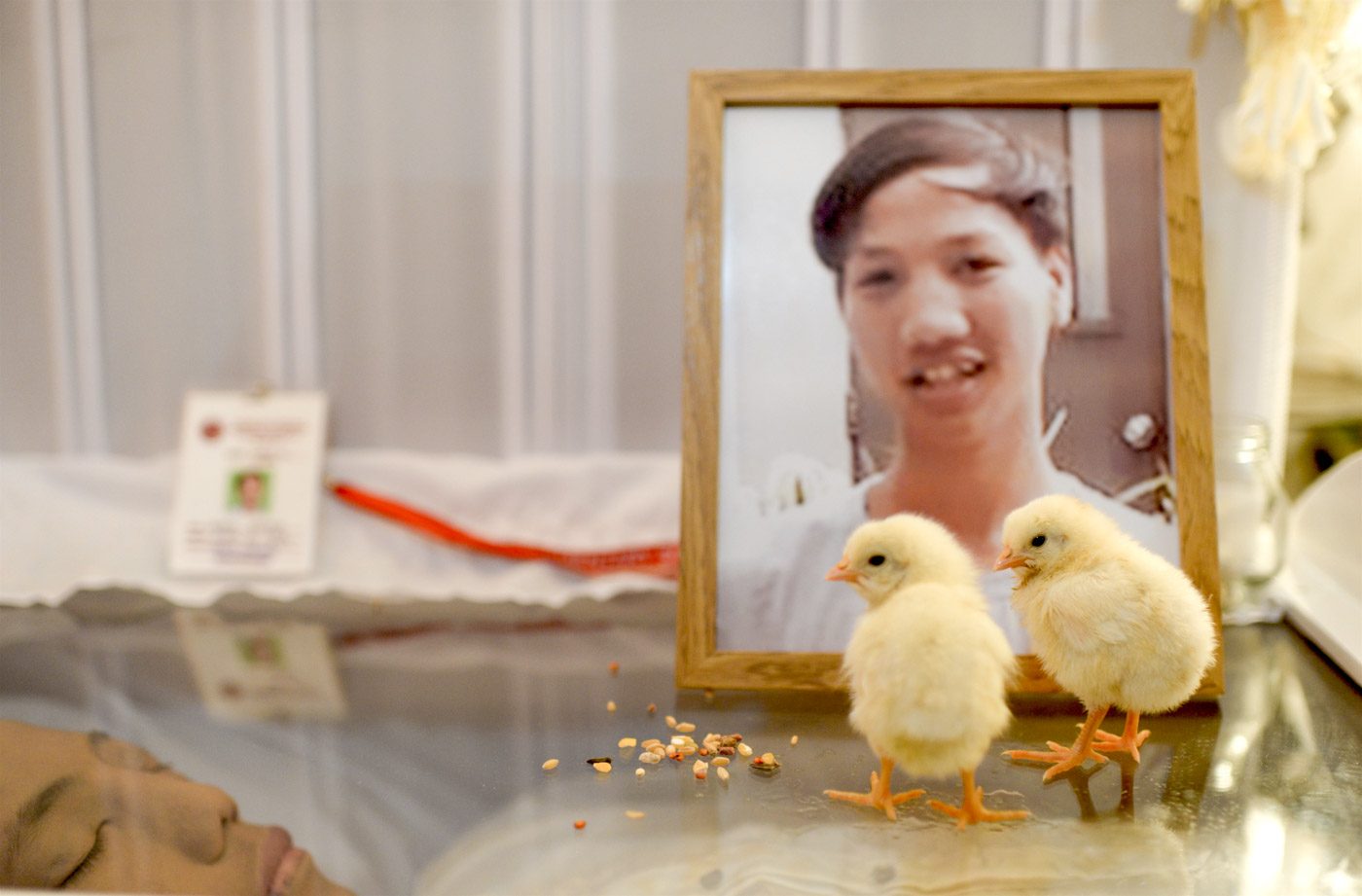 Jayross was killed by a motorcyle-riding masked gunman outside his home on September 24, 2017.  Neighbors believed it was a case of mistaken identity as the suspect was apparently after another person in their community who was included in the barangay drug list. (READ: Tragedy in Tramo: The wrong boy killed)

Michael’s bloodied body was found inside a sack in Quezon City. According to a GMA News report, he was discovered with stab wounds on his chest.

Jonel, Sonny, and Angelito were killed by masked men in Caloocan City on December 28, 2016. According to an Inquirer report, the suspects fired into the houses were the 3 were located after failing to find another alleged drug user.

Erica, also known as Angel, was killed with her boyfriend, Jerico Camitan, by gunmen on board a motorcycle in Quezon City. (READ: Jerico’s Angel)

Raymart was abducted and killed by a group of men wearing ski masks, according to an Inquirer report, after he was tagged as a marijuana seller by a neighbor in Navotas.

The 19-year-old, who was born with bilateral club foot, was allegedly asked by his abductors to run. He was shot and killed when he couldn’t. Roman was a graduating student when he was gunned down by unidentified men on July 28, 2016 in Dagupan City. He was just supposed to buy a midnight meal, according to his mother Cecil Manaois.

Fondly called Oman by family and friends, the 20-year-old was supposed to go abroad upon graduation to help his family. Rowena was on her way to enroll for her last semester in college when she disappeared.

On July 19, 2016, the 22-year-old was found dead in Manaoag, Pangasinan, with her hands tied and face covered. Around her neck was a cardboard sign that said, “Huwag tularan, pusher (Don’t emulate me; I’m a pusher.)”

Pangasinan Provincial Police said that Rowena was not part of the list of drug personalities which includes 4,755 individuals from 1,704 drug-affected barangays in the province. – With reports from Eloisa Lopez / Rappler.com