What you need to know about enforced disappearances in the Philippines Facebook Twitter Copy URL
Copied
According to latest data, there are at least 1,996 documented cases of enforced disappearance in the Philippines – 1,165 are missing while 244 were found dead

MANILA, Philippines – August 30 marks the International Day of the Victims of Enforced Disappearances.

The Philippines has a long history of issues related to human right violations. Many reported cases of enforced and involuntary disappearances have been recorded from the Marcos regime to the current administration of Rodrigo Duterte.

In 2012, President Benigno Aquino III signed into law the Anti-Enforced or Involuntary Disappearance Act which makes the crime punishable by life imprisonment.

What’s in this law and how useful is it? Rappler answers some vital questions.

What constitutes enforced or involuntary disappearance?

An enforced or involuntary disappearance has 3 elements, according to Republic Act 10353:

Not giving the information regarding the whereabouts of an abducted person leads to him or her “virtually non-existing.” This puts the person outside the protection of the law.

Under RA 10353, the penalty of reclusion perpetua or life imprisonment shall be imposed on:

How important is the law?

The law passed in 2012 is the first of its kind in Asia. It sees enforced disappearance “as a special or separate offense” from kidnapping, serious illegal detention, and/or murder, according to Nilda Sevilla, co-chairperson of Families of Victims of Involuntary Disappearance (FIND).

“It’s not only an ordinary crime but also a human rights violation,” she told Rappler.

A key provision of the law, aside from the life imprisonment part, is that it explicitly states that it is a person who has information on a case of enforced or involuntary disappearance to report in writing the whereabouts of the victim.

It also ensures the absolute right of any person deprived of liberty “to have immediate access to any form of communication available in order for him or her to inform his or her family, relative, friend, lawyer or any human rights organization on his or her whereabouts and condition.”

The law’s passage was also the culmination of 16 years of lobbying by families of victims.

“There was hope that when the law was passed, all other families will no longer suffer the same harrowing experience we had, the same pain and anxiety that we endured,” Sevilla said.

“So hindi na nga maibalik ang disappeared (Even if you cannot bring back the disappeared), at least we can prevent other families from becoming victims of enforced disappearance,” she added.

What is the situation in the Philippines now?

According to latest data from FIND, there are at least 1,996 documented cases of enforced disappearance in the Philippines since the administration of Ferdinand Marcos.

The Marcos dictatorship recorded the most number of victims with 926, followed by Corazon Aquino with 540, and Gloria Macapagal Arroyo with 336.

In the more than two years of the Duterte presidency, FIND has documented 23 victims.

The number of reported victims, however, is much higher than the documented – with a total of 2,334 across the 7 administrations.

According to Sevilla, the repressive regime and the climate of fear hinder families from reporting and becoming witnesses to enforced disappearances.

“Nahirapan talaga (They’re having a hard time) because the family members, as well as witnesses, they are afraid to speak up, to testify, or to identify the abductors because of the climate of fear,” she said.

The victims are usually political activists, farmers, members of labor unions, and students. Just recently, FIND noticed that the list of victims under the Duterte administration now includes victims with no affilitations but who come from the poorest communities. 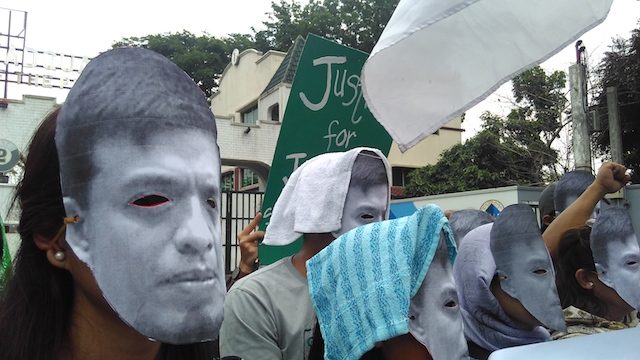 What are the roadblocks in seeking justice and preventing these disappearances from happening?

For Sevilla, the number one roadblock in the full implementation of the Anti-Enforced and Involuntary Disappearance Law is the lack of common understanding of the concept of human rights. (READ: Poor law implementation denies desaparecidos justice)

“Even among the implementors, they’re not even conscious na the law is a human rights legislation,” she said. “How can you really bring the perpetrators to court kung sa first stage pa lang, sasabihin na nila na walang probable cause kasi hindi nila alam kung ano ba ang nuances or character or nature ng enforced disappearance?”

(How can you really bring the perpetrators to the court if in the first stage, they will immediately say there’s no probable cause just because they are not aware of the nuances or character or nature of an enforced disappearance?)

The funding for implementation is also a problem. Under the law, various agencies, including the Commission on Human Rights and the Department of Social Welfare and Development, can assist victims in the form of psychosocial support.

The carrying out of these, however, continues to be a challenge due to budget issues.

Sevilla hopes that if all of these are addressed, we will see a declining number of victims.