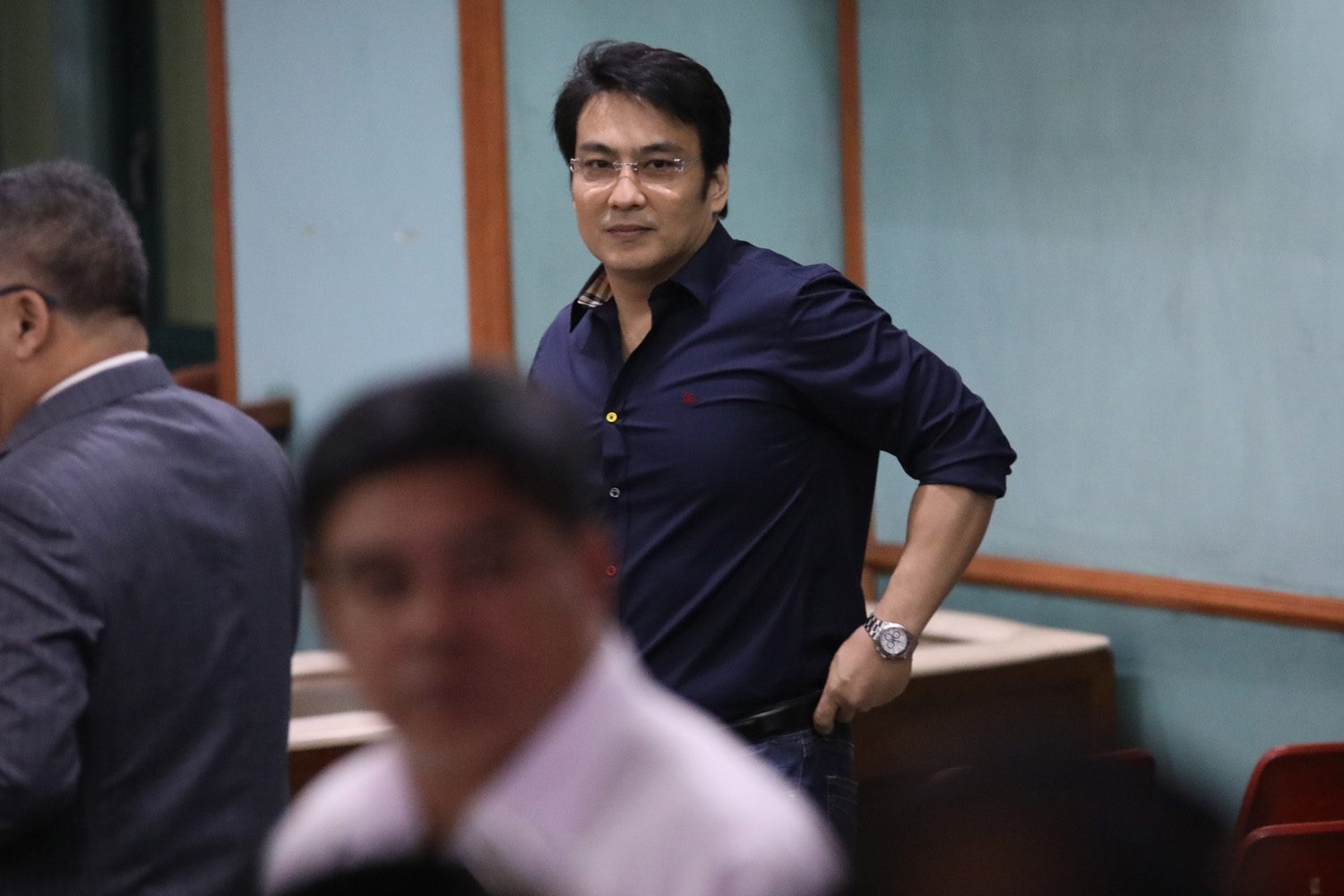 The senator, however, still faces trial for graft charges.

Here’s a rundown of events pertaining to Revilla’s involvement in the multi-billion peso pork barrel scam that shook the nation. It all began more than 5 years ago in 2013.

The Commission on Audit special report on how the lawmakers’ Priority Development Assistance Fund (PDAF) was used from 2007-2009 reveals that then-senator Bong Revilla, along with Juan Ponce Enrile and Jinggoy Estrada, served as patrons to the many dubious NGOs controlled by Napoles.

The National Bureau of Investigation files plunder cases against Revilla and the two other senators in connection with the pork barrel scam.

The Office of the Ombudsman finds probable cause to indict Revilla, Enrile, Estrada, and Napoles with plunder and graft. Then-assistant ombudsman Asryman Rafanan says Revilla earned P242 million via ghost projects funded by his own PDAF.

The Ombudsman denies the motion for reconsideration filed by the 3 senators and Napoles.

The Ombudsman officially files plunder charges before the Sandiganbayan against the accused.

Revilla faces 16 counts of graft in connection with the multi-billion-peso pork barrel scam. He addresses the Senate in a “farewell” privilege speech saying that he is ready to face the charges and possible detention head on.

The Sandiganbayan raffles the criminal charges filed against the 3 senators and Napoles. The 1st Division – headed by Associate Justice Efren dela Cruz, together with Associate Justices Rodolfo Ponferrada and Rafael Lagos – takes over Revilla’s case.

The Sandiganbayan issues a hold departure order against the accused.

The Sandiganbayan denies Revilla’s petition to suspend court proceedings on plunder and graft charges filed against him.

The Sandiganbayan 1st Division orders the arrest of Revilla and 32 other co-accused. The arrest warrants had been ordered a day before, but Justice dela Cruz was unable to sign the document within the day.

Revilla immediately surrenders, and files a motion asking the Sandiganbayan to allow him to post bail for plunder. Authorities detain Revilla at Unit One of the Philippine National Police (PNP) Custodial Center at Camp Crame.

The Ombudsman moves to amend the information on Revilla’s and his co-accused’s plunder cases, defining the senator’s role in the scam. The revisions emphasize that the “Senator was the one who amassed, accumulated, and acquired ill-gotten wealth in connivance or in conspiracy with his co-accused public officer and private individuals.”

Special prosecutors from the Ombudsman file a motion to suspend Revilla from office amid the charges filed against him by the prosecution.

The pre-trial conference on Revilla’s plunder and graft cases commences. The Sandiganbayan, however, cancels the conference after the public prosecutor fails to finish marking the documentary evidence against the senator.

Revilla attends his bail-hearing at the Sandiganbayan.

The Sandiganbayan formally suspends Revilla from office for 90 days.

Luy admits receiving about P3 million to P4 million of the kickbacks in the PDAF scam during Revilla’s hearing. The whistle-blower emphasizes that the portion he received was far smaller than those facing charges.

Luy admits that he did not see Revilla signing documents or endorsement letters to bogus NGOs, and that he never handed any money to the senator in relation to PDAF dealings.

During Revilla’s bail hearing, Ombudsman prosecutors bring out a report by the Anti Money Laundering Council (AMLC), which shows that amounts recorded by Benhur Luy in his ledger, where he notes down the kickbacks he supposedly gave to Revilla, matched details with the amounts that went into bank accounts of the Revilla family.

The Ombudsman files an ex-parte motion for the issuance of a writ of preliminary attachment or garnishment of Revilla’s assets amounting to P224 million allegedly acquired illegally from kickbacks from the pork barrel scam.

Revilla undergoes a medical check-up at St Luke’s Medical Center in Taguig upon approval of the Sandiganbayan.

The Sandiganbayan denies Revilla’s bail plea, noting in its 71-page ruling that there is strong evidence of guilt against the senator. The Sandiganbayan orders the garnishment of Revilla’s assets totalling P224.512 million that were allegedly acquired illegally from the pork barrel scam.

The anti-graft court expands the garnishment order to other properties owned by Revilla that were registered under different names. The order also includes the seizure of the senator’s joint properties with his wife, then-Cavite representative Lani Mercado and other properties under the name, Mercado Lani Hernandez.

The Supreme Court, by a vote of 13 to 1, denies Revilla’s motion to dismiss plunder and graft charges filed against him.

The SC junks with finality Revilla’s bid to dismiss the P224-million plunder case against him. The High Court says it “ruled to dismiss the petitions for lack of merit, (affirmed) the findings of probable cause and (directed) the Sandiganbayan, as the trial court to commence/continue all necessary proceedings with deliberate dispatch.”

The Court of Appeals acquits Napoles of serious illegal detention charges, saying Benhur Luy’s testimony was unbelievable. Defense teams would use this acquittal to paint Luy as a non-credible witness in the plunder case.

The trial on the plunder case against Revilla and 32 other co-accused begins.

The prosecution presents local officials, all of whom denied being beneficiaries of projects supposedly funded by Revilla through his PDAF.

Revilla does not discount the possibility that the officials may have been used in an elaborate ghost project scam, but he claims, “Biktima sila, biktima din ako (They’re victims, I am too).”

Bank tellers from the Land Bank of the Philippines (Landbank) testify on withdrawals supposedly made in connection with the pork barrel scam, despite earnest efforts by Revilla and Napoles to block their testimonies.

On the part of Asia United Bank (AUB), where Revilla has several bank accounts under several names, bank officer Eduardo Arsenio Roldan says there were suspicious transactions like daily deposits that exceeded P500,000.

Roldan, however, says the bank only filed suspicious transaction reports after the pork barrel scam scandal broke in the news. Officials of the Chinatrust Philippines Commercial Bank Corporation (CPCBC) say that the Revilla accounts were closed when news broke out in 2013.

The Sandiganbayan rules to exclude from evidence P190 million worth of Special Allotment Release Orders (SARO) from February 2010. The prosecution previously alleged that the 2010 SARO was the source of the kickbacks given to Revilla that year.

Revilla’s lawyers file a motion for leave to file a demurrer of evidence, a pleading that argues the weakness of the prosecution case is enough basis to dismiss the charges outright. The Sandiganbayan denies the motion, making it much more difficult for Revilla to secure an outright dismissal of his case.

Revilla’s camp files a petition for certiorari at the SC, asking it to stop the Sandiganbayan’s case altogether. This comes after Revilla’s lawyers’ move to file a second petition for bail that would grant him temporary liberty. They cite his fundamental rights as an accused.

Revilla files another petition before the Sandiganbayan to defer the trials while waiting for the SC to resolve it, but the petition is denied.

Marina Sula, the prosecution’s witness, reveals she had been pressured by Ombudsman prosecutors to corroborate Luy. She says it was Luy who forged Revilla’s signatures.

The SC upholds the Sandiganbayan’s order to freeze Revilla’s assets.

Luy returns to the witness stand where he describes in detail every transaction he has ever had with Revilla’s staff Richard Cambe. The whistle-blower says that while he has never seen or talked to Revilla, it is impossible for Napoles to give that much money to a mere staffer.

Awaiting judgment on the plunder charges, Revilla launches his Senate bid from jail. His wife Lani files his certificate of candidacy on his behalf.

The Sandiganbayan 1st Division creates a special division of 5 as the regular member-justices reach an impasse on whether or not to convict Revilla of plunder in the pork barrel scam scandal.

The Sandiganbayan acquits Revilla of plunder after 4 years. The anti-graft court also orders the return of P124.5 million to the Philippine treasury.

Revilla posts bail for 16 other pending counts for graft and is expected to be free after 4 years of detention. The graft cases are, however,  still undergoing trial. – with reports from Lian Buan/Rappler.com