Fact-checking: A year of infodemic 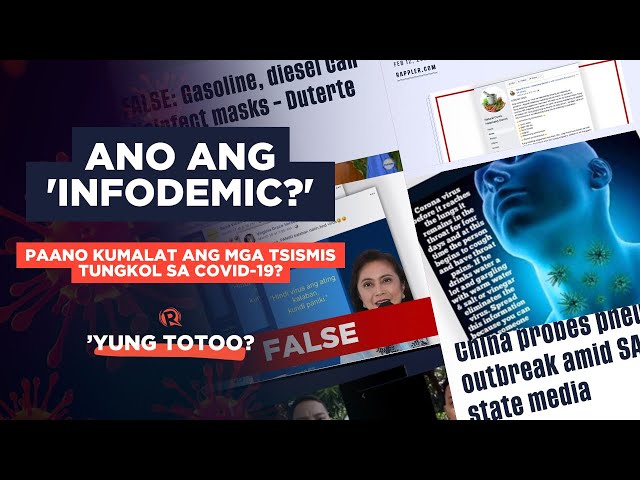 Facebook Twitter Copy URL
Copied
As we debunked one false claim about the pandemic after the other, the effect of all the falsehoods became clear: to create fear, confusion, and distrust in authorities

I debunked the first false claim related to COVID-19. The first published among members of the International Fact-Checking Network (IFCN), at least.

On January 14, two weeks after China reported the first COVID-19 case, a false chain message circulated in the Philippines, saying that a case of Severe Acute Respiratory Syndrome (SARS) was reported in a clinic at Shangri-La Plaza, a mall in Mandaluyong City.

The disease wasn’t called COVID-19 yet – people simply referred to the virus that’s causing it as the novel coronavirus – but there was speculation it might be linked to SARS.

As a member of the International Fact-Checking Network, our fact-checking team at Rappler was gearing up for more false claims about the novel coronavirus that could go viral. We were on the lookout for more dubious claims about the mysterious virus because we know that anything that hogs the headlines can also get twisted an unfortunate number of times, especially online.

I knew there was more to come. But what I didn’t expect was that it would be a deluge of misinformation and disinformation that would last for months, which would later on be referred to as an “infodemic” – a portmanteau of “information” and “epidemic.”

Coined in 2003 by an American journalist, infodemic refers to a rapid and far-reaching spread of both facts and rumors combined.

As we debunked one false claim about the pandemic after the other, the effect of the infodemic that we’ve experienced became clear: it was ultimately the creation of fear, confusion, and distrust in authorities.

Almost 11 months later since we published that first fact check, about 94 fact-checking organizations worldwide have published over 9,464 articles debunking false and misleading claims. These range from anything about the virus and the disease it causes to the policies that different countries implemented to curb its spread. (READ: Fact checkers worldwide team up to debunk false info about 2019-nCoV)

“It grew organically,” said Jules Darmanin, former project coordinator of the IFCN, at the Global Fact 7 conference on June 23. Back then, there were already over 6,000 false claims debunked by the global fact-checking alliance.

False claims spiked in March globally, with 2,431 fact checks published worldwide. Like the first fact check Rappler published, many of the first claims that circulated were about false confirmed cases in certain places.

This changed, though, toward the second half of the year. As Darmanin put it, the first phase was mostly misinformation from well-meaning people – which was why the conversations then were riddled with warnings about places with false confirmed cases and false cures or home remedies as a treatment for COVID-19.

“The first phase came from anxiety, the second stand from distrust,” Darmanin said.

Starting in May, we saw a lot of conspiracy theories about the disease thrive. Bill Gates became more popular and was branded as the creator of the disease. There were a lot of attempts to discredit the World Health Organization and false claims about the harm caused by masks and vaccines cropped up around this time.

Apart from these, there were also a number of false information that were attributed to authorities, in the attempt to cloud their credibility and create public distrust. In the Philippines, this seemed to be the trend.

Globally, the top 3 themes of the falsehoods during the pandemic were about:

In contrast, the false attribution of statements to public figures was the 2nd most common theme in the Philippines. Rappler alone debunked at least 18 claims that used fake quote cards during the pandemic.

But this also doesn’t mean that authorities did not lie. A total of 186 false and misleading claims about COVID-19 were made by authorities worldwide since January, with US President Donald Trump leading the list. President Rodrigo Duterte also has had his fair share of false statements.

The Philippines is the 7th country in the world where the highest number of falsehoods spread. In Asia, we rank first.

A total of 334 fact checks about claims that circulated in the country were published from January to November 2020. Close to half of these (166) were published by Rappler.

Falsehoods spread the most in India, followed by the United States, Brazil, Spain, Colombia, and France. As of Tuesday, December 22, these countries are among the 12 nations with the highest coronavirus cases in the world.

Looking back at the data this past year, perhaps it’s time we take the next steps in fighting the infodemic problem in the country – which appears to be graver than those in other countries that recorded more COVID-19 cases than us.

Debunking falsehoods is a good first step, but maybe the next should be focused on transferring what we know to other potential crises that we could expect. – with reports from Denise Galias, Christine Okubo, Pia Rodrigo, and Aleijn Reintegrado/Rappler.com