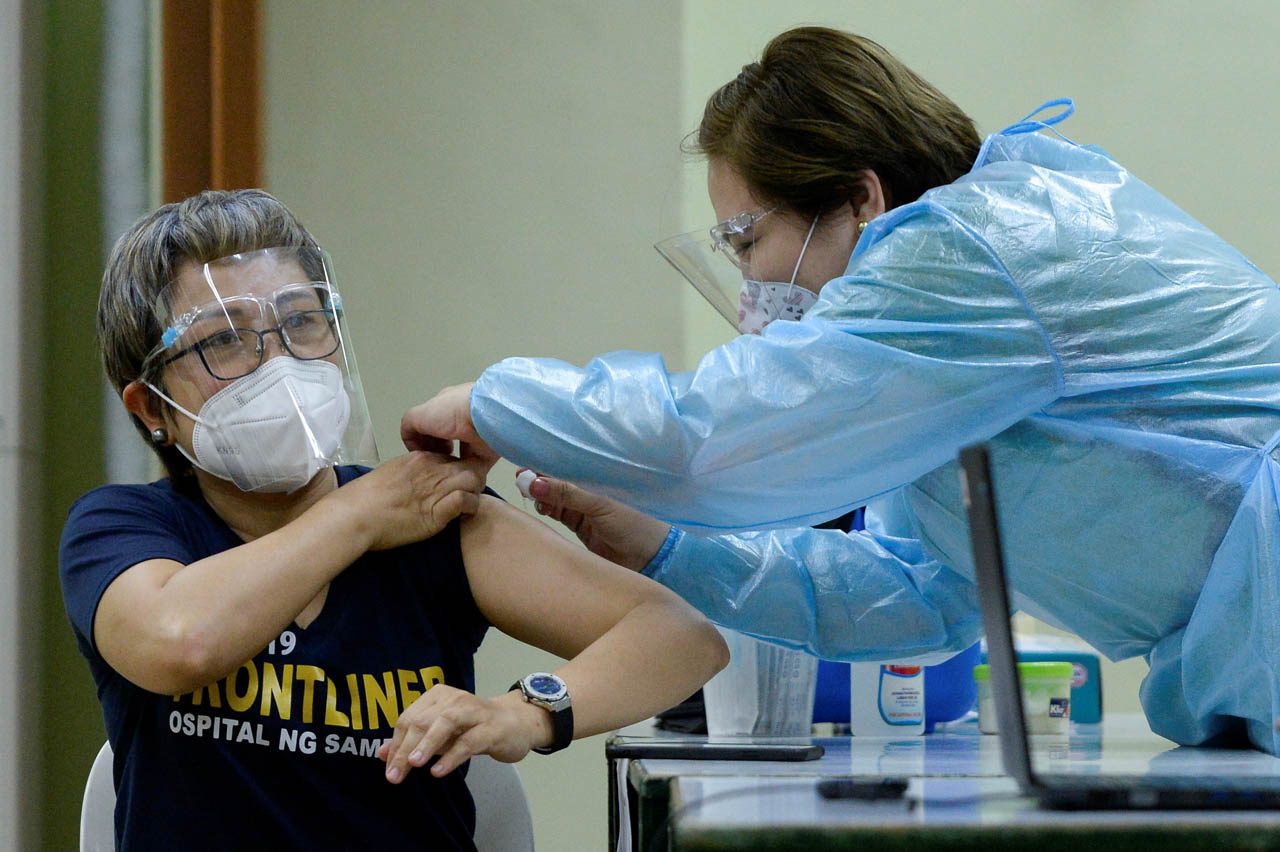 PRACTICE. A health worker conducts mock vaccination during a simulation exercise for the COVID-19 vaccination activities at the Universidad de Manila on January 19, 2021.

Local officials opened 2021 with policy announcements that spelled out their top agenda for the year: securing and distributing COVID-19 vaccines to their communities.

From cities hit hardest by the spread of the disease, mayors across the country launched registration sites and allocated millions of pesos to ensure their residents would receive vaccines for free.

But except for a few cities that initiated talks with pharmaceutical companies and only involved the national government when negotiations progressed, most local government units (LGUs) were awaiting clear guidance on how they could secure vaccine deals or what their responsibilities would be.

The Duterte government, through vaccine czar Carlito Galvez Jr, had only said LGUs were given the clearance to secure deals with vaccine companies, with the oversight of the national government.

Since the announcement of several LGU-led deals early in January, the Duterte government slowly outlined detailed procedures that local governments could follow when entering into tripartite vaccine deals.

Tripartite is the format

With limited funds to procure COVID-19 vaccines, the Duterte government has identified tripartite deals as one way the country can increase its orders for vaccines and secure doses for more Filipinos.

The parties involved in tripartite vaccine agreements are the vaccine manufacturers, the national government, and either local government units or the private sector.

The first tripartite deal entered into by the national government, in November 2020, involved AstraZeneca and a number of private groups which pooled together nearly P700 million for the purchase of about 2.5 million doses.

Before the tripartite agreement with AstraZeneca was signed, the national government had no framework to follow and which it could share with LGUs. The November 2020 agreement served as the basis for similar deals entered into by more private firms and later set the foundation for LGUs’ negotiation with vaccine firms.

As more local officials sought clearance to negotiate with pharmaceutical firms, President Rodrigo Duterte finally gave a blanket approval for LGUs to choose their suppliers and enter into tripartite deals.

Despite this go signal, not all LGUs will have the funds needed to buy pricey vaccines.

Galvez said the national government would still be responsible for ensuring that second- or third-class municipalities would receive vaccines for their communities, along with prioritizing distribution across the country.

At the Senate’s recent hearings on vaccines, Galvez detailed a process that interested LGUs could follow when ordering vaccines:

According to Undersecretary Epimaco Densing, the Department of the Interior and Local Government (DILG) was considering limiting the number of vaccines an LGU may procure to up to 50% of their population only.

He told lawmakers at the House of Representatives that the cap would be placed to ensure LGUs did not spend all their funds on COVID-19 vaccines as resources were still needed for other pandemic or emergency response measures.

Galvez said the national government would take care of supplying the remaining doses for LGUs to ensure herd immunity would be reached in the different localities. Scientists currently estimate about 60% to 70% of a population needs to be vaccinated against COVID-19 to reach herd immunity.

For this subsidy for LGUs, the national government will source doses from those it has secured through direct purchase agreements or from quantities donated by the private sector. What the LGUs need to do

In the case of deals with AstraZeneca – which has so far been the only vaccine company involved in deals – the obligations are the following:

Galvez said only AstraZeneca, Moderna, and Novavax so far were willing to enter into tripartite agreements. Discussions on adopting this setup is ongoing with Pfizer, Johnson & Johnson, Gamaleya, and Sinovac.

Galvez said all doses ordered by local officials will be transferred to their respective LGUs, unlike deals entered into by the private sector, which required them to donate doses to the national government. In the case of LGUs, the national government will only handle receiving these vaccines from manufacturers once they arrive in the Philippines. The LGU’s role in the national government’s rollout

Outside of obligations attached to deals, LGUs have a set of responsibilities under the Duterte government’s COVID-19 vaccine distribution plan. They include cold storage preparations, listing of individuals in priority populations, and mapping of vaccination sites.

In a memorandum issued on January 19, the DILG listed specific tasks:

The DILG said, if LGUs fail to comply, they may face administrative complaints or delays in receiving vaccines from the national government.