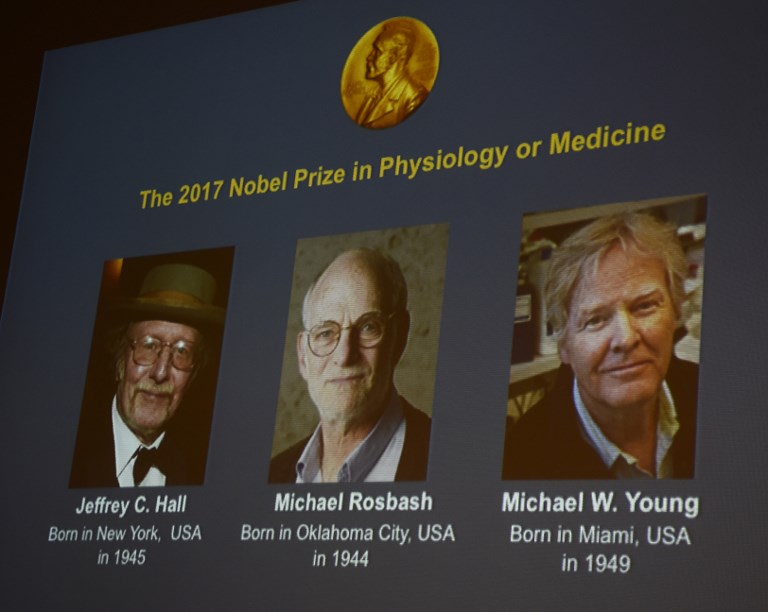 The team’s work revealed the role of genes in setting the “circadian clock” which regulates sleep and eating patterns, hormones and body temperature, the Nobel Assembly said.

“Their discoveries explain how plants, animals and humans adapt their biological rhythm so that it is synchronized with the Earth’s revolutions.”

All life on Earth is tuned to the rotation of our planet. Scientists have long known that living organisms, including humans, have an internal timekeeper that helps them anticipate and adapt to the rhythm of the day.

Hall, 72, Rosbash, 73, and Young, 68, “were able to peek inside our biological clock and elucidate its inner workings,” the Nobel jury said.

They identified genes that regulate the clock, and the mechanism by which light can synchronize it.

Rosbash told Swedish Radio he was rattled when the committee’s call woke him from his sleep at 5:10 am.

“I was called on the landline next to my bed which never rings unless someone has died or something of this magnitude happens,” he recounted. “I was restless, both literally and figuratively. My wife said: ‘Please start to breathe’.”

The circadian clock is what causes jetlag – which happens when our internal clock and external environment move out of sync as we change time zones.

It also regulates sleep, which is critical for normal brain function. Circadian dysfunction has been linked to depression, bipolar disorder, cognitive function, memory formation and some neurological diseases.

Studies have indicated that a chronic misalignment between our lifestyle and circadian clock – irregular shift work for example – may be associated with an increased risk for cancer, neurodegenerative diseases, metabolic disorders and inflammation.

Scientists are working hard on methods to alter the rhythm of errant clocks as a means to “improve human health,” said the Nobel team.

Using the fruit fly as a model organism, this year’s laureates isolated a gene that controls the daily biological rhythm, called the period gene.

“They showed that this gene encodes a protein that accumulates in the cell during the night and is then degraded during the day,” the Nobel team said.

“Subsequently they identified additional protein components of this machinery, exposing the mechanism governing the self-sustaining clockwork inside the cell.”

“Just about every facet of our body changes predictably over the course of the day and night and these changes are driven by this internal timing mechanism,” Michael Hastings of the Medical Research Council Laboratory of Molecular Biology in Cambridge told AFP.

Rosbash, born in 1944 in Kansas City to migrants who had fled Nazi Germany, received his doctoral degree in 1970 at the Massachusetts Institute of Technology, and has since 1974 been on faculty at Brandeis University.

Young received his doctoral degree at the University of Texas in Austin in 1975, and has been on faculty at the Rockefeller University in New York since 1978.

Meanwhile, Hall originally planned to attend medical school when he entered Amherst College in Massachusetts in 1963, but halfway through his bachelor’s degree his curiosity for medicine was replaced by one for basic science.

He went on to earn his doctoral degree in 1971 at the University of Washington, before joining Brandeis University in 1974. He is now retired.

On Tuesday, the physics prize laureates will be revealed, followed by those for chemistry on Wednesday.

The literature prize will be announced on Thursday, the peace prize on Friday, and the economics prize will wrap things up on Monday, October 9.

For literature, the Swedish Academy is expected to turn the page on last year’s surprise choice of US singer songwriter Bob Dylan, which divided the literary world.

This year it is expected to go for a more conservative pick, such as Italy’s Claudio Magris, Kenya’s Ngugi wa Thiong’o, Canadian author Margaret Atwood, Syrian poet Adonis, Philip Roth and Don DeLillo of the US, Israel’s Amos Oz and Haruki Murakami of Japan.

As for the peace prize, a total of 318 nominations have been submitted this year to succeed last year’s winner Colombian President Juan Manuel Santos.

Anti-nuclear efforts could be honoured, some have suggested. Tensions have escalated between Washington and Pyongyang after North Korea’s sixth nuclear test, and there is growing uncertainty over the Iran deal, which US President Donald Trump has threatened to tear up.