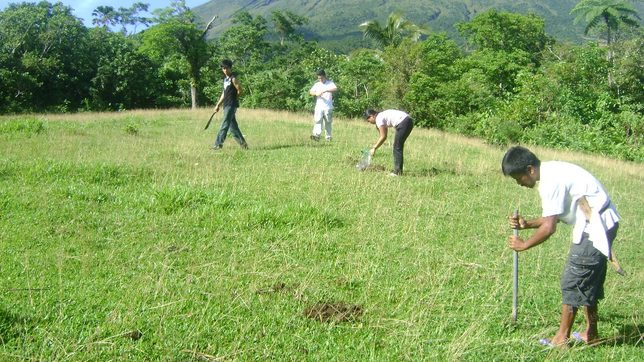 FINDING MICROBES. With the slope of the majestic Mt. Mayon behind them, the authors take soil samples from the active volcano in Malilipot, Albay.

Volcanoes are regarded as among the planet’s most powerful forces.

Take a look at Mayon in the province of Albay, one of the most active volcanoes in the Philippines. The majesty of Mayon’s almost perfect cone shape seems like an irony to the destruction it can cause once it erupts.

But the same destructive volcanic eruption leaves the environment teeming with nutrients that feeds the volcanic ecosystem. In fact, a team of Filipino researchers found a thriving community of microbes in the soils of Mayon. Among the bacteria the team found potentially have antibiotic and anti-cancer properties.

“The volcano is an interesting environment for us microbiologists since Mt. Mayon is an active volcano. Before we took samples, a year or two before that, it erupted. That’s why it caught our attention. We might encounter a new species, or probably those microbes thriving in that environment can be really unique and special,” said Kristel Oliveros, assistant professor at the University of the Philippines Los Baños’ Microbiology Division.

Oliveros, the project leader of the study, hails from Sorsogon. She was initially interested in contributing to the body of knowledge surrounding the Bicol region.

(Mt. Mayon has high nutrient input as every time it erupts, it emits pyroclastic materials from the soil. Those nutrients are being used by the bacteria.)

Rosana added that because the volcano is rich in sulfur, it has the potential to host unique bacteria which can metabolize or subsist sulfuric compounds.

“We can consider it as an extreme environment that’s why Mayon has extreme bacteria, which apparently Kristel isolated,” Rosana said.

OIiveros and her team initially isolated 30 bacterial species from a composite sample of Mt. Mayon’s volcanic soils at different elevations. One of the species they found is currently known as Streptomyces sp. A1-08.

Through genomic sequencing, the process of figuring out the order of the DNA bases of an organism, the team tried to match the bacteria species in the database to check if it is a new species.

(If you discover a novel species, the next step is to find out what it is capable of doing…. And if it is also unique, that would lead us into another phase of study, eventually drug discovery later in the pipeline.)

In general, Streptomyces species are known to produce medically and pharmaceutically important products. But this particular bacteria species the team isolated, Streptomyces sp. A1-08, stood out as it was able to fight all test microorganisms, including the methicillin-resistant Staphylococcus aureus (MRSA).

This paper was recently accepted in the Philippine Journal of Science (PJS), a peer-reviewed publication of the Department of Science and Technology. Although the paper is lined up on the PJS‘s December 2021 issue, its full copy will be uploaded immediately on the journal’s website as soon as it’s ready for public reading.

The scientists consider their discovery monumental, but they are aware that they shouldn’t stop there. Their study is only the first step in the long process of potentially discovering a new drug.

“This is beyond finding a needle in a haystack. Because a haystack is way smaller than the Mayon, considering that Kristel and the team climbed the volcano at 500, 1,000, 1,500 meters above sea level (Mayon is around 2,400 meters above see level),” said Rosana.

(If we eventually find that the compound we have is also novel, we’ll push through the pipeline for drug discovery research. Our team’s wildest dream is to produce a medicine where this compound could be found effective. However, we are aware that this is a long process. It’s not an overnight thing.)

Oliveros believes that their study proves that it is also important to look at the research of budding scientists. This discovery started as a master’s thesis in 2013.

The researchers also hope that their study will inspire a generation of young researchers to explore the treasure trove that is Philippine natural resources.

(The Philippines is a megadiverse biodiversity hotspot, we have the highest biodiversity status in the world. It is worth noting that because the Philippines is an archipelago, the forces governing the evolution of species in the Philippines, there is a higher chance that these are endemic to the country. So, if we lose the chance to discover new bacteria species because of environmental destruction, that’s a lost opportunity.)

“I consider it as a pioneering work. Maraming bulkan sa Pilipinas, maraming kweba, maraming isla, these are untapped environments with great potential. But more than exploiting them or probing them, we need to protect them para magkaroon ng pagkakataon ang mga batang researchers to explore them,” he added.

(I consider it as a pioneering work. The Philippines has a lot of volcanoes, caves, and islands. These are untapped environments with great potential. But more than exploiting them or probing them, we need to protect them to give chance to younger researchers to explore them.) – Rappler.com