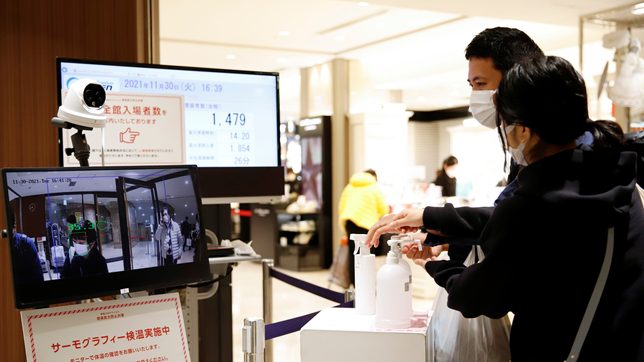 OMICRON. People disinfect their hands while a thermal camera reads their temperature, at the entrance of a department store, on the first day of Japan's closed borders to prevent the spread of the Omicron variant of coronavirus, in Tokyo, Japan, on November 30, 2021.

The Omicron variant, spreading now in southern Africa and detected in over 30 other countries, has prompted fears it could significantly undermine the effectiveness of vaccines against COVID-19.

Yet as scientists race to understand the full consequences of Omicron, some are also asking whether this new version of coronavirus might cause milder illness than its predecessors. While they caution that it is far too early to draw conclusions, here is what is known so far:

What do the data show?

Evidence from initial cases of the new variant is limited.

Among 70 cases reported in Europe that included information on disease severity, half of the patients had no symptoms and half had mild symptoms, according to a report on Thursday, December 2, by the European Centre for Disease Prevention and Control.

There were no cases of severe disease, hospitalization, or death. However, the European agency said it would require data on hundreds of cases to accurately assess disease complications, estimating that could take several weeks. In addition, most cases detected in Europe so far have been in younger people who were fully vaccinated, making them less likely to suffer severe illness.

In South Africa, where the daily number of reported COVID-19 cases doubled on Wednesday, December 1, to 8,561, symptoms for reinfected patients and those infected after vaccination appear to be mild.

“Some evidence from South Africa suggests that it may actually cause more mild illness but … I caution you that a lot of the patients South Africa initially were among young university students,” Dr. Carlos Del Rio, an infectious diseases expert at Emory University in Atlanta, said on Thursday during an online briefing from the Infectious Diseases Society of America.

Is Omicron a ‘less fit’ version of coronavirus?

While data on real world infections continues to emerge, scientists are conducting laboratory studies to decipher Omicron. The variant has about 50 mutations not seen in combination before, including more than 30 mutations on the spike protein the coronavirus uses to attach to human cells. Vaccines in current use target that spike protein.

“Typically when viruses accumulate a lot of mutations they lose some fitness,” said Dr. John Wherry, director of the Penn Institute for Immunology in Philadelphia. Certain Omicron mutations may impair the ability of the virus to cleave, changing the behavior of the spike protein, he said.

Some scientists have theorized Omicron may have developed over a period of months in an immunocompromised individual, such as an HIV patient in southern Africa. If so, “the virus adapted not to kill that host,” Wherry said.

There are competing theories that the latest variant evolved from an animal host.

Will Omicron become the dominant variant?

The other central question surrounding Omicron is whether it will overtake the Delta variant, which still accounts for the overwhelming majority of known infections worldwide. If Omicron does become dominant, but causes milder illness, it could mark a turning point toward the virus eventually becoming a seasonal threat, like influenza, said Sumit Chanda, an infectious disease researcher at the Scripps Research Department of Immunology and Microbiology in San Diego.

The European Union’s public health agency said on Thursday the Omicron variant could be responsible for more than half of all COVID-19 infections in Europe within a few months.

While the research into Omicron is underway, disease experts say people must remain vigilant against the coronavirus by getting either initial vaccinations or booster shots, as well as wearing masks in indoor or crowded settings, ventilating rooms and washing hands. – Rappler.com