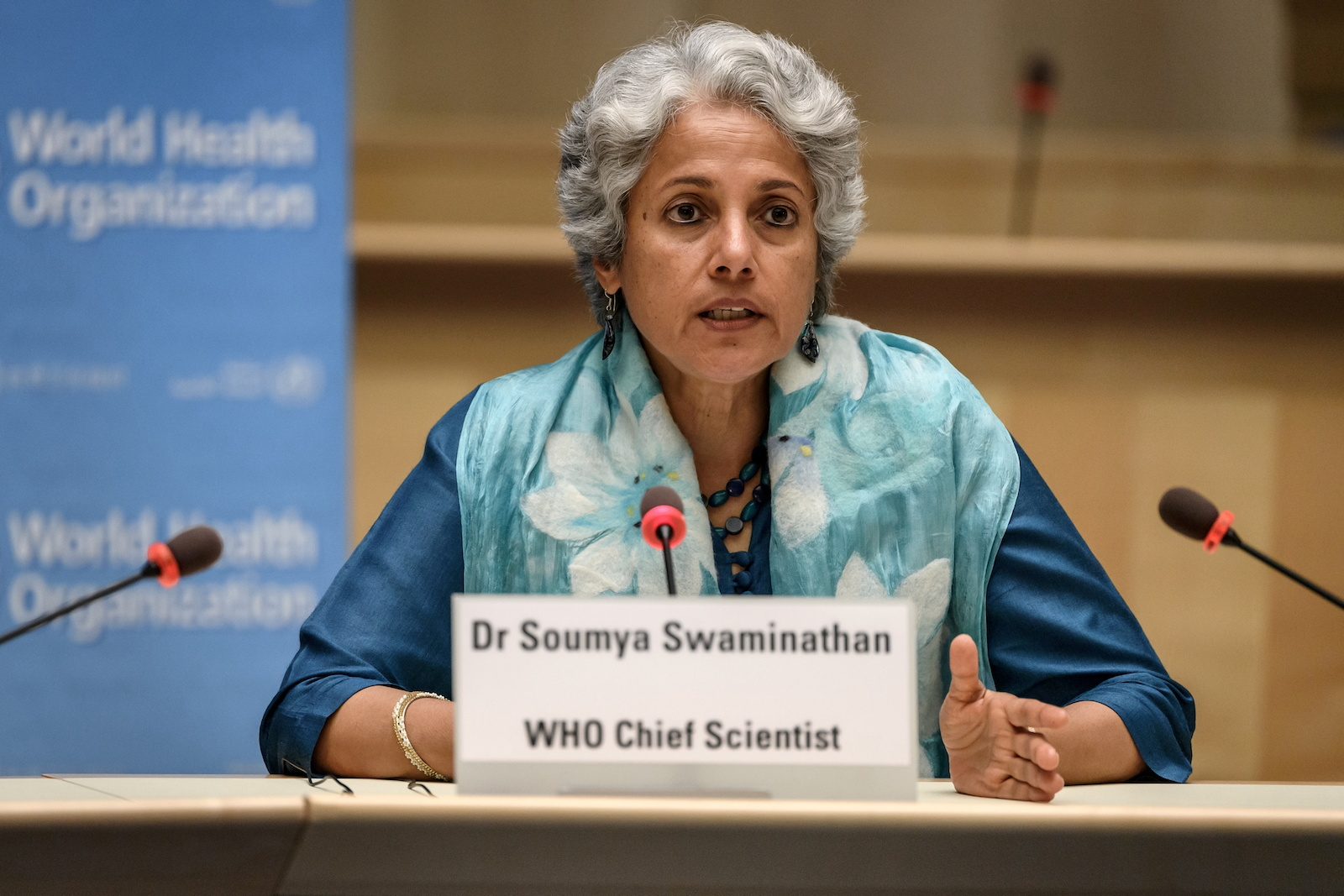 FILE PHOTO: World Health Organization (WHO) Chief Scientist Soumya Swaminathan attends a press conference organized by the Geneva Association of United Nations Correspondents (ACANU) amid the COVID-19 outbreak, caused by the novel coronavirus, at the WHO headquarters in Geneva Switzerland July 3, 2020.

Facebook Twitter Copy URL
Copied
'It is possible that it could become (the) dominant variant,' says the WHO chief scientist, adding that it is however impossible to predict. The Delta variant now accounts for 99% of infections globally, she says.

The World Health Organization’s chief scientist told the Reuters Next conference on Friday, December 3, the Omicron variant could become dominant because it is highly transmissible, but that a different vaccine may not be needed.

Soumya Swaminathan also said it was too early to say whether Omicron is milder than other variants of the coronavirus that causes COVID-19 and cast doubt over its origin, saying it was far from certain it emerged in southern Africa.

“It is possible that it could become (the) dominant variant,” Swaminathan said, adding that it was however impossible to predict. The Delta variant now accounts for 99% of infections globally, she said.

Scientists in the European Union and Australia are forecasting that Omicron may account for more infections than Delta within a few months.

She said Omicron “was highly transmissible” and cited data from South Africa showing the number of cases doubling daily.

“How worried should we be? We need to be prepared and cautious, not panic, because we’re in a different situation to a year ago,” Swaminathan said in an interview.

She said the WHO could not at this stage say that Omicron was a mild variant, even if many infections so far have been associated with less severe symptoms or no symptoms at all.

There is not yet conclusive evidence about Omicron’s impact on the effectiveness of antibodies.

“It does seem to be able to overcome some of the natural immunity from previous infection,” the world health body’s top scientist said, but added that vaccines did seem to be having an effect.

“The fact that they’re not getting sick … that means the vaccines are still providing protection and we would hope that they would continue to provide protection,” Swaminathan said.

Vaccine against all coronaviruses?

Swaminathan was cautious about the need to upgrade existing vaccines, noting that a booster of existing shots might be enough against Omicron.

A WHO technical advisory group is trying to work out if a new type of vaccine be needed against Omicron, she added.

Speaking to Reuters Next earlier in the day, BioNTech CEO Ugur Sahin said his company would be able to adapt its vaccine relatively quickly in response to Omicron and the next few weeks would show how urgently an upgrade was needed.

“I believe in principle at a certain timepoint we will need a new vaccine against this new variant,” Sahin said.

Asked about the need for annual vaccine boosters, Swaminathan said “the WHO is preparing for all scenarios”, which could include an additional dose, particularly among some age groups or vulnerable sections of the population.

But she added: “Natural infection acts as a booster.”

Swaminathan, a qualified pediatrician from India, raised doubts about the origin of the new variant, which was first detected in southern Africa, where the highest number of cases is also being recorded.

“Where did it originate? We don’t know,” she said noting it could have originated in countries which do not have enough genomic sequencing.

“We may never know.”

Flight bans by some countries targeting southern Africa were unfair, Swaminathan said, adding that the variant had been identified in South Africa “because of the excellent genomic sequencing and surveillance” there.

“We feel terrible that they have been punished for it.”

The WHO has said travel curbs can buy time but are not the way to fight the Omicron variant, urging countries to boost healthcare capacity and vaccinate their populations.

Swaminathan also urged more equity in the distribution of COVID-19 vaccines and tests.

Asked whether the Omicron variant may not have emerged if Africa had received and administered more vaccines, she said: “Absolutely.”

“There is a clear relationship between inequity in access to vaccines and the development of variants,” Swaminathan said. – Rappler.com