IN PHOTOS: All Philippine gold medal wins at 2015 SEA Games 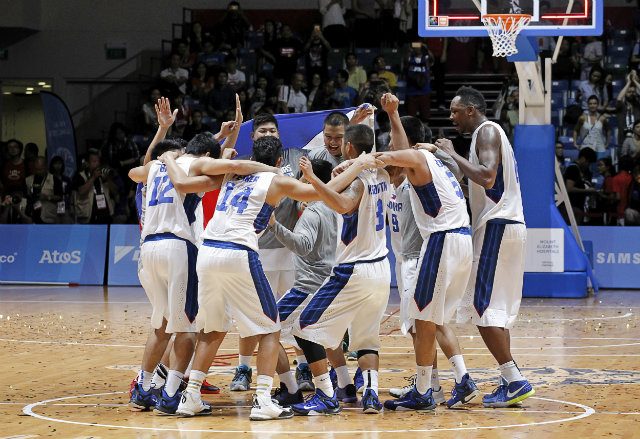 MANILA, Philippines (UPDATED) – The Philippines entered the 28th Southeast Asian Games in Singapore with a mission to surpass its 2013 tally of 101 medals – including 29 golds.

In their last competition, the Philippines equaled that tally as the Philippine men’s basketball team delivered the 29th gold medal with a competitive win over Indonesia on Monday, June 15.

The Philippines wrapped up the SEA Games also added 36 silvers and 66 bronzes in 131 total medals for a sixth place finish.

Relive the Philippines’ golden glory at the SEA Games in these photos.

The Philippine men’s basketball team had a lot of pressure on their back as the Philippines has finished short of a gold just once in basketball since 1977.

The Gilas Cadets, comprised of standouts from the UAAP, NCAA plus naturalized center Marcus Douthit, overcame tough challenges from Thailand and Indonesia in the semis and final respectively to earn the country its 17th gold medal in the event. Nikko Huelgas finished with a top time of 2:04:32, a day after the Philippines won the same event in the women’s category. Fellow Filipino Saim Jonard finished sixth, 5:46 behind the lead. Claire Adorna kicked it all off for the Philippines on Saturday, overcoming a torn right peroneal tendon on her left ankle to finish with a time of 2:13.08. Her only real competition came in the form of compatriot Kim Mangrobang, who bagged silver with a time of 2:14.26. Dennis Orcollo, known as “Robocop” for his mechanical efficiency on the pool table, came back from a 1-3 hole to Myanmar’s Maung Maung on Wednesday, June 10 to win the men’s 9-ball gold medal. Orcollo, 36, of Bislig, Surigao del Sur won his fourth SEA Games title in the process. Reyland Capellan finished with the highest score among 8 opponents, earning a 6.500 D tally, then followed it up with an E score of 8.233 for a total of 14.733 points to earn the gold medal for the Philippines. All 10 Philippine boxers entered in the tournament medaled, with Wilfredo Lopez and Riza Pasuit earning bronze in semifinals losses, and Nesthy Petecio, Rogen Ladon and Irish Magno losing in the finals for silver. Both the men’s and women’s softball teams each earned gold medals on Wednesday, June 10 in dominant fashion. The men’s team topped Thailand 8-1, while the women’s squad shut-out Indonesia 6-0. The Olongapo-born, Texas-based Eric Shaun Cray overcame a costume gaffe where his Philippine flag was pressed upside down to win two gold medals in Singapore. Cray topped the men’s 100-m event with a time of 10.25 seconds, then won the men’s 400-meter hurdles with a record-breaking 49.40 seconds mark. The 17-year-old Richardson, a resident of Walnut, California whose mother hails from Zamboanga, tied with Thailand’s Tassaporn Wannakit with 11.76 second finishes but came away with first place due to a superior reaction time of 0.216 to 0.174 to win gold on Tuesday, June 9. Despite fouling on his first try, Caleb Stuart captured the gold on his third attempt with a heave of 65.63 meters to shatter the old meet record of 62.23 held by dethroned Thai champion Tanti Pet Chaiya, who could only muster 62.18 this time and had to settle for silver. The former Far Eastern University runner Ulboc stepped on the gas and surged past erstwhile Vietnamese frontrunner Tien San Pham in the last 200 meters to secure the gold medal in a personal best of eight minutes, 59.07 seconds.

Ulboc had previously won gold at the 2013 SEA Games as well. The Philippines retained their gold medal in the tennis mixed doubles competition as Treat Huey and Denise Dy took down Sonchat Ratiwatana and Peangtarn Plipuech of Thailand at the Kallang Tennis Centre in Singapore on Sunday, June 14.

Dy and Huey won a close first set, 7-6, and then won the second set, 6-4, to retain their championship. The two won the same competition of the Southeast Asian Games in 2011 in Myanmar. Marella Salamat, a former promising bowler, had an amazing SEA Games debut in capturing the women’s individual time trial in runaway fashion in a time of 44 minutes and 46.38 seconds over the 30-kilometer in and around the Marina Bay area on Thursday, June 11. After winning silver at the 2013 Games, the PH men’s sailing team set their sails for gold, striking pay dirt on the Marina Bay on Sunday, June 14. The gold win was the Philippines’ first at the SEA Games since they hosted the biennial event in 2005. The 25-year-old Far Eastern University product overcame Trung Duc Phan, 19-12, in the men’s under 56kg final to win gold on Sunday, June 15. He had previously won bronze at the 2014 Asian Games. The team of Dustin Mella, Raphael Mella and Rodolfo Reyes Jr. celebrated Philippine Independence Day on Friday, June 12 by earning top honors in the men’s team poomsae event with a score of 7.850.