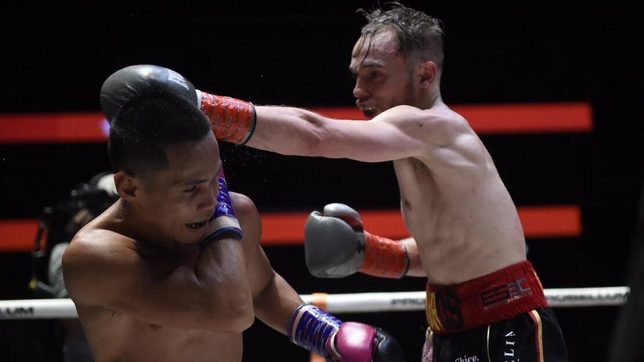 Unable to solve Edwards’ jabs and overall skills, Mama lost in all the scorecards, 118-109, 118-109, 117-110, and completed the misfortunes that struck the three Filipinos in Probellum’s initial fight card presentation.

Donnie Nietes did enough to win but the judges were not entirely convinced and the four-division world champion had to be content with a split draw against Norbelto Jimenez of the Dominican Republic in their super flyweight eliminator.

Johnriel Casimero, on the other hand, is in danger of losing his World Boxing Organization bantamweight crown after pulling out of the main event against Paul Butler allegedly due to a bout with viral gastritis on Thursday night.

The WBO ordered Casimero to show medical proof within 10 days, otherwise, the title would be declared vacant.

This developed after Butler refused to tangle with substitute fighter Joseph Agbeko for the interim title. Not known for his power, Edwards even scored a knockdown in the 10th with a straight left followed by a right that put Mama off-balanced rather than hurt.

The referee, however, credited Edwards with a knockdown as the punch landed on Mama’s left ear and not on the head.

Edwards stretched his winning run to 17 with 4 knockouts while Mama tasted his first defeat after 16 victories laced with 9 knockouts.

Against Edwards, however, Mama couldn’t land the lethal bombs and had to return to General Santos City without the crown he’s been longing for.