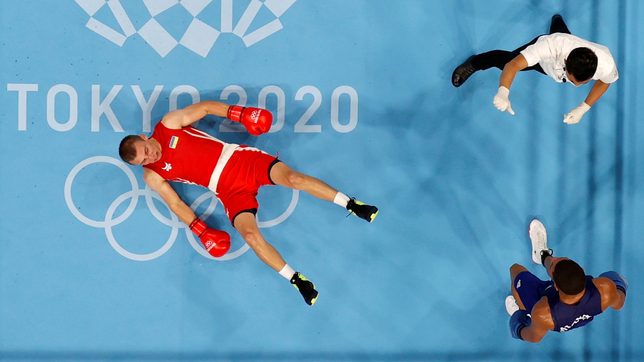 POWER. Ukrainian Oleksandr Khyzhniak lies on the canvas after getting knocked down by Brazilian Hebert Sousa in the middleweight final.

Unheralded Brazilian Hebert Sousa won the Olympic middleweight boxing gold on Saturday, August 7, with a stunning third-round knockout of Ukrainian Oleksandr Khyzhniak, turning around a fight he had all but lost, to win Brazil’s second-ever Games gold in the sport.

Khyzhniak had the edge in the fight with quick and big punches but Sousa, who has no championship titles to his name, fought hard to stay in the match, and from nowhere, unleashed a fierce left that sent his opponent to the floor.

“I got lucky, I connected and it was a knockout,” said Sousa.

“I don’t have that many knockouts, but I train for it a lot.”

Sousa immediately burst into wild celebration, falling to his knees and screaming out into the arena as a shaken Khyzhniak got back on his feet, staggering, and demanded the fight continue as the Brazilian team rejoiced.

Khyzhniak  who has not lost in over five years, defeated Filipino bet Eumir Marcial in a close 3-2 split decision in the semifinal.

But Sousa pulled off the major upset to stop Khyzhniak’s mind-boggling winning streak at 62.

“I didn’t understand the decision,” said Khyzhniak, adding the punch was not that hard.

“It’s not that I could have continued – I did continue. I got up right away but it was stopped.” – Rappler.com