Pacquiao ‘excited’ to rumble with Ugas, heads to Vegas 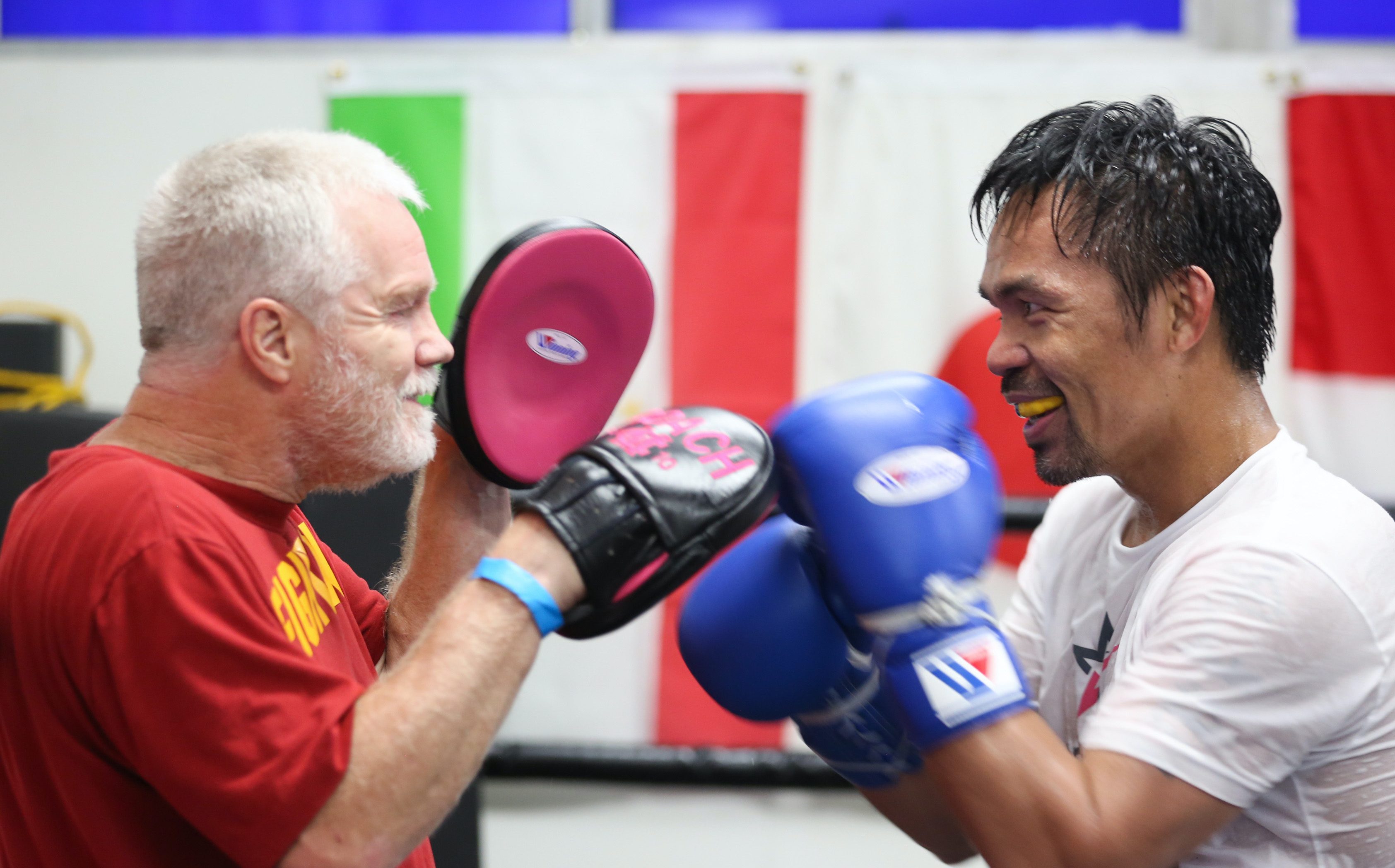 GROUNDED. Manny Pacquiao and his camp are not taking Yordenis Ugas lightly.

Facebook Twitter Copy URL
Copied
Manny Pacquiao looks to prevent Yordenis Ugas from accomplishing what he achieved 20 years ago, when he rose to prominence by beating Lehlo Ledwaba as a replacement foe

Manny Pacquiao knows what Yordenis Ugas is going through. He was in the same position 20 years ago. What happened then, however, Pacquiao cannot allow now.

On Saturday, August 21 (Sunday, August 22, Manila time), Pacquiao wants to regain the “super” welterweight crown stripped away from him by the World Boxing Association and handed over to Ugas.

It was the same feeling Pacquiao had on June 23, 2001, when as a late substitute he knocked out South African great Lehlo Ledwaba to clinch the International Boxing Federation junior featherweight title and begin his ascension to universal fame.

The 35-year-old Ugas got the coveted chance to tangle with Pacquiao when original opponent Errol Spence Jr. sustained a retinal tear on his left eye and backed out.

Ugas was scheduled to fight Fabian Maidana in the same card, but the Argentine also suffered an injury and withdrew likewise.

It was the same situation in 2001 when Ledwaba’s title defense was jeopardized after Enrique Sanchez got injured two weeks before the bout.

Nobody dared to fill in but Pacquiao, then the IBF No. 3, and his new trainer Freddie Roach readily accepted.

“I was in very good shape since I had recently fought in the Philippines and had just begun to work with Freddie,” said Pacquiao, who closes his training camp at Wild Card Boxing Club here Monday afternoon, August 16, before proceeding to Las Vegas, where the pay-per-view bout will be held at T-Mobile Arena.

“I was a day away from going home to the Philippines when the [Ledwaba] fight was offered to me. I was so excited. This was a great opportunity. There was no way I was going to pass it up. Freddie and I worked every day those two weeks until the weigh-in. That is how we started to get to know each other,” Pacquiao continued.

“Ugas is in a similar situation. He was already training for a welterweight title fight on the same card as mine so he too is ready to make the most of this opportunity. I know what Ugas is feeling because 20 years ago I was Ugas.”

The similarity ends there.

Pacquiao put Ledwaba, who was staking the title for the seventh time, down thrice before finally knocking him out in the sixth round.

No wonder, Pacquiao is taking Ugas as seriously as he did the unbeaten Spence, considered one of the world’s best pound-for-pound fighters.

“I will not make the same mistake Ledwaba made with me. I still have the same hunger to win. I live for it.”

Still, Pacquiao could not help but rue the amount of time and sweat he spent in training for Spence, who is a lefty like him.

“Sinayang niya ang training ko (He wasted my training),” said Pacquiao, who has whipped himself into optimum form under the guidance of Roach, Filipino trainer Buboy Fernandez, and conditioning coach Justin Fortune.

“What Manny had going for him when he fought Ledwaba was that he was unknown in the US which gave us the element of surprise,” said Roach. “I don’t remember Sanchez being considered too tough an opponent and I guess Ledwaba trained for that level of opponent. They obviously didn’t do their homework on Manny, which was lucky for us.”

“The important lessons Manny and I learned from that fight were never underestimate your opponent, take nothing for granted, and never cut corners in training. And Manny never has. He gives it everything he has every day of every training camp and respects every opponent who is brave enough to enter a ring.”

Despite the little time to adjust, the eight-division world champion believes he is well prepared and equipped to hurdle the challenge of Ugas, who is 26-4 with 13 knockouts.

“I want to prove to everyone, especially Yordenis Ugas, that I am still here.  My title was given to Ugas. That is not how you become a champion. You earn it by winning it inside the ring. We will fight for the title. That is the proper way a champion is crowned.”

Pacquiao is ready to reclaim what he believes is rightfully his. – Rappler.com