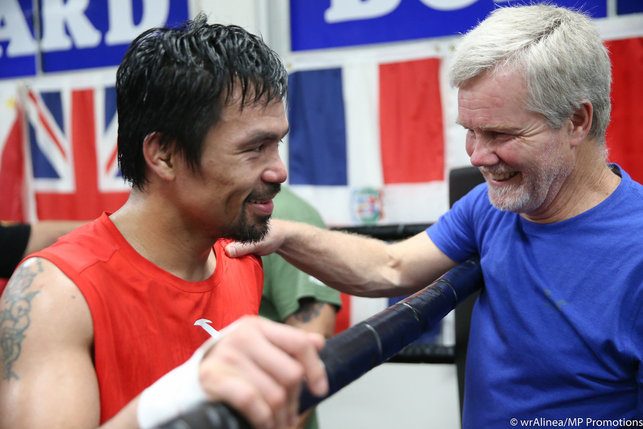 After studying tapes of  Spence’s fights, however, Roach now thinks Pacquiao made the right choice in picking the unbeaten American champion to be his opponent on Saturday, August 21 (Sunday, August 22, Philippine time) at T-Mobile Arena in Las Vegas.

“I think it’s the right fight for him now,” Roach told BoxingScene. “I think his last opponent [Keith Thurman] is actually better than Spence. I’ve been studying [Spence’s] tapes and so forth and going through what he does well and what he doesn’t do well. And I think it’s a good fight for Manny. I like the fight a lot. And I like that it’s a competitive fight.”

According to Roach, Thurman, beaten by Pacquiao in their battle for the World Boxing Association super welterweight belt on July 20, 2019, throws more combinations and is a little stronger than Spence.

And with the newfound intensity and dedication the eight-division world champion has been showing in training in Los Angeles, Roach is optimistic boxing’s living legend will soon become immortal.

“Manny has achieved so much in his boxing career and in his life. But everyone in camp can sense this fight has a special meaning,” Roach told boxingjunkie.usatoday.

“It is not just about beating a top pound-for-pound fighter or winning more titles. This time it’s all about boxing immortality for Manny Pacquiao.”

At 42 years old and inactive for two years, Pacquiao would not have been faulted if he avoided a confrontation with the prime Spence or Terence Crawford, the unscathed World Boxing Organization champion, for a lower-risk opponent.

Spence has committed a grave sin when he looked past Pacquiao during the buildup for the pay-per-view blockbuster bout and vowed to retire him.

Pacquiao would only hang up his gloves when he wants to. – Rappler.com