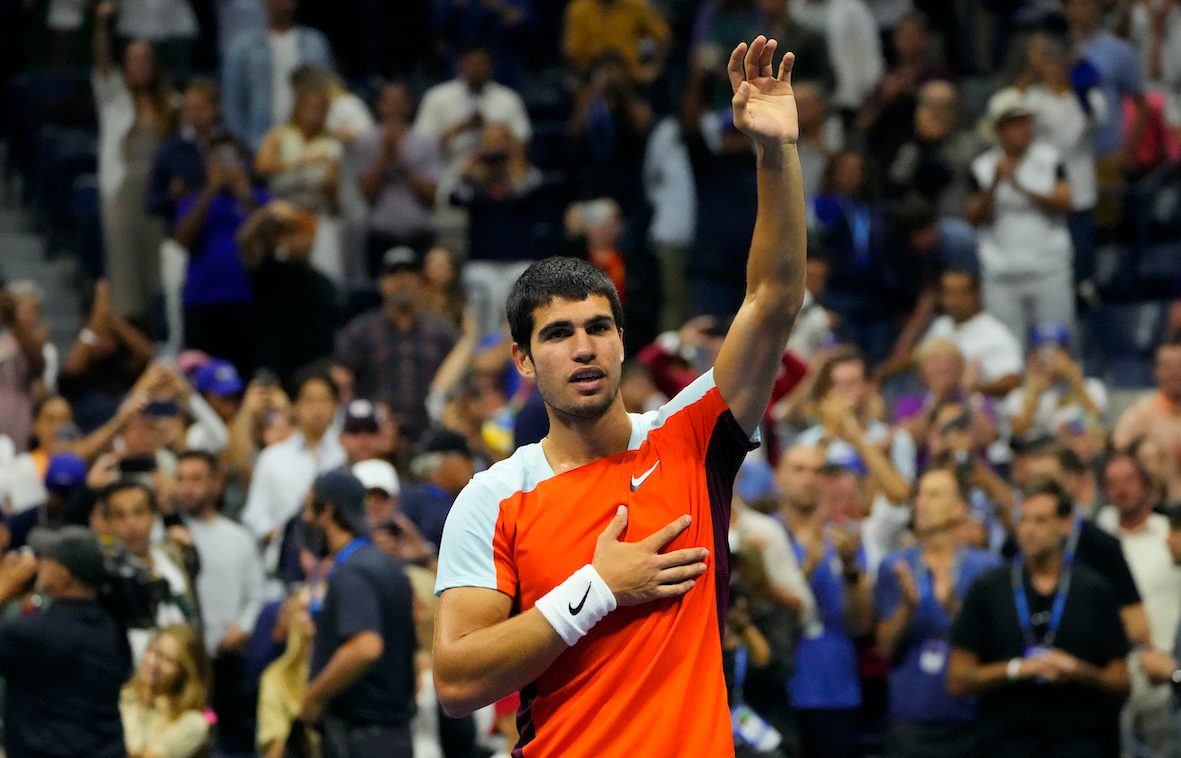 DREAM COME TRUE. Carlos Alcaraz says winning a Grand Slam is something he dreamed of as a kid.

Facebook Twitter Copy URL
Copied
Spain's Carlos Alcaraz, 19, becomes the youngest world No. 1 since the ATP rankings began in 1973 after trouncing Norway's Casper Ruud in the US Open final

NEW YORK, USA – Spanish teenager Carlos Alcaraz completed his rapid rise to the top of the tennis world on Sunday, September 11, claiming his first Grand Slam title and taking the No. 1 ranking with a 6-4, 2-6, 7-6 (1), 6-3 win over Norway’s Casper Ruud in the US Open final.

Alcaraz, 19, fell to his back and cupped his hands to his face before jumping up to embrace Ruud at the net. He then climbed past photographers and into the stands to celebrate in his box with his team.

“This is something I dreamed of since I was a kid, to be No. 1 in the world, to be the champion at a Grand Slam,” Alcaraz said in an on-court interview.

“All the hard work that I did with my team, with my family. I’m just 19 years old so all of the tough decisions are with my parents and my team as well.”

“This is something that is really, really special for me.”

“Bravo Carlitos!” was displayed on a banner inside the stadium for the tennis prodigy from El Palmar.

The electrifying Alcaraz, who thrilled fans over the two-week tournament in New York with his explosive speed, booming forehand, and acrobatic shotmaking, replaced Russian Daniil Medvedev at the top of the rankings.

Alcaraz had a difficult path to the title.

He battled from a break down in the fifth set to beat Marin Cilic in the fourth round, played the latest finishing match in tournament history to defeat Italy’s Jannik Sinner in the quarters, and faced down American Frances Tiafoe in the semis.

“I always say that there is no time to be tired in the final round of a Grand Slam or any tournament,” said Alcaraz, who spent 23 hours and 40 minutes on court over his seven matches.

“You have to give everything you have inside.”

Rafa Nadal, the winner of men’s record 22 Grand Slam titles, took to Twitter to offer his congratulations to his countryman and predicted more success was on the way.

Ruud was trying to become the first Norwegian to capture the top spot but was unable to match Alcaraz’s firepower under the closed roof at Arthur Ashe Stadium.

French Open finalist Ruud will rise to second in the world from No. 7.

Sunday’s final was the first featuring two men competing for both their first Grand Slam title and the world No. 1 ranking.

“Number two is not too bad either. I will continue to chase for my first Grand Slam and the No. 1 world ranking.”

Fan favorite Alcaraz rode an early break to take the first set but his serve began to falter in the second and Ruud found the range with his forehand to level the contest.

The Norwegian did not have the momentum for long as Alcaraz broke in the first game of the third with a deft drop shot, but Ruud responded again, saving a break point on his serve and breaking back on a backhand error by Alcaraz for 2-2.

Alcaraz saved two set points in the final game of the third set and fans jumped from their seats when he smashed an overhead to force a tiebreak.

Ruud, who had been solid in the second and third sets, blinked in the tiebreak, shanking a couple shots and struggling to make returns as Alcaraz reeled off 7 straight points to move a set away from the trophy.

Alcaraz, who bellowed “Vamos!” and pumped his fist after big points, continued to crush forehands and aces in the fourth set to wear down Ruud and he sealed the win with a mighty serve on match point.

Before the match, a moment of silence was held to honor the nearly 3,000 people who were killed in the attacks for September 11, 2001. The date of the attack was written on the court and both players began their on-court remarks by acknowledging the sombre anniversary.

This year’s US Open broke the event’s attendance record and marked the first time that every session at the 23,859-capacity Arthur Ashe Stadium sold out, tournament organizers said.

While for many years the Flushing Meadows spotlight has shone on the “Big Three” of Nadal, Novak Djokovic and Roger Federer, it was the future of the men’s game – Alcaraz, Ruud, Sinner and Tiafoe – thrilling the crowds this time around.

Alcaraz said he is hungry for more after getting his first taste of Grand Slam glory.

“I want to be in the top for many, many weeks. I hope many years,” he said.

“I’m going to work hard again after this amazing two weeks. I’m going to fight to have more of this.” – Rappler.com