UNITED. Quarterback Josh Allen (17) and the Buffalo Bills react as teammate Damar Hamlin is tended to on the field after a collision.

Facebook Twitter Copy URL
Copied
Damar Hamlin, the NFL player who suffered a cardiac arrest on the field, speaks to his Buffalo Bills teammates via FaceTime after regaining consciousness and having his breathing tube removed

Buffalo Bills safety Damar Hamlin had his breathing tube removed overnight, the team said on Friday, January 6, and a call to teammates from the recovering 24-year-old set off a raucous celebration.

Players leaped to their feet, clapped and yelled as Hamlin appeared from his hospital bed on a FaceTime call during the Bills team meeting on Friday, head coach Sean McDermott said in describing the scene.

“The room went nuts. It was awesome,” said Bills general manager Brandon Beane, who returned to Buffalo on Thursday after staying behind in Cincinnati to be with Hamlin. “The hair on the back of my neck stood up.”

Doctor have said Hamlin is progressing remarkably well after having his heartbeat restored on the field on Monday night.

After making a tackle in the first quarter against the Cincinnati Bengals, Hamlin collapsed, requiring emergency CPR, a scene that stunned fellow players, coaches and fans.

On Friday, Hamlin told his teammates, “Love you, boys,” McDermott said – a moment that seemed unfathomable just a few days ago. Hamlin flexed his biceps and flashed a heart symbol with his hands during the call.

“It was a pretty cool exchange,” McDermott told reporters, describing Hamlin as “an infectious young man with an infectious personality.”

Beane talked about the decision to stay behind with Hamlin while the team returned to Buffalo to prepare for Sunday’s regular season finale against the New England Patriots.

“What would you want someone to do for your son?” he said.

“So we divided up… And that’s why I love Sean (McDermott), we were able to work this through and he did a great job there. But it was a rollercoaster.”

Physicians on Thursday said Hamlin was “demonstrating signs of good neurological recovery” but that it was too soon to comment on his long-term football prospects.

The frightening on-field incident prompted a massive outpouring of support from fans and the football community.

Donations to an online toy drive fundraiser Hamlin launched in December 2020 skyrocketed in response, raising more than $7.8 million as of Friday. 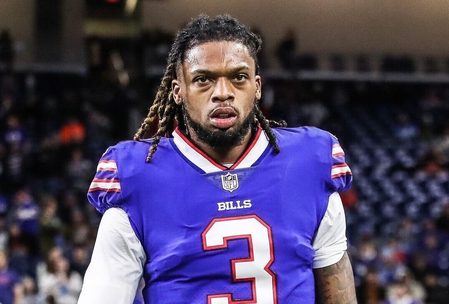 Hamlin, 24, is breathing on his own for the first time since going into cardiac arrest during Monday night’s game in Cincinnati.

Doctors at the University of Cincinnati Medical Center said Thursday that Hamlin had made “substantial” progress although he remained in the intensive care unit, his family by his side.

Dr. Timothy Pritts and Dr. William Knight of the University of Cincinnati Medical Center addressed the media in the first statement from doctors and detailed Hamlin’s recovery as well as the road ahead.

“We would like to share that there has been substantial improvement in his condition over the past 24 hours,” Dr. Timothy Pritts said. “We had significant concern about him after the injury and after the event on the field and he is making substantial progress. As of this morning, he is beginning to awaken and it appears that his neurological conditional and function is intact.”

Still, Pritts said Hamlin “continues to be critically ill” and remains in the intensive care unit. His family remains by his side.

Dr. William Knight noted that Hamlin has been on a “long and difficult road. He has been fairly sick and made a remarkable improvement. He’s demonstrating signs of recovery and improvement.”

Pritts noted that Hamlin woke up Wednesday night and asked via writing whether the Bills won the game. The game was suspended.

Per Pritts, doctors responded to his question with the following: “The answer is yes. Damar, you won the game of life.”

On Friday, the Bills placed Hamlin on injured reserve and activated rookie cornerback Christian Benford (oblique) off the same list. Benford, a sixth-round pick, has 24 tackles and one interception in nine games (five starts) this season.

The NFL announced Thursday that the Bills-Bengals game has been canceled.

On Friday, Hamlin was named the winner of the NFL Players Association’s Week 18 Community MVP award.

The recognition comes with a $10,000 contribution to Hamlin’s Chasing M’s foundation, a toy drive that has received millions in donations since Monday night.

“On behalf of Damar Hamlin, we’d like to express our sincere gratitude and humility towards the NFLPA community for selecting Damar as a NFLPA Community MVP,” Hamlin’s family said in a statement.

“Damar holds firm that leadership is best displayed through servitude, and the community’s generosity will allow Damar to continue serving those in need.”

The NFL held a special league meeting on Friday to vote on changes to the playoff setup after it was decided the Bills and Bengals game would not be completed despite the contest having post-season implications for both clubs.

NFL commissioner Roger Goodell outlined the resolution which could require a neutral site venue for the AFC championship, depending on the outcome of this weekend’s final regular season games.

The Bills, Bengals, and Kansas City Chiefs all have a chance to clinch the No. 1 seed, which comes with a first-round bye.

The AFC championship will be held at a neutral site if the participating teams played an unequal number of games and both could have been the number one seed had a full 17-game regular season been completed.

The location of a wildcard game in the AFC North could also potentially be decided by a coin toss supervised by the commissioner depending on the results.

“Yesterday’s news of Damar’s improving condition lifted not only my spirits but the spirits of the entire league,” began Goodell, during a Friday conference call.

“Today with the owners the reasons for needing to cancel the Buffalo-Cincinnati game were explained.

“Not playing the game (Bills-Bengals) to its conclusion will have no affect on which club’s qualify for the post-season.

“No club could qualify for the post-season and no club would be eliminated based on the outcome of this game.” – Rappler.com