‘The West Philippine Sea is ours,’ says Hidilyn Diaz 'IT'S OURS'. Hidilyn Diaz weighs in on the West Philippine Sea dispute.

After defeating world record holder Liao Qiuyun of China for the Olympic gold medal, the country’s weightlifting queen declared her belief that the West Philippine Sea belongs to the Philippines.

The West Philippine Sea is the part of the South China Sea that belongs to the Philippines but China is claiming it as its own.

Diaz weighed in on the dispute after being asked about a viral photo of her wearing a shirt regarding the matter.

“Sa totoo lang bigay po iyon sa akin (It was actually just given to me),” explained Diaz about how she got the shirt.

But in her own game, Diaz proved that Filipinos do not have to back down from China.

“After winning the Olympics, kaya natin (we can win over China) as ordinary people,” added Diaz.

Gao has become part of Team Hidilyn Diaz (HD), the support crew behind Diaz in several golden conquests such as the 2018 Asian Games, 2019 Southeast Asian Games, and most recently, the Tokyo Olympics. 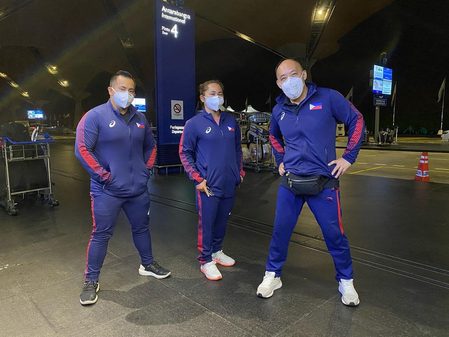 Aside from winning the country’s first Olympic gold, Diaz also set Olympic records with her winning lift of 127kg in the clean and jerk, and the total of 224kg.

Swimmer Teofilo Yldefonso is the only multi-medaled Filipino Olympian after winning the bronze in the men’s 200 meter breaststroke in the 1928 Amsterdam and 1932 Los Angeles Games. – Rappler.com